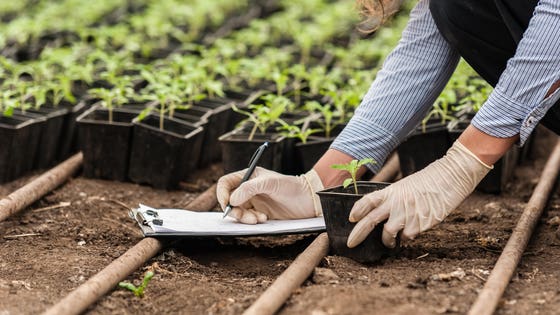 Food security is one of the biggest challenges we’re facing as we move further into this century. Changing climate, pests, stress on water and land are all limiting our ability to produce sufficient amounts of food. making food production an issue.

Synthetic biology offers ways to help produce and supply enough safe and nutritious food sustainably for the estimated 9 billion people that will inhabit the planet by 2050.

Here are a few ways how.

Synthetic biology can break our dependence on fossil fuels for farming. The typical Westerner consumes about 2 gallons of diesel fuel per day. A family of four consumes some 66 barrels of oil each year. How? Most of the food on our plates has been fertilized, grown, transported, processed, chilled, and stored using vast quantities of fossil fuels.

One of the ways synthetic biology companies are changing this is by engineering plants that fertilize themselves. The ammonia that is the base of synthetic nitrogen fertilizer is produced using a complex and energy-intensive process called the Haber–Bosch process. Companies such as Joyn Bio and Pivot Bio are creating plants able to fix nitrogen themselves, biologically, by engineering the microorganisms that live in and on their roots.

For example, Pivot Bio’s first generation microbial product is sprayed in the furrows when corn is planted. In the soil, the microbes adhere to the roots and produce nitrogen to help corn grow.

Making it possible for plants to feed nitrogen themselves will reduce the amount of industrial nitrogen needed to grow crops. That would cut greenhouse gas emissions, reduce fossil fuel use, and reduce water pollution.

﻿The summer fires burning across the Amazon were front page news. Deforestation is occurring to open the rainforest to more farming, logging, and mining. Fires are set to clear the land before grass can be planted for pasture.

In other words, the Amazon, the so-called lungs of the earth, is being burned to graze cows and produce protein. Livestock, according to researchers, contributes nearly 15% of global greenhouse gas emissions, driving further climate change.

Is the public ready for livestock alternatives?

If the stock prices of plant-based meats are any indicator, the answer is a resounding YES!

This year, plant-based burger company Beyond Meat saw its stock gain an incredible 500%. The company has benefited from a near-500% increase in sales to restaurants and food service companies. Other meatless burger products are being introduced by companies as varied as ConAgra, Hormel, Kellogg’s, Nestle, and Tyson Foods. The demand for meatless alternatives is so high that Target stores across the US now have an aisle called Plant-Based Protein.

While those companies protein sources are plant-based, synthetic biology food companies are quickly brewing up meat-based alternatives. They include Aleph Farms, Finless Foods, Memphis Meats, and Shiok Meats. By growing meat in the lab, they are reducing the carbon footprint left by growing chicken, beef, lamb and salmon.

The genetic engineering of foods can help increase crop yields by increasing longevity and survival. The CRISPR gene editing technology may also make crops more nutritious and impervious to drought and pests. This could be important if weather patterns become more extreme as predicted due to climate change.

CRISPR gene editing has resulted in an explosion of research and production of bioengineered foods. Experts predict that in five to ten years, many CRISPR-made foods will be available our local supermarkets.

In the book I co-authored with Karl Schmieder, WHAT’S YOUR BIO STRATEGY? synthetic biology pioneer, Craig Venter predicted, “If we jump ahead 50 to 100 years, I see very little farming because agriculture if fundamentally anti-nature. I see biological factories producing foods. It is more efficient and better for the environment.”

It’s not hard to imagine urban farms. They’re already operational in Tokyo and rooftops across Brooklyn.

Through the use of the CRISPR technology mentioned above, it’s likely we’ll see an increase in localized food production.

Will we see mangoes growing in Montreal? I hope so.

Though we face an increase in population while at the same time confronting challenges from climate change, synthetic biology will help increase the sustainability and yield of agriculture.

In addition, through localized production (or distributed biological manufacturing) synthetic biology will secure supply chains. Companies such as Amyris, Codexis, Evolva, and Conagen, among others, are producing important ingredients that can be brewed locally. Need a sweetener? Amyris can brew up it’s Reb M molecule from the Stevia plant. Need an enzyme to produce sweetener? Codexis can brew up the enzyme with their CodeEvolver technology. Need natural vanilla? Evolva can brew up the molecule using its yeast fermentation process. Need terpenes to enhance the flavor of the food you’re creating? Conagen can brew those up for you.

As in other industries, synthetic biology is already making an impact. And we’ve only just begun.

With synthetic biology offering more answers to securing food supplies, it won’t be long until you can buy lab-grown steak, grill it, and serve it on a rare-grain hamburger bun produced a few blocks from where you live.

Thank you to Karl Schmeider for additional research and reporting in this postPlease note: I am the founder of SynBioBeta, the innovation network for the synthetic biology industry, and some of the companies that I write about are sponsors of the SynBioBeta conference (click here for a full list of sponsors).

10 Coolest Winter Places in America
For The Love Of Ice-Cream: Why An Upstate Auto Dealership Opened An Ice-Cream Shop
Ntsiki Biyela, Founder Of Aslina Wines And One Of South Africa’s Young And Very Talented Winemakers
Hoping to beat the tourist crowd on your trip to Japan? That ship has sailed
Find the best Las Vegas experience for you: 10 trips sorted by travel type