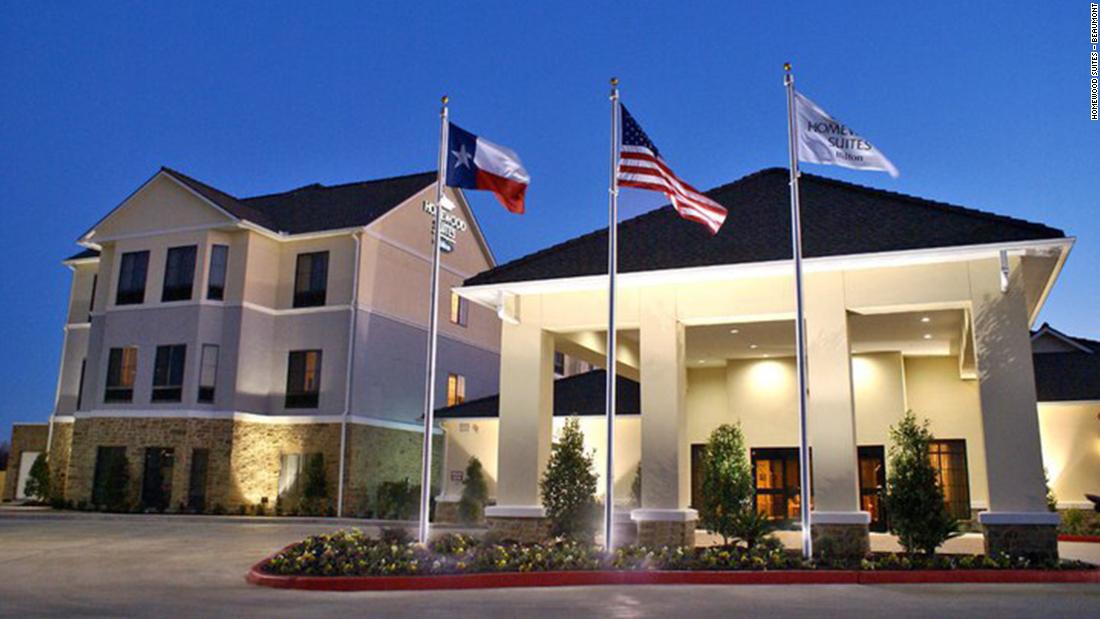 Travel
Share on Facebook
Share on Twitter
Share on Pinterest
Share on LinkedIn
That was until Tropical Storm-turned-Depression Imelda unleashed torrential flooding that trapped him and 90 other guests inside the hotel.
For 32 hours, beginning Wednesday afternoon, the 21-year-old was the hotel’s only employee. But to the guests who relied on him for nearly two days, he’s a hero.
Angela Chandler, a hotel guest, praised Smith’s composure in a post on Facebook, where it’s been shared more than 13,000 times. While flooded roads kept his co-workers from getting to work, she wrote, Smith served guests alone.
“He has manned the phones, answered each of our questions, ensured that we have had a hot cup of coffee or tea, and helped serve us a hot breakfast,” Chandler wrote. “He has handled this situation with grace, kindness, and a beautiful smile on his face.”
For someone trapped at work, he sure seemed cheerful. But privately, the Lamar University track and field star felt overwhelmed, he told CNN.
“It was pretty intense,” he said.
Typically positioned behind the front desk, he was now the hotel’s chef, maintenance man, room service attendant and any other vacant position that needed filling, even when his experience was lacking.
“I’d never worked in a kitchen,” he admitted. “I’m not really a good cook.”
But he resolved to cook anyway. A guest stepped in to help serve breakfast, and a few others joined them to prepare dinner — a simple chicken pasta with garlic bread. He was pleasantly surprised that it tasted good, he said.
“Everyone seemed pretty thankful for it,” he said. “They said it was pretty satisfying.”
Outside, the highways were closed and drivers were stuck in their cars, so Smith and the guests braved the flood to distribute food and water to stalled truckers. After spending so much time together, the group was bound to band together, he said.
“The guests were very helpful,” he said. “It was basically like a big family.”
Finally, after a marathon shift and glowing reviews from guests, Smith’s co-worker made it into work Friday morning. He stayed around for a few hours to help her out, took a brief nap, then woke up and went right back to work until his family could safely drive to pick him up.
The hotel avoided the worst of the storm, with flooding limited to the parking lot, but his car wasn’t so lucky. It’s the second time a storm’s totaled one of his cars after Hurricane Harvey hit in 2017. But he’s managed to find the good in it all: His family’s home didn’t flood.
“Everything happens for a reason,” he said.
This article was originally published by Cnn.com. Read the original article here.
Share on Facebook
Share on Twitter
Share on Pinterest
Share on LinkedIn

The 7 best hikes in Argentina cover every kind of adventure
How to make German currywurst
The best après-ski in Passo Tonale
Margaritaville Hollywood Beach Resort an Upscale âCasual Luxeâ Locale
For The Love Of Ice-Cream: Why An Upstate Auto Dealership Opened An Ice-Cream Shop