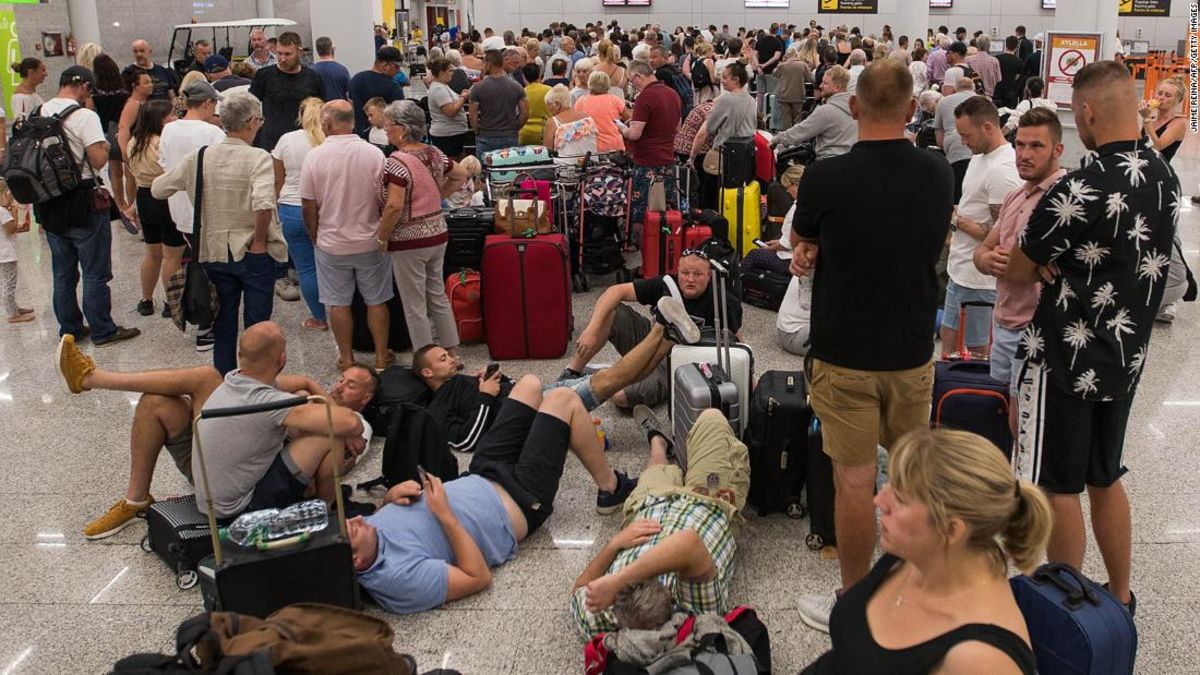 (CNN) — The last scheduled Thomas Cook flight to land shortly after company’s collapse saw flight crew in tears, according to passengers on board, as travelers around the world scrambled to reschedule hotels and flights.

Wendy Willis, 57, told CNN the atmosphere on the flight from Orlando, Florida, to Manchester, England, was very somber before landing at 8.52 a.m.

“A sad day, another big company gone, staff were crying on the plane and ground staff were really upset and tearful,” she said. “But they were so professional and will be a credit to anyone who employs them.”

Willis said she learned of the Thomas Cook’s collapse on Facebook before the flight, which was the operator’s final flight according to Flight Radar.

“We only knew it was Thomas Cook’s last flight just before we landed and it was confirmed by staff after we landed,” she added.

Flights operated by the company have been grounded, hotel bills left unpaid and package vacations thrown into disarray across Europe and the rest of the world by the travel company’s demise.

Newlywed Laura Schofield should’ve been relaxing on Canary Islands’ beaches on her honeymoon this week. Instead, she’s stuck at home in the UK port city of Hull.

“We found out on Saturday morning when my mum rang me after she had watched the news and asked who we were flying, and of course we said Thomas Cook,” Schofield told CNN.

“We were absolutely gutted. We have been together eight years and never been abroad together,” she said. “We have a one-year-old and wanted to have a nice relaxing break for our honeymoon.”

“We were told we might be offered alternate flights but we still haven’t heard anything and as we have our little girl we wouldn’t be able to come home later or anything. We want a refund at this point just so we can try and make the most of this week together before we go back to work.”

Laura Scholfield has had to cancel her honeymoon.

With many affected UK travelers covered by protection schemes, contingency plans were already in place to repatriate them and cover hotel costs, but shock waves from the collapse were being felt in destinations around the globe.

Travelers stuck in airports or waiting for information in their hotel said the situation seemed relatively calm, with plenty of information available about how they will make their way home. Some said the resorts they were staying at seemed subdued following the news.

Sunil Mistry, a London-based TV producer staying on the Spanish island of Tenerife, said the UK’s Civil Aviation Authority’s website was offering clear details about repatriation flights, although no information about his return journey scheduled for September 26 was available.

“For Tenerife, it currently goes up to the 25th [of September], so we’re hoping by the end of the day there will be info,” he told CNN. “It just says future flights will be published in due course.”

He said there had so far been no announcement from his hotel.

“There are no signs for Thomas Cook guests, and nobody mentioned anything at breakfast,” he said. “Right now, we’re still on last night’s dime, check out would be at noon. So if it gets to midday and our room cards are deactivated, we’ll know why.

“But this is a partner hotel for Thomas Cook, so they’ve probably been informed they’ll be paid by ATOL.”

ATOL, or Air Travel Organiser’s Licence, is a UK government-backed organization that guarantees financial cover in the event a travel company ceases trading.

British travelers waiting to get home from Palma de Mallorca.

“As long as I’m home for work on Monday that’s fine, we’ve got three days of wiggle room,” Mistry added. “Ideally I want to get back as soon as I can because there won’t be a hotel after Thursday and I guess we’d be camping at the airport.

“We’re booked till Thursday so I’m not really worrying. Once the flight info is there we’ll have a clearer idea.”

Mistry said the fallout from the collapse of Thomas Cook was palpable in the Canary Islands.

“There seem to be a few more sunbeds available today,” he added. “We’re in Puerto de la Cruz, quite a busy area, and lots of locals and Spanish tourists too. Somewhere more remote like Lanzarote it might feel quieter with this news, but our hotel did say when we checked in that they were fully booked.”

Some travelers already in transit whose flights were not covered by ATOL said the situation wasn’t clear.

“I’ve been here since 8am,” said Fiona Redding, who was stuck at the airport in Menorca, one of Spain’s Balearic islands, waiting to catch a flight back to Bristol, UK. “It’s not clear what’s going on with flights at the moment, the times keep changing (to later and later). I’m flight-only so not protected by ATOL unfortunately.

“There were hundreds here this morning because there are flights going to Gatwick, Stansted, Glasgow, Manchester and Birmingham as well as Bristol.”

The scene in Menorca’s airport.

Redding says her first thoughts went to the employees of Thomas Cook, a reported 21,000 of whom could now be without jobs following the collapse. She said people using the company’s demise to make political points about the UK’s Brexit process should consider those most affected.

“I just feel for the employees,” she told CNN. “I’ll get home eventually but they won’t have a job to go back to. People writing all this vitriolic stuff about Brexit would do well to remember there are real human beings who will be impacted today and beyond.”

For The Love Of Ice-Cream: Why An Upstate Auto Dealership Opened An Ice-Cream Shop
15 of the world’s most stunning islands for every kind of traveler
Amsterdam: Only Red Lights & Weed?
🔴 Unforgettable Evidence Captured This Season | Ghost Adventures | Travel Channel
The best hotels for woodland walks in Britain this winter