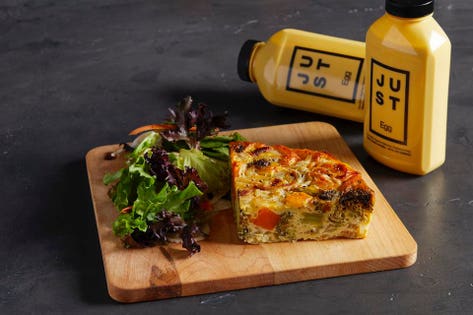 There’s a reason most plant-based companies start their product lines with a burger. Sure, figuring out the aroma, sizzle and taste of beef is a challenge, but mushing plant protein into a patty is far easier than trying to replicate the light and fluffy texture of scrambled eggs. Still, that’s exactly what JUST, Inc. is aiming to do with its plant-based egg product made from an ancient nitrogen-fixing legume—mung beans.

The search for the perfect protein

The first part of the process is to find the right plant-based protein for the task, which, in this case, means finding one that functions as closely to eggs as possible. Watching the company’s “Ten Steps” video below, you might get the idea that this was one of the simpler steps, but, well, that idea would be wrong.

In the video, a researcher stands between two computer screens, clicking away on his keyboard. Seconds later, a protein cooks up into a gel-like texture in the pan. Magic, right? Well, that doesn’t quite match up with reality, says chef and Vice President of Product Development for JUST, Chris Jones.

“There were so many failures,” he says, including the time “one of our research scientists…gathered everyone because he had found the perfect egg protein.” Oh, the anticipation.

Those early failures motivated the company to look for ways to speed up the process, including investing in technology like the protein-identifying discovery platform you see in the video. “The discovery platform is a really cool tool for us,” says Jones, who is also an alum of the famed Chicago restaurant Moto.

“It kind of started out of necessity,” he explains, since “there are only so many plants out there that are commercially available.” The platform takes all of those possible plant proteins and eventually culls them into a manageable list. Someone like Jones or Senior Scientist Meng Li will then comb through that list, on the hunt for the perfect plant protein for the job.

In evaluating these proteins, says Jones, “the things that we’re looking at are where is it coming from, the sustainability behind the products, what is the protein yield,” criteria that helps the team match up these proteins with the appropriate plant-based food. In this case, it turned out mung beans were a perfect match for making eggs.

JUST uses a robotic system to test its proteins

Once the team decided on mung beans, they needed to put the protein through the ringer, testing it over and over and over again to make sure it could be successfully commercialized. That’s a mind-numbingly exhausting process, says Li, which is why the company eventually began mechanizing those tests to make their lives easier.

“A lot of the work is actually very repetitive,” she explains. “It’s very labor intensive…and you actually don’t need a human to do it.” Having robots take care of that early testing now frees Li up to think about the bigger questions, like how mung beans fit into the company’s big picture, for example. JUST uses a very unique system of robots designed specifically for them, she says. “They’re one of a kind.”

The functionality of an egg is more complicated than you might imagine. Eggs can be used to thicken and bind but they also cook up in a very particular way, a slightly custardy, three dimensional network of protein and water, the process of which is called “gelation.”

Eggs can also provide the foam stabilization we see in a meringue, the humectancy that helps keep baked goods moist and the crystallization control needed for frozen dairy desserts like ice cream.

JUST’s mung bean protein isolate has that custardy gelation property, as well as the ability to thicken, emulsify and bind in foods like waffles, pancakes, omelettes, and even some of the denser baked goods like cookies, brownies and quick-breads (just don’t go baking anything too light, like an angel food cake). The company’s scientists have also discovered some frozen ice cream-like applications, but you can’t make a meringue with it just yet, at least not with the current version of the product.

Mung beans have been cultivated for thousands of years

The protein’s functionality isn’t the only consideration, however, since the research team also has to think about sourcing and sustainability. Mung beans are grown throughout the world (though JUST declines to identify specific growers), and, like most pulses, the beans are a nitrogen-fixing crop.

“They can actually grab the nitrogen from the air and put it back into the soil,” explains Li, who has a PhD in food science and nutrition, and is a former FDA researcher. Nitrogen-fixing crops often require less or even no fertilizer at all, making them a more sustainable option than corn or soy, for example.

Crops like corn and soy aren’t nitrogen-fixing on their own, though several synthetic biology companies are working on solutions to help them fix their own nitrogen. Still, JUST is sticking with mung beans, at least for its egg product. Mung beans are also highly adaptive, points out Li, who says “they can grow at high altitudes, [requiring] low water and low moisture.”

But how does it taste?

Once the mung beans are harvested, they are then dehulled and milled, eventually refined to a powder-like isolated protein that’s mixed with several other ingredients to form JUST’s liquid egg. Ingredients like turmeric and carrot add color, while onion and even the pasteurization add slight flavor notes.

“We’ve done a lot of work with our processing to give the protein a neutral flavor, but it does have a taste to it just like anything else in the world,” says Jones. “Onion gives it a bit more of a savory note, that’s why we put it in there, and it also has reverberations of sulphur.”

JUST Egg costs more than conventional eggs, but the company hopes to eventually bring the cost down to something closer to chicken eggs. It’s typically priced at just under $8 for a 12 ounce carton, and is sold at retailers like Krogers, Walmart and Whole Foods.

This month, you can even sample a frittata made with JUST egg and almond milk at the fast casual chain Le Pain Quotidien, to see for yourself whether these mung bean eggs can fool you.

The JUST team has at least managed to satisfy one of their more discerning tasters. Jones’ own daughter is shown eating JUST egg at the end of the video. She tastes just about all of JUST’s products, according to Jones, including some of the foods that haven’t even been released, like the cultured chicken nuggets. That’s one very expensive after-school snack.

How to get around New York State by train, plane and automobile
Online Sales Of Alcohol Predicted To Rise 34%
Why you could skip Musée d’Orsay to visit this artist’s house-museum instead
2022 gift guide: 10 best gifts for families who love to travel
Amsterdam: Only Red Lights & Weed?