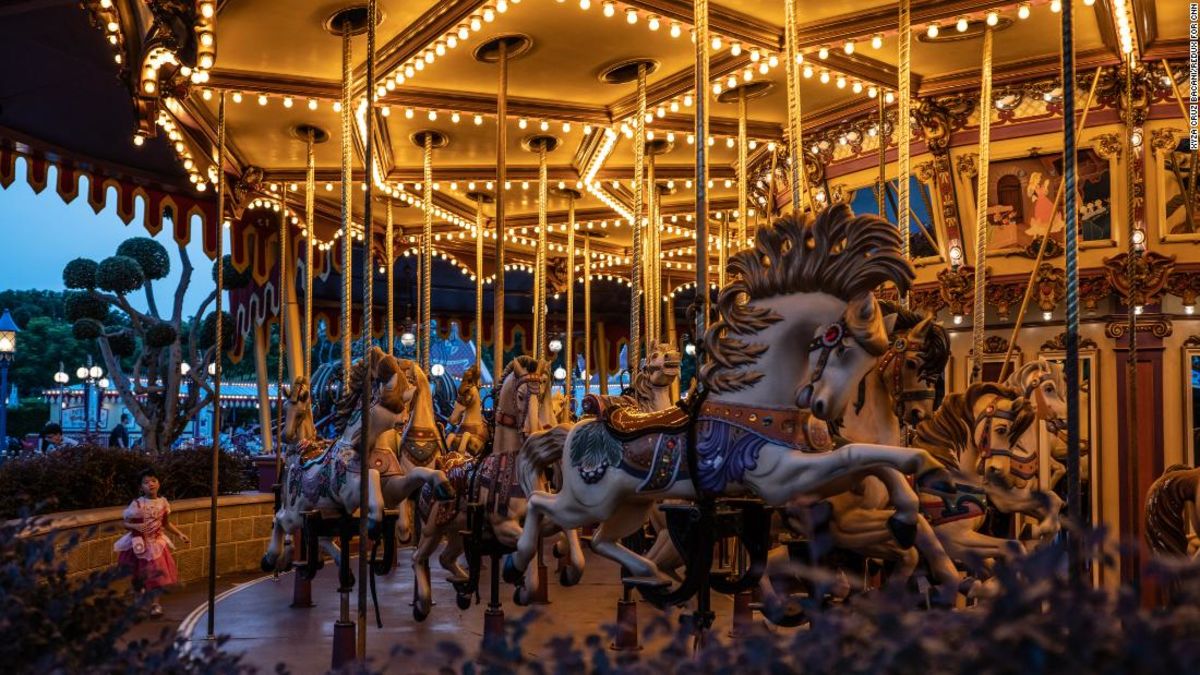 (CNN) — It was Friday, sunny, and at the end of summer — all the perfect components for a day at Disneyland. The theme park should have been packed.

Instead, a recent visit to Hong Kong’s very own “Magic Kingdom” saw empty lines and sparsely populated streets, a far cry from its usual crammed crowds.

Lines for the rides, which usually take upward of half an hour’s wait, were short and quick — if there were any lines at all. The rides themselves were nowhere near full capacity — at the Mad Hatter Tea Cups ride, most of the giant pastel teacups spun emptily to the cheerful music. At lunchtime, visitors had their pick of empty tables.

It was a sad scene, and it’s been like that most of the summer as Disneyland became the latest casualty of the Hong Kong protests.
The pro-democracy protests have been raging since June, and have hit Hong Kong’s economy hard. The tourism, retail and hotel industries are all “suffering,” said Paul Chan, Hong Kong’s financial secretary, in a blog post on September 8.
In his comments online, Chan said tourist arrivals only dipped slightly in July, with a 5% decrease from the same time last year — but they absolutely plummeted in August by 40%.
The hotel sector is also suffering, said Chan — some have seen occupancy rates halved, and room rates have fallen 40-70%. Meanwhile, the Hong Kong International Airport saw 12.4% fewer passengers in August compared to the same time last year.

This decline in tourists was written large and clear all over Disneyland. Inside the Hyperspace Mountain ride, the winding fenced path meant to accommodate a long line was largely empty. Some tourists at It’s a Small World had the boat all to themselves, sitting solitary in the empty rows.

The low tourist numbers were especially striking during the peak summer season, when students are out of school and families are on holiday. But this summer has been anything but normal, and as the city enters its 16th consecutive week of mass demonstrations, the happiest place on Earth is feeling the heat.

Travelers worldwide are staying away

When violence spiked in July and August, global news outlets broadcast images of the unrest to the world — tear gas, fires, and bruised lashes across a man’s bare back.

Protesters themselves deliberately worked to reach global audiences — they crowdfunded enough money to take out full-page ads in major newspapers worldwide, and thousands occupied the airport with signs directly appealing to arriving travelers.

It seems those messages and images have had an effect — dozens of countries have issued travel warnings for Hong Kong, and travelers are staying well away.

“There are particularly few visitors this summer,” said a Disneyland employee who declined to be named. “Everyone is on holiday, so there should be more people coming in. But there are fewer tourists.”

The low number of visitors at the moment was “not normal,” she added.

For Afaizul Ashari, a tourist from Malaysia, this was his second visit to Hong Kong’s Disneyland. Last time, before all the political unrest, he recalled baby strollers stretching all the way up the street. Now, there were only a handful parked on the side of the walking path.

According to the Airport Authority, the biggest decline in passengers arriving into Hong Kong in August came from mainland China, Southeast Asia and Taiwan.

The decline of mainland Chinese visitors is hardly surprising, with a strong anti-China sentiment among the protest movement and an increasingly harsh stance from Beijing.

Chinese officials have characterized the protests as showing “signs of terrorism,” and in a recent commentary, state media agency Xinhua warned that “the end is coming for those attempting to disrupt Hong Kong and antagonize China.”
Still, the China-Hong Kong tensions do strike a particularly hard blow to Disneyland and the tourism industry as a whole — mainland Chinese tourists make up 76% of the city’s annual visitors, according to the Hong Kong government.

The Disneyland employee said there were still normal numbers of tourists from Japan, Korea and other nearby countries — but there was a significant dip in Chinese tourists. The number of tourists dropped most sharply in August, she said — reflecting the tourism statistics Chan had cited in his blog post.

Tour groups and travel agencies from the mainland may also be suspending trips to Hong Kong. According to the Travel Industry Council of Hong Kong, which issues travel agent licenses and approves tour group itineraries, August saw a 63.4% drop in tour group registration compared to the same time last year.
Mainland tourists might now choose to make their way to Shanghai’s Disneyland instead, which has been a major competitor since it opened in 2016. The park had 10 million guests in its first 11 months — by comparison, Hong Kong’s Disneyland only had 6.1 million visitors in the 2016 fiscal year, and 6.2 million in 2017. With the protests further hurting Hong Kong’s figures, a comeback now seems unlikely.

The tourism industry is hurting

In many ways, Disneyland still looked like Disneyland — speakers blared music from “The Lion King” and “The Little Mermaid,” food stands sold snacks and cold drinks, and families strolled through the park.

And yet, the empty lines and lack of crowds were jarring and impossible to ignore, adding a hint of unease to the atmosphere.

“It’s a bit subdued,” said Annamarie Devitt, who was visiting from Sydney with her husband and two children. “It’s just not the buzz of Disneyland that I expected.”

Shaun and Annamarie Devitt with their children Jameson and Felix inside a restaurant in Hong Kong Disneyland Resort.

Photos on social media and local media showed similar scenes of near-empty rides and streets in Ocean Park, Hong Kong’s other theme park. Ocean Park’s attendance numbers had “remained stable” in 2016 and 2017, but it has not yet released visitor numbers for 2019.

Disneyland has begun promoting its annual extravagant Halloween celebrations, which typically draw big crowds. This year the event includes a themed parade and a show featuring Disney villains — but even if Halloween saves the theme parks, others in the retail, food and tourism industries in Hong Kong may take longer to recover.
Major hotels are asking workers to stay home — in some cases, for no pay — as business slows down. Meanwhile, union officials told CNN Business that restaurants are laying off workers and forcing them to take unpaid leave. At least 700 restaurant workers have lost their jobs since June, according to an industry union.

How to respectfully engage in Indigenous tourism in British Columbia
Discover USA: North Dakota
New In Silicon Valley: TETRA Hotel, an Autograph Collection Hotel
Do I need a visa to visit Switzerland?
What NOT to Do at a Beer Garden