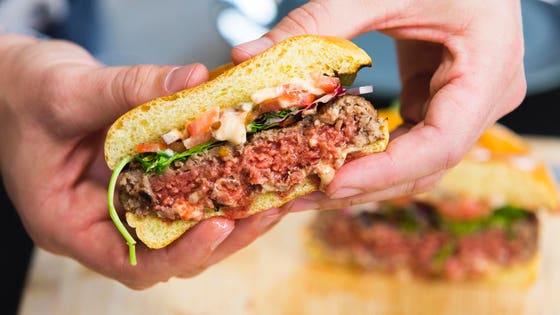 Meatless meats may soon be a staple of the backyard barbeque thanks to the Impossible Burger. Beginning Thursday, September 26, the meatless patty from Impossible Foods will be available at Wegmans stores in seven states and at two Manhattan outposts of Fairway Market. The arrival of the Impossible Burger to East Coast grocery aisles comes a week after it made its supermarket debut at locations of Gelson’s Market in Southern California.

“There’s a growing demand for plant-based options, so the fact that customers will now be able to prepare Impossible Burger at home is a big deal,” Ann Johnston the category merchant of Wegmans, which has stores in New York, Pennsylvania, New Jersey, Virginia, Maryland, Massachusetts and North Carolina said in a statement.

At all 100 Wegmans locations and at Fairway Market locations on 74th Street and 86th Street the Impossible Burger will be sold in 12-ounce packages for $8.99.

Chances are you’ve spotted the Impossible Burger on a restaurant menu, you may have even tried it. In development since 2011, the burger debuted in 2016, at Chef David Chang’s NYC restaurant Momofuku Nishi, as a plant-based burger that meat lovers would find similar to ground beef. Today, the burger is sold at restaurants throughout the United States, as well as overseas in Hong Kong, Singapore and Macau. But until this month, the burger wasn’t available to home chefs.

Made from plant-based proteins, vitamins, amino acids, sugars, heme, culinary binders and fats such as coconut oil and sunflower oil, the Impossible Burger has a similar texture and feel to a traditional burger and can be cooked much the same, rare to well done, seasoned to preference and topped however you want.

Interest in meatless meats and plant-based diets have skyrocketed in recent years as eaters become increasingly curious about how their food is made and aware of the implications their food choices have on their health and the health of the environment. A report published earlier this year, by global consultancy AT Kearney, suggested that by 2040, 60% of “meat” could be created in labs or come from plant-based products. Beyond Meat became a Wall Street darling, earlier this year after shares of its stock rose more than 700% from its initial public offering. Companies including Tyson Foods, Perdue and  Nestlé have all announced they’re entering the the plant-based market.

Yet, meatless meats companies such as Impossible Foods have faced criticism and questions over how good for consumers their food actually is. But if the Impossible Burger’s first full weekend on sale in Southern California, where it outsold ground beef in both revenue and number of pounds is any indication, supermarket consumers are willing to give it a chance.

Welcome To The Year Of Yaupon Tea
A 5,000-Year-Old Cheesemaking Tradition In Armenia
Eat Local If You Want, But Not For Climate Reasons
Here’s where mainland Chinese traveled overseas for the Lunar New Year
The top 6 road trips in Great Smoky Mountains National Park