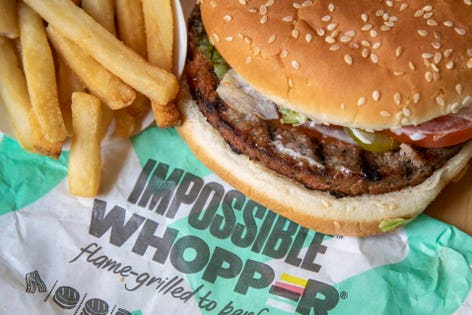 Okay. I caved. I gave into the hype, the pumped-up curiosity, and the supposed alchemy behind this act of rooftop-heralded gustatory bravado. For the first time in probably half a decade I walked into a Burger King, ordered an Impossible Whopper, and ate the damned thing.

And the only thing I find impossible is why the hell would I ever eat another one.

No, it’s not a lie. Does the Impossible tastes just like a Whopper? You bet it does.  t’s just as bland, flat and dry-mouth inducing as the real thing. And if this is your standard for satisfying dining, knock yourself out. Buy two. Obviously, I’m not a fan of fast food; first of all, I don’t believe in eating fast, on the run, or using plastic silverware, but what really bugs me is the unshakeable belief that fast food’s surreptitious goal is seducing you into picking up a salt shaker and eventually devouring soda by the mini-bucket.

Where’s the hosanna in recreating mediocrity? If you think you’re eating healthier, you’re nuts. There’s no reason to waste time here in supplying the chemical breakdown and production on an Impossible Burger because its composition is easily available online.  It offers nearly the same nutritional value and calories as the main attraction.  It’s cheap and you get what you pay for.

But, c’mon, who chows down on a hamburger because it’s healthy? However, a truly great burger glorious sensual indulgence, and when they’re glistening with the perfect chopped blends of Pat Le Freida chuck and sirloin, or Wagyu beef, short ribs, bloody jeweled bursts from Black Angus beef, surrounded by brioche buns, jalapeno jam, stout mustard, sherry vinegar-soaked pickles, the sensation is some of the most fun you can have with your clothes on.

A great burger is epic unapologetic hedonism, like two pieces of Schaffenberger’s That Chocolate Cake, or a Cher concert.  You can sense it even before you experience it and the fulfillment of that anticipation is everything that makes life at first bite perfect.

The Impossible Burger is a stunt, except only the publicity is juicy.  Worse still, its origins are rooted in foolhardy hypocrisy.   Years ago, due to a serious medical condition, I was required to follow a macrobiotic diet for nearly two years, a process that manifested a rack of cookbooks, each determined to do its damnedest to make tofu and seitan take like chicken steak, turkey, or bacon. Not one recipe succeeded to pull off the ruse. The point was, why bother to induce such a scam. Seitan doesn’t look, feel, handle or cook like steak. It looks like shaved elbow patches. In fact, it was easier to deal with it when you just realized exactly what it was.

And yet, we are still perpetuating this kind of three-card monte cuisine, like demonizing potatoes and pretending mash cauliflower is just as delicious, or, calling it “steak” on a menu when it’s sliced thick and broiled, or diet plans that pretend you can’t tell cauliflower flour from real pizza dough. Try that one out at the New York’s San Gennaro festival and you’ll get pelted with old zeppoles.

Elevating the Impossible Burger to its current level of admiration comes close to the ultimate perverse switcheroo, which was fashion’s one-time obsession with creating amazingly lifelike dead fake fur. Not fun fur, the stuff that is obviously not trying to imitate a slain skin but it just soft, silly and cuddly and all over the Burlington Coat Factory and Target.  No, I mean the lengths to which certain designers, whose life-long veganism I was happy to be respected and laud, to create a four-figure priced product that is a near perfect approximation of a garment whose aesthetic is derived by a process they find brutal and repellent.   All that skill and effort to duplicitously imitate what you ethically and morally despise. If you hate fur, banish it from your life.

And if you want to avoid meat, then just don’t eat it.  There are now so many chain restaurants nationwide, such as Sweetgreen, Panera, Pret-a-Manger, Noodles & Co, Tender Greens, each serving nourishing, flavorful sustainable food that isn’t trying to be anything that what it says on the swipe-able bar code.

You want to know an Impossible Burger? Fine. I promise you won’t be able to tell the difference. How comforting to know that there is such consistency in mediocracy. Just remember to buy a really big Coke. You’ll need it to wash it down.

This Hidden-Gem Ski Destination is a Small-Town Winter Wonderland
8 Little Ways To Sneak In Self-Care On A Flight
An expert guide to ski holidays in Avoriaz
8 treks for discovering Vietnam’s rural heartlands
Ntsiki Biyela, Founder Of Aslina Wines And One Of South Africa’s Young And Very Talented Winemakers