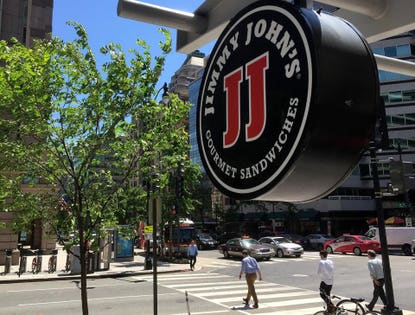 I’ve had the chance to see Jimmy John Liautaud speak a few times at various conferences throughout the years, and I’m always struck by his vociferous, unapologetic approach to the cutthroat restaurant business.

Indeed, his is a colorful story in an industry filled with legacy brands and uniformity. This is a guy who has defiantly rejected third-party delivery companies while most brands have sprinted toward them, for example. This is a guy who wasn’t satisfied with the contract or quality of a potato chip vendor and therefore went out and made his own chips.

This is a guy who built the Jimmy John’s Gourmet Sandwiches from scratch in 1983 while he was a student at Eastern Illinois University, and turned it into a nearly 3,000-unit chain generating $2.15 billion in sales.

In other words, Liautaud is (from an industry coverage perspective at least) a guy who likes to be in control.

So, it may come as a bit of a surprise that Inspire Brands Inc. has acquired Jimmy John’s for an undisclosed amount, adding to its portfolio that also includes Sonic, Arby’s and Buffalo Wild Wings. As part of this deal, Liautaud will relinquish much of his control by stepping down as board chairman. It’s worth noting that he will continue to serve as an adviser.

A deeper look at the restaurant space, however, proves that this move isn’t surprising at all, for Liautaud, for Inspire Brands and certainly not for the industry.

Simply put, the restaurant space has become oversaturated. There are too many places to eat and there is too much competition. As such, chains across the board, from Subway to Applebee’s, have spent the past few years retrenching as the industry corrects itself.

Couple that with rising labor costs and a number of other headwinds (food costs, real estate costs, technology costs, name it) and consolidation seems to be one of the few–if only –ways left to grow and to do so efficiently.

Liautaud hinted at this in a letter to Jimmy John’s suppliers and vendors and reported by the Wall Street Journal, noting Inspire’s buying power and technology would lead to more efficiency and profitability.

Restaurant Dive adds that Jimmy John’s is expected to benefit from Inspire’s entire system, from its analytics platform and product innovation, to its marketing, development and supply chain purchasing power.

No doubt the ability to pool resources and, perhaps more importantly, share learnings across brands is a tremendous advantage in such a competitive space. KFC does this, for example, with its Yum! Brands sister chain Pizza Hut. In May, Gavin Felder, KFC’s chief strategy officer, said: “We’re not starting from scratch, we’re learning from what Pizza Hut has learned around data science, loyalty, performance marketing and how to wrap that all within an app experience.”

Popeyes also seems to be leveraging its holding company’s resources. The company recently planted a flag in China through TFI Tab Food Investments, which has been operating its Restaurant Business International sister chains Burger King and Tim Hortons in that market for years. This should provide a seamless entry for Popeyes, and the mutual benefit of familiarity for TFI.

These types of advantages will especially come in handy for Jimmy John’s as it fends off a particularly feisty sandwich category. According to Technomic, the number of fast casual sandwich chains with more than $50 million in annual sales increased 70% to over 7,500 in the past five years.

Such advantages are also why the mergers and acquisitions rumor mill has been churning rapidly of late (is RBI buying Papa John’s? Wendy’s?) and why the actual M&A market is on a tear–growing at a 9% CAGR throughout the past five years.

With the Jimmy John’s acquisition, Inspire Brands becomes the fourth-largest U.S. restaurant company, according to the Wall Street Journal. And it’s not done: Inspire CEO Paul Brown himself has made it clear that he wants to grow the company’s empire to “about 10 chains.”

Whether or not Inspire hits that goal, we can expect such consolidation across the industry to continue as cost pressures mount and efficiency becomes more critical than ever.