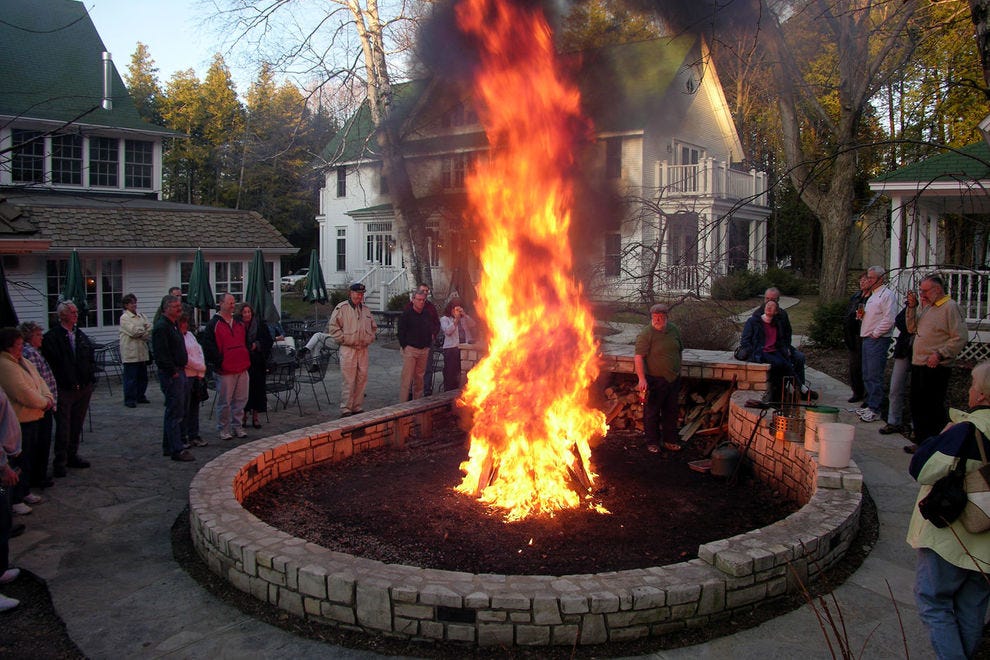 The dinner bell has nothing on the finale of a Wisconsin fish boil. During the boil over, cooks pour kerosene on outdoor bonfires heating large pots of boiling water packed with fresh whitefish and potatoes. This fuel shoots flames some 15 feet into the air – an awe-inducing announcement that dinner is ready.

Diners may come for a local meal, but let’s face it: they’re also there for the spectacle. Regardless of whether people turn up for the food or the dramatic finish, the occasion brings people together. The tradition has spread to the likes of Oshkosh and Green Bay, but its epicenter is Door County, Wisconsin.

The county is made up of a handful of charming small towns sandwiched on a peninsula between Lake Michigan and Green Bay, northeast of the city of Green Bay. There, hungry Scandinavian fisherman created the fish boil in answer to a practical need: feeding as many hungry mouths as possible.

Although fish boils’ official starting date is nebulous, master boilers (chefs that double as flame throwers) point to the turn of the 20th century, when commercial fishermen lived in remote camps. They’d dock, clean their catch and throw some of it into a large vat of boiling water to dish out meals for the whole encampment. The tradition also caught on among lumberjacks, who were in Door County’s other prominent industry of the time.

In the 1930s and ’40s, churches and other companies, including ship building outfits, picked up the tradition. “From there, it became Door County’s answer to the backyard barbecue,” says Andy Coulson, longtime owner of The White Gull Inn, in Fish Creek, Wisconsin. Coulson believes just about every resident family in the county owns a large pot for these occasions.

In 1961, The Viking Grill, in Ellison Bay, began serving fish boils to the public on a regular basis – the first establishment to do so. The White Gull Inn followed shortly after. It’s the only Door County restaurant offering fish boils – traditionally a summer occasion – year-round.

Fish boils began when eating local was a necessity, not a trend. However, the dish continues to give today’s diners regional flavors. “This is a meal that’s so native to this peninsula,” Coulson says. Master boiler customarily use whitefish – the species, not the adjective – freshly caught from Lake Michigan. 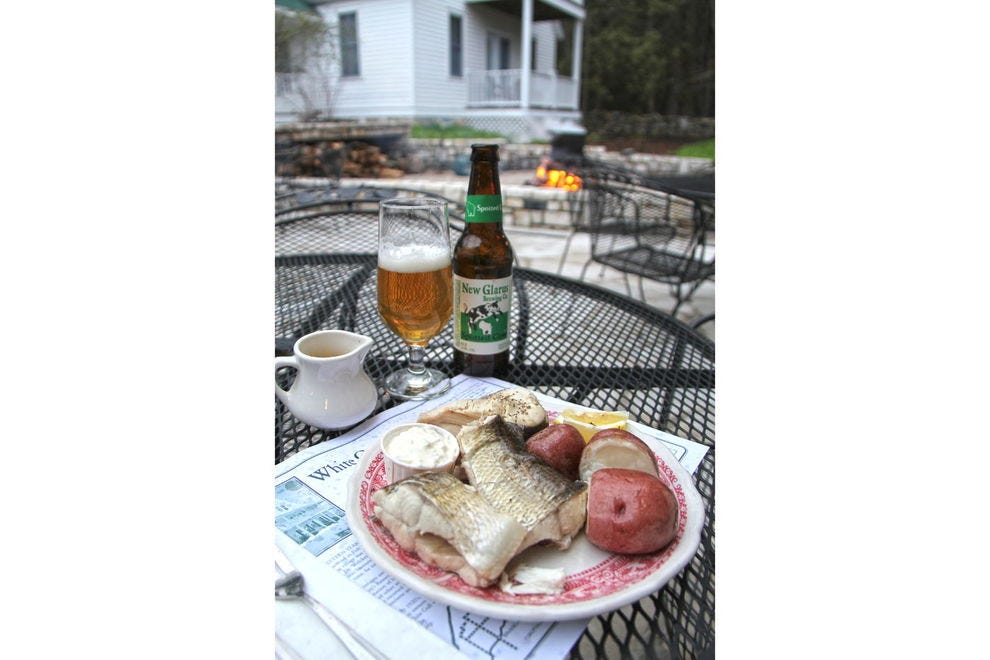 Ken Koyen, owner of KK Fiske Restaurant, on Washington Island, is a commercial fisherman who uses his catch for his restaurant’s fish boil. Sometimes diners at KK Fiske eat fish just an hour out of the water. “It definitely adds to the experience,” Koyen says. “Freezing fish doesn’t do it any favors.”

Usually, fish is tossed into pots of boiling water in steaks – bones and all. The bones keep the fish from flaking apart in the pot, but must be removed at the table. It lends the meal the same rustic enjoyment of cracking crab or crawfish shells.

Potatoes, often grown in Door County, are the only other standard ingredient in the fish boil. Some restaurants add sweet white onions, too. The only traditional seasoning is salt. Lots of salt. Chefs may add a pound for every couple gallons of water.

The White Gull Inn cooks in a 22-gallon pot, dishing out enough food for up to 85 diners at three seatings a night throughout the summer. 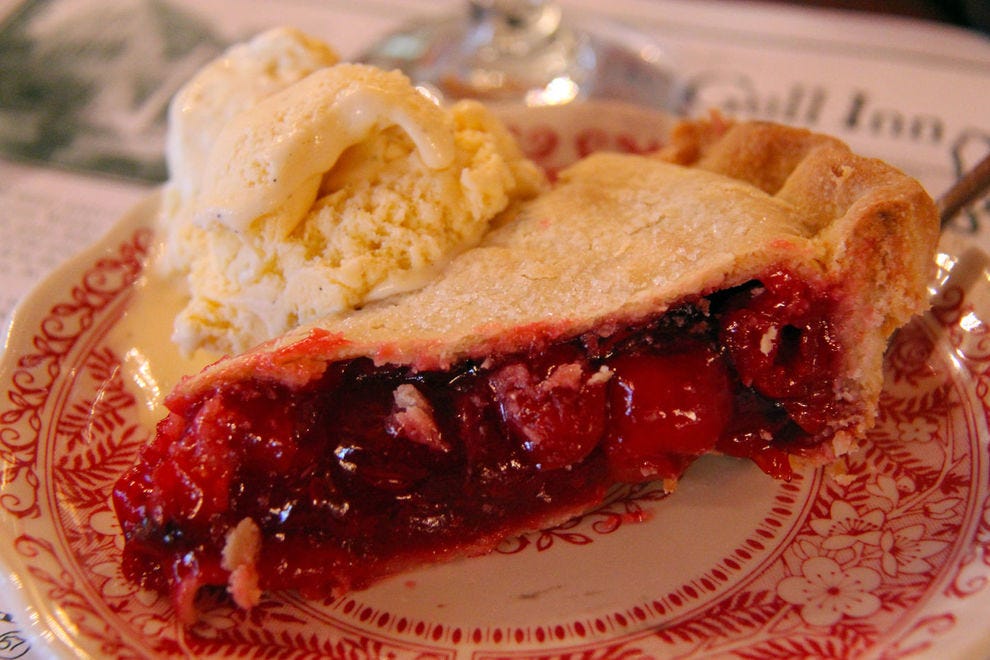 Some master boilers, like Koyen, modify convention. He uses fillets, a larger cut that doesn’t have bones, which he pins to a board during the cooking process to prevent it from flaking while boiled. He also seasons his fish boil with pickling spices and bay leaves.

The White Gull Inn makes a variation in the traditional meal, too, though this one nods to Door County history. The Inn bakes its rye bread in the Swedish limpa style as a nod to the area’s Scandinavian heritage. 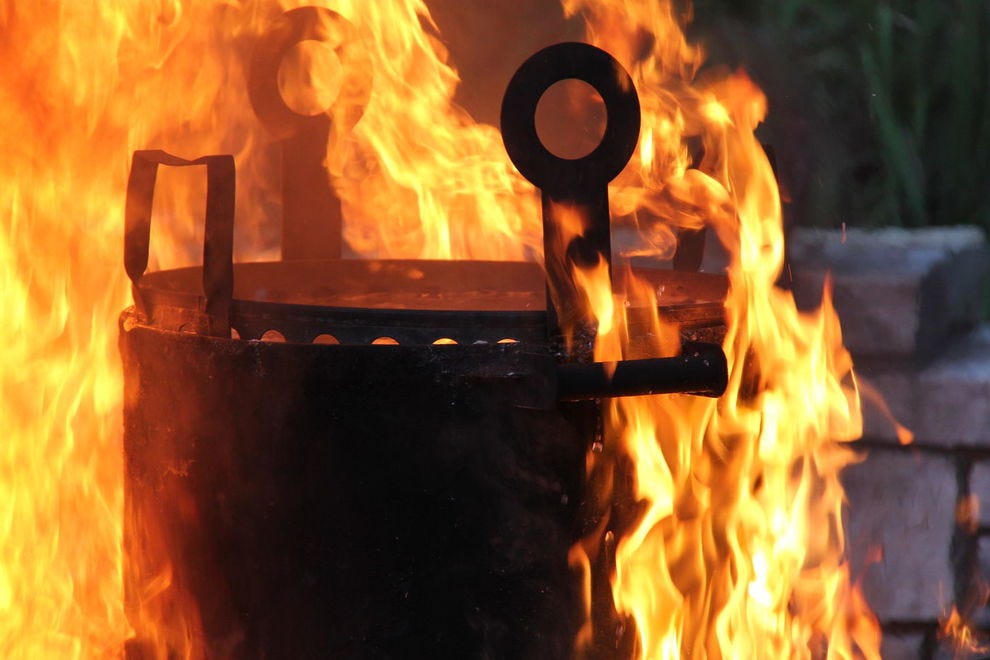 Of course, diners don’t just come for the meal. They come for the show. “I think the boil over is part of why fish boils have become popular. They’re like having fireworks at the end,” Coulson says. But that wall of flames has a purpose.

Master boilers douse the bonfire in kerosene to get the pot to boil over at the end of the cook. As the water cascades over the sides, it takes with it any impurities like potato skins, fish skin or fish oil. Essentially, it cleans the fish and potatoes, so the meal can be served immediately.

The Midwesterner says, “The appeal of the drama and excitement is part of it. But it wouldn’t be done if it wasn’t necessary.”