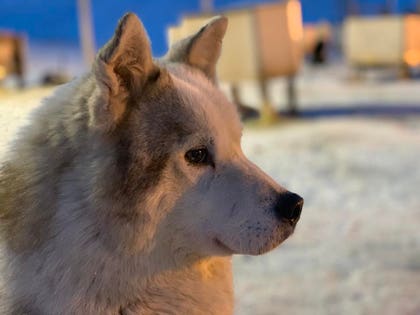 Ask seasoned travelers to rattle off their ultimate bucket list destinations and a pronounced pattern will emerge. The adventurous among us tend to prefer places that are off the beaten path. Way off. Places like Antarctica, Easter Island, Tasmania, and Greenland are often cited because of their geographic remoteness. The difficulty associated with getting there is a feature, not a flaw. If far-flung journeys inspire your sense of wonder—and wanderlust, Svalbard is perhaps a name you already know. If not, let me introduce you to polar paradise.

Polar night shrouds the land in darkness for four months of the year and residents are required to carry firearms outside the town to protect themselves from carnivorous wildlife. Yet despite the rugged realities of daily life, Longyearbyen is a surprisingly cosmopolitan hub. An unincorporated territory of Norway, it has managed to capture some of its parent’s penchant for cutting-edge design and world-class gastronomy.

Book a stay at the Basecamp Explorer for a well-curated slice of Svalbard. The luxury hotel is appointed in a log cabin aesthetic, where rooms are more like cozy bunks featuring fur rugs and driftwood-fashioned furnishings. As much an adventure outfitter as it is a lodge, Basecamp affords its guests exclusive opportunities to interact with the surrounding wilderness. Dogsledding, snowmobiling are popular in the winter months, while kayaking, and arctic sailing excursions open up in the summer.

Alternatively, budget-friendly accommodations can be secured at the Funken Lodge, where rooms start at around $250/night during the spring months. For that price you’ll get to enjoy the sharp edges of a snow-capped fjord outside your back window.

Most of the Longyearbyen’s population is seated at the foot of a steep mountain valley, where it meets the Isfjorden—a broad inlet off the Greenland Sea. Craggy peaks are never far from view. Nor is quality dining. At Stationen, an open kitchen serves a ‘Moby Dick Burger’—made from whale and served with pea puree and lingonberry spread. A charcuterie on the menu features cured Norwegian meats, which are often paired alongside a local craft IPA from Svalbard Bryggeri.

Downtown Longyearbyen is centered around a 6-block long stretch of shops, restaurants and bars. At the center of the promenade is the Miner’s Memorial Statue, honoring the legacy of the  coal workers who settled this distant frontier in the early parts of the 20th Century. They could never have imagined the urban trappings that would spring forth from their industrial outpost.

Up a hill, on the edge of town, you’ll find the newly opened Gruvelagret. Built into a converted wooden mining house, the kitchen here offers refined tasting menus showcase the local flora and fauna. Reindeer, foraged mushrooms, and mosses make frequent appearances. Just down the street is Huset, where you can enjoy the house baked rye underneath a tartare of bearded seal. It’s also home to the largest wine cellar in all of Scandinavia.

Indeed, Longyearbyen is full of surprises. But its most shocking secret might well be accessibility. Once summer emerges, the midnight sun places the polar night as distant memory. Temperatures climb to a balmy 45 degrees Fahrenheit come July. Tropical it is not, yet you’ll still find it hospitable for late night kayaking and seal spotting. Snowmobiling past polar bears at 2am isn’t an uncommon occurrence in this part of the world. And should you brave the long dark night of winter, you’ll be rewarded with one of the world’s great viewing platforms for the Aurora Borealis. Positioned dead center of the ‘auroral oval’, with scant light pollution, the only thing preventing the spectacle on any given night is cloud cover. Scandinavian Airlines offers a direct flight out of Oslo, daily. In three short hours you’ll touch down at Svalbard Airport—which, you might have guessed, is the northernmost commercial airport in the world. For a land of intoxicating extremes, it is a destination extremely well-within reach.

How to get around Toronto like a local
Amsterdam: Only Red Lights & Weed?
The 7 best hikes in Argentina cover every kind of adventure
Getting around Vancouver: How to see the city’s best sights, with or without a car
MY NEW FAVOURITE COUNTRY