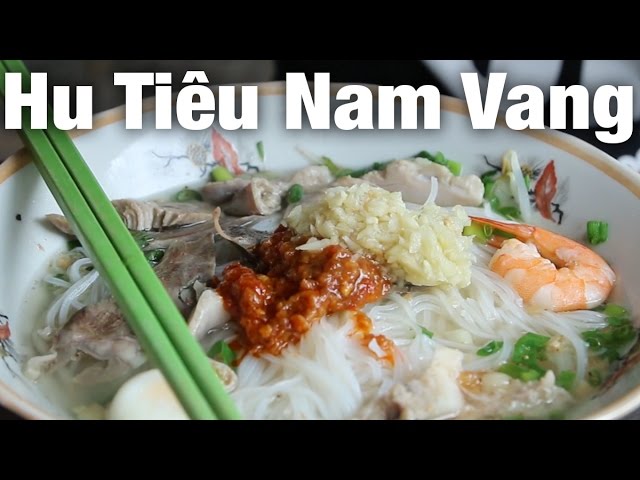 Although pho is extremely popular as well, another noodle dish, this one called Hu Tieu Nam Vang, might be equally as popular, and widely available everywhere you look throughout Saigon. The noodle soup dish actually has an interesting history. Hu Tieu comes originally from kuy teav noodle soup, a simple pork based soup and pork broth. Nam Vang, on the other hand is a word that means Phnom Penh, the capital and largest city in Cambodia. So together, the dish is a combination of Cambodian and Chinese flavors, with a rich history in Vietnam.

There are many restaurants and street food stalls throughout Saigon selling Hu Tieu Nam Vang, ranging from nice indoor restaurants to simple street food stalls. When I was walking around and exploring, I found a popular spot, where there were plenty of people gathered around, and so I decided to try my first bowl of Vietnamese Hu Tieu Nam Vang. I ordered just the normal bowl, which came to my table, with a big handful of blanched rice noodles on the bottom, topped with a handful of assorted pig parts like intestines, liver and lungs, as well as a shrimp on the side. The best part about eating Vietnamese street food is all the herbs and vegetables that always come on your table. But before digging into the herbs, I first began by adding in some chili sauce, which was a little sweet and spicy, and then added a few scoops of fresh garlic to my bowl. I noticed that many Vietnamese were adding a ketchupy looking chili sauce to their bowl of Hu Tieu Nam Vang, but I decided to skip it and just go with the chili sauce and garlic.

The noodles were soft and slid down very easily and the pork was a simple stock made from pork bones, a tad bit sweet and salty to perfection. The basket of fresh vegetables included chrysanthemum greens, as well as sweet basil and a number of other herbs as well. I noticed some people were eating herbs after taking bites of noodles, and other people were just plucking herbs and mixing them into their bowl of noodles. Either works well.

In addition to my bowl of Hu Tieu Nam Vang, another popular thing to have at this Saigon street food stall is sugarcane juice. Since it was a hot and humid day in Saigon, the cold sugarcane juice was refreshing and hit the spot along with the hot bowl of noodles. Because this bowl of Hu Tieu Nam Vang was on the cheaper side, it wasn’t the best bowl I’ve had, mainly because there wasn’t all that much meat in it. But if you find a bowl that’s more expensive, it will definitely include more meat. Nevertheless, it was a very satisfying bowl of noodles for lunch, and I especially enjoyed the atmosphere on the street side.

Here are all the details of this street food stall: http://migrationology.com/2015/01/hu-tieu-nam-vang/

Address: It’s right on Cao Thang road and just past Nguyen Dinh Chieu intersection
Open hours: I’m not sure exactly their open hours, but I went for lunch at about 11:30 am and they were busy with customers. If you go at noon, they will be packed.
Prices: 22,000 VND for a bowl of Hu Tieu Nam Vang – a pretty good deal for a bowl of noodles in central Saigon – that could be one of the reasons for so many customers.

Music in this video from audionetwork.com

Don’t forget to get my exclusive food and travel updates: http://migrationology.com/food-news (free)

Thank you for watching this video, I hope you enjoyed it!