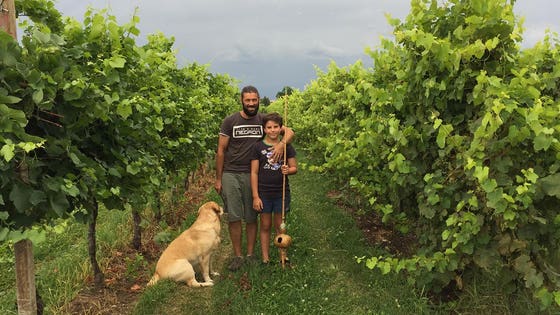 Prosecco producers are looking toward the future—and you may be surprised at their vision.

Prosecco, the Italian sparkling wine region responsible for the most toast-worthy bubbly, itself has a lot to toast about lately.

On a high note, this summer UNESCO recognized Prosecco’s uber-quality DOCG wine region as a world heritage site, calling out the hills around Conegliano and Valdobbiadine for their unique and historic terraced plots.

Also of note—albeit a less erudite advance—is the slow march toward approving an official Prosecco DOC rosé. It’s a move sure to be heralded as a double win that combines the world’s most popular sparkler and the trendiest color in wine. Though regional producers make rosé sparkling wines, currently they’re outside the regulations of the Prosecco denomination. After a years-long battle to protect the region’s wine of origin from imitators, officials are keen to keep up the good fight and grant the official category only if producers meet the DOC requirements. Recent reports hint at January 2021 as a potential launch date for pink Prosecco.

“The greatest benefits of an official Prosecco rosé designation are quality control—for the category, producers and consumers—and managing consumer expectations,” said Enore Ceola, CEO of Frexeinet Mionetto USA, a prominent producer of both DOC and DOCG wines. He added that while the world recognizes the quality of DOCG Prosecco—mainly because of its “heroic” vineyards on steeply pitched slopes, “there’s something special about the terroir diversification in the DOC appellation that doesn’t get enough attention.”

Amy Zavatto, author of “Prosecco Made Me Do It,” says the “success story of the Prosecco DOC cannot be overstated.”

“The region has done a really great job of introducing an entire generation of curious drinkers not only to the charms of Prosecco specifically, but to the notion that sparkling wine need not be saved for holidays and birthdays,” she said.

So, what should you drink? Basically, everything. Here’s why.

The No. 1 sparkling wine sold in the world by volume, Prosecco—a protected name since 2009—hails from northeast Italy’s Veneto region, situated in the plains between the Dolomite Mountains and the Adriatic Sea. It has deep roots in history and literature: the scholar and philosopher Pliny the Elder mentioned the wine in his Historia Naturalis, and the 18th-century Italian poet Aureliano Acanti wrote that he wanted to “sacrifice my mouth for that apple-aromatic Prosecco.”

Upgraded from Indicazione Geografica Tipica (IGT) status, the DOC encompasses nine provinces, mostly in the flatlands. All official Prosecco is made from the green-skinned Glera grape, but not all Proseccos are alike: Styles depend on method of production, official quality designation and location. Typically, the wines are labeled from two historic provinces: Prosecco DOC Treviso and Prosecco DOC Trieste.

As with any wine region of varied topography, Prosecco made in the DOC flatlands will be fuller and rounder than their more mineral-driven counterparts from higher elevations. Even within the plains, Ceola says, terroir differences contribute to stylistic differences. Here, too, more experimentation can be found, from wines made in the ancestral method or alternate vessels to more sustainable and biodynamic farming. Wines produced in the region but outside DOC regulations must be labeled Glera IGT.

Most DOC Prosecco is made by the Charmat method, in which secondary fermentation takes place under pressure in steel tanks. This isn’t a quality statement as much as efficiency: the tank method presents economies of scale. Some producers are reviving col fondo, the traditional style fermented on its lees in the bottle without disgorgement.

But, wherever it’s made, Prosecco must contain 85 percent of the Glera grape in the final blend; the remaining 15 percent may include local or international white varieties. Currently, all wines made under the official designations are vinified as white.

As such, Prosecco is fresh, crisp and fruit-driven, expressing stone and orchard fruits, citrus, and can deliver botanical aromas ranging from rose geranium and elderflower to more perfumed white florals and rosewater.

Prosecco comes in a variety of styles: spumante (sparkling) is the most bubbly with 1 to 3 atmospheres (atm) of pressure; frizzante (semi-sparkling) has 1 to 1.5 atm; and tranquillo (still), as it names suggests, is the most mellow with less than 1 atm.

The wines are made in four sweetness levels based on the European Union’s standard scale: Brut, Extra Dry, Dry and Demi-Sec. The minimum alcohol level for Prosecco is 10.5 to 11 percent.

Last year, the consortium received the Ecofriendly Prize from the Guida Vinibuoni d’Italia, and such a rising tide seems to have raised many boats.

“Landscape perception has really increased, as well as the emotions around it,” said DOC consortium president, Stefano Zanette.

Alberto Canella, export manager for Vigneti Le Monde, agrees, saying that in the past people regarded the DOC as “a place of high production and easy wines.”

“But, we are changing the vision of people living here and [changing] the perception with sustainable production methods,” he said.

Indeed, the DOC consortium is pressing for more chemical-free farming, has introduced a program for producers to improve agricultural best practices. Wineries such as Bottega in the Treviso province have implemented green mulch programs and natural pest control such as ladybugs and sexual-confusion traps. Bottega and Masottina, also in Treviso, have partnered with the local Oenology School to cultivate indigenous grapes for a sustainable future. At I Magredi, a large producer in the Friuli-Venezia Giulia foothills, solar panels produce one third of the electricity, a meteorological system prompts irrigation on an as-needed basis, and they plan to have a zero-carbon footprint by this year.

Maurizio Donadi, owner of the 22-acre Casa Belfi in Treviso, is one of the few Demeter-certified producers in the DOC, though he makes wines outside the regulations, in the col fondo style and some in amphora. And most unconventionally, he customized his vineyards with a variety of locally made “wind cellos”—wooden instruments that emit low frequency vibrations amongst the vines—a kind of musical therapy for grapes.

At the university where he studied enology, he attended a seminar on biodiversity and said, “It changed the way I thought about wine making.” In his area of stony well-drained soils, he says biodynamic viticulture, including the use of indigenous yeasts, gives “a more authentic expression of the terroir.”

Says Adriano dal Bianco, second-generation winemaker at Masottina, “Prosecco means the grape the region and the wine, and they’re not all the same.” Like Donadi, he says, the future is in defining the terroir.

“We try to guess what people want to experience [in our wines] and we always try to evolve,” he said. “We don’t’ really have a model, but we try to take the best of what we see.”

Prosecco DOC Producers to look for:

The 15 best experiences in Toronto
Amsterdam: Only Red Lights & Weed?
The 7 best hikes in Argentina cover every kind of adventure
Do I need a visa to visit Switzerland?
NFTs Debut With Interactive Gin, Whiskey, And Fine Wine Projects, Revolutionizing The Spirits Industry