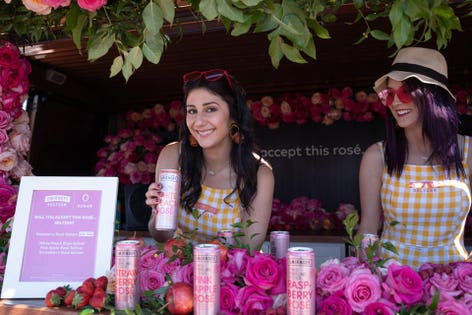 In the infamous words of disgraced Hollywood star Charlie Sheen, hard seltzer brands White Claw and Truly are winning the summer and fall. But in the first alcoholic seltzer competition in the country, these blockbuster brands didn’t win a thing.

Rather, at the Fizz Fight contest and festival held in Denver earlier this month, it was craft seltzer that placed first, second and third in all four categories. Forgotten Boardwalk Brewing, in Cherry Hill, New Jersey, took second in the judge’s picks of brewed hard seltzers with its brand-new J’aime Tangerine Rose with Hibiscus and White Tea.

“I was surprised!” emails Jaimie Queli, co-owner of Forgotten Boardwalk and J’aime’s namesake. “I didn’t think we would win, I just thought participating was a fun way for us to get in front of passionate seltzer drinkers. I never imagined that my head brewer would be crowned a master bubble-maker too!”

“That really reinforced to us there are national brands that are kicking a** right now,” says Fizz Fight co-creator Jake Browne, the former marijuana critic for The Denver Post. He said judges generally favored sweeter entries, though these two big brands aren’t sweet.

“The fact that light (seltzers) can stand up to some of these sweeter products was a huge win for them,” he said.

So what of Truly, brewed by Boston Beer, and White Claw, a sister product to Mike’s Hard Lemonade that stunned the nation by reportedly outselling Budweiser this summer?

Browne answers, “The one wrinkle was that everyone picked a flavor to enter and every flavor has its good days and bad.”

Happily for Browne, the 2200-person festival outsold expectations by 600 tickets, confirming that his home state of Colorado — which houses highly regarded brewer/cidermakers like Oskar Blues, Upslope and Call to Arms — made for a successful first site.

“People thought they were going to show up and ironically drink one of the two big seltzers but it turns out they really expanded their knowledge of the space,” he says. “This bro came up and hugged me. He said to me, ‘I thought I was going to have the worst time. When can we do this again?’ He’d had a few seltzers.”

That “bro” might be happy to learn that Browne is bringing Fizz Fest to Los Angeles in November, followed by warm-weather cities Miami and San Diego. After that, Browne may look to solid seltzer cities like Portland, Oregon, and Boston. He sees more activity on the coasts than in between, and he confirms that New Jersey tied with South Carolina to dominate the winner’s circle, with Forgotten Boardwalk and Crook and Maker placing second in both judges’ and people’s choice for brewed seltzer.

As for Queli, she laments not going to Denver herself and says she’ll “absolutely” attend future seltzer fests.

“It’s a category that isn’t going anywhere,” she writes. “Consumer interests are shifting to lighter and lower ABV beverages. I’m not sure if the seltzer category will turn into a crafty category or continue to be dominated by the big brands owned by mega companies. However, consumers across the board like local products and like knowing that buying local reduces overall carbon footprint, so that may help a smaller producer, like me, win some shelf space in the market.”

Fare city: how to get around in Dublin
What’s Next For The No-Alcohol Market?
Hotel Indigo Bali Seminyak Beach The Coolest Spa Hotel In Bali
Introducing Borneo
13 of the best things to do in Budapest