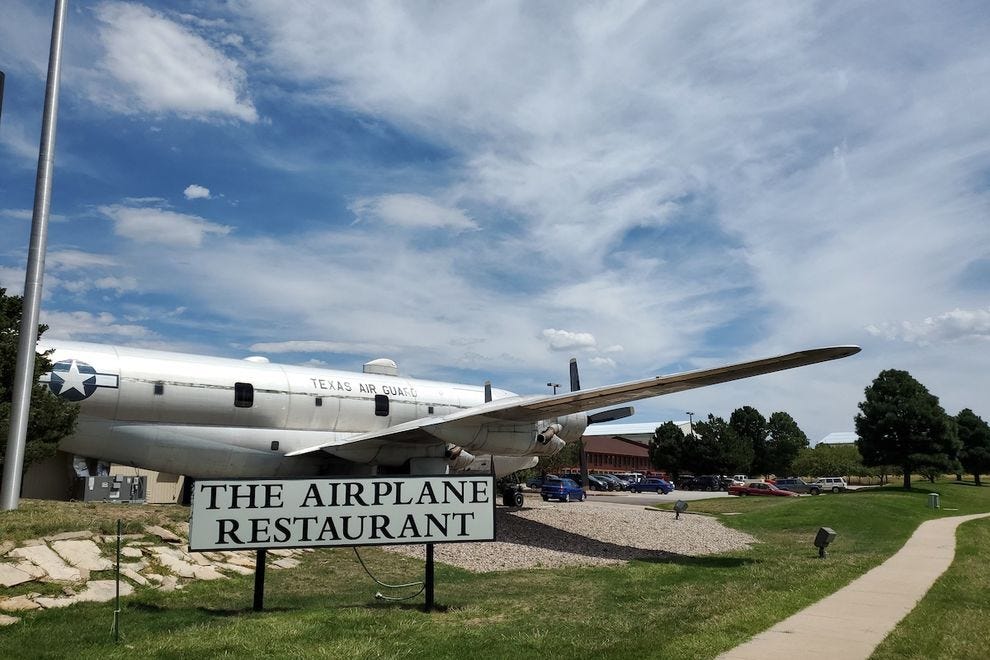 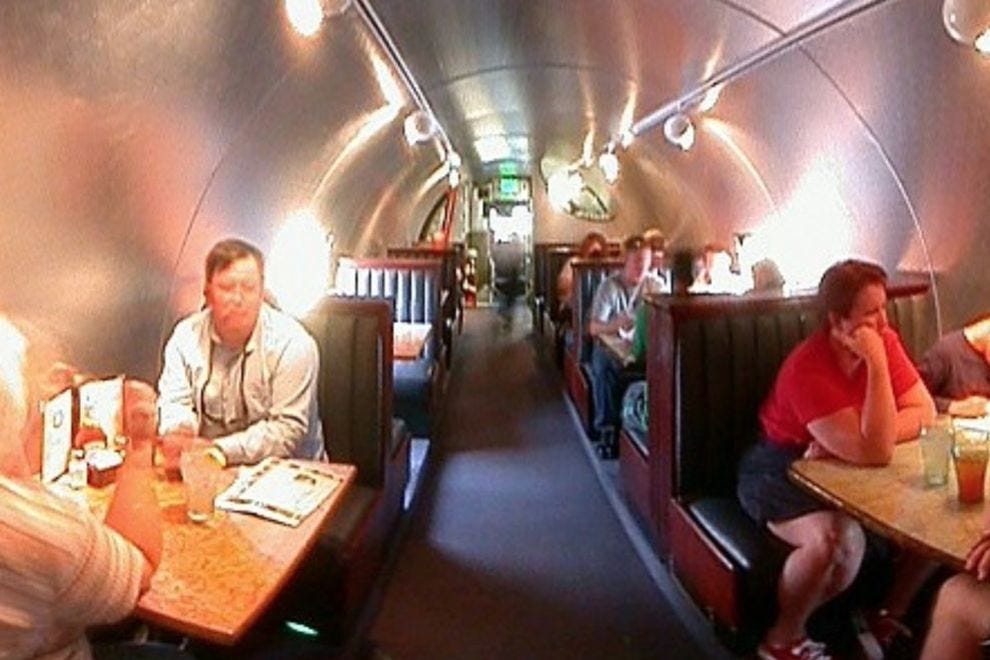 So many restaurants are taking over spaces that were once used for different purposes and incorporating those origins into their décor. By paying tribute to their history, they create a richer dining experience, and something to talk about over your meal.

Here are 10 places that have been transformed into restaurants where the food stands on its own but, like a diamond ring, is enhanced by a truly original setting.

Oh, if the walls could talk. 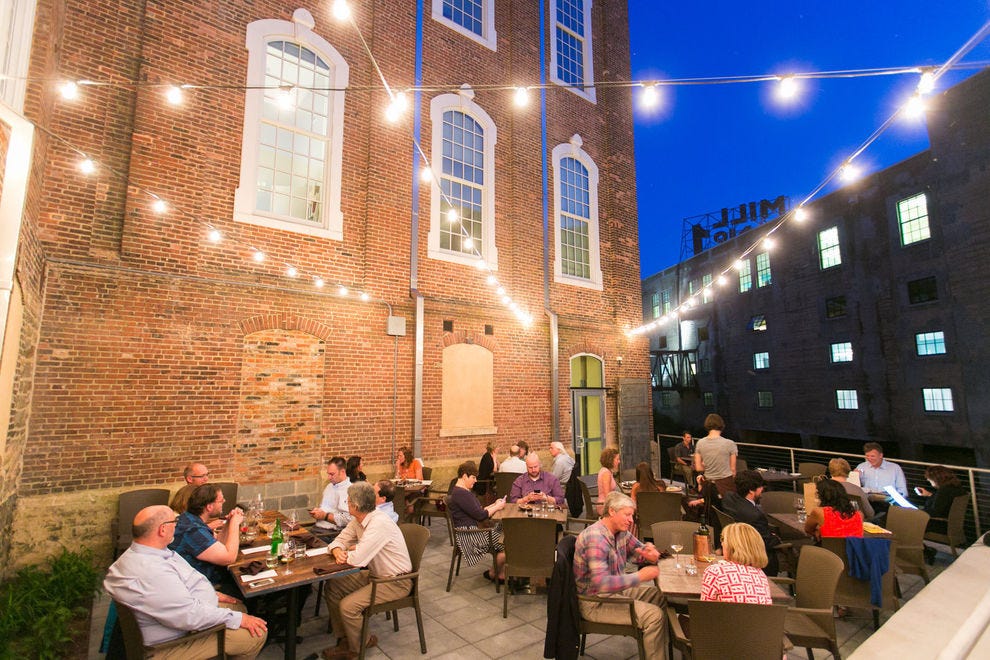 In 1847, Mill No. 1 was home to The Mount Vernon Company, the world’s largest producer of cotton duck fabric. Today, its old boiler room is home to Cosima, one of Baltimore’s best new restaurants, where you’ll be treated like family and will feel like your mama was lovingly cooking for you – well, if your mama was beloved Executive Chef Donna Crivello (of Donna’s Coffee Bar and Restaurant fame).

Totally modern with a nod to both its culinary heritage and location, Cosima offers exquisite Sicilian and Southern Italian cuisine in a warm and inviting setting. Dine on the outdoor patio, which offers incredible views of the historic Jones Falls waterway and introduces a part of the city many Baltimoreans have never seen, adding a new chapter to its history. 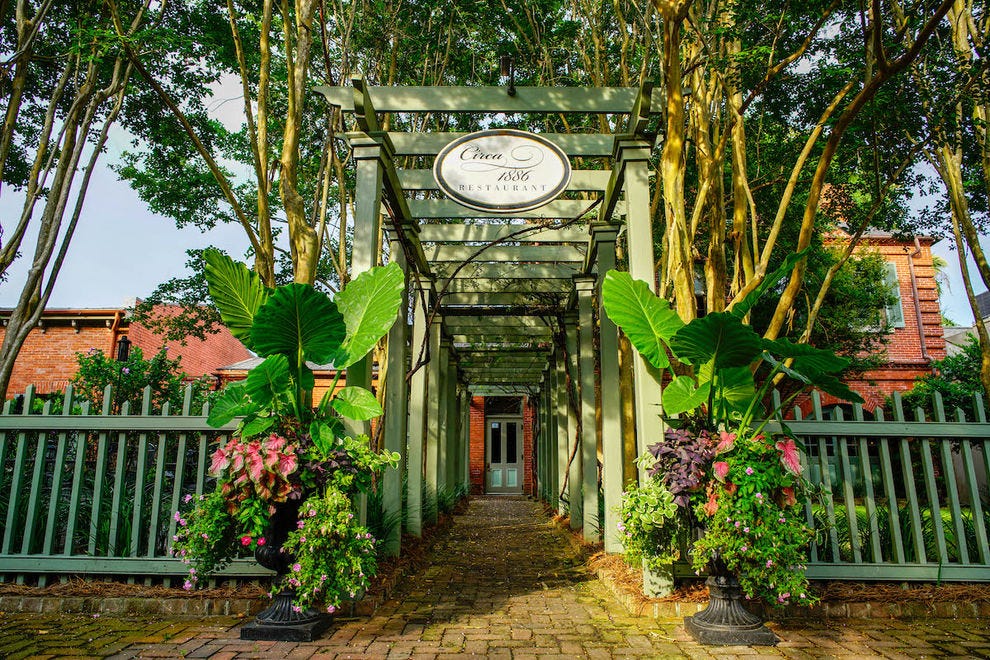 A Charleston favorite, this popular restaurant is located in the original carriage house of the historic Wentworth Mansion, one of the city’s most award-winning and hospitable five-star hotels. Designed in the Second Empire style by architect Daniel D. Waynes, the grand mansion was built from 1865 to 1887, and was the family home of a wealthy businessman, his wife and 13 children.

Circa 1886, long considered one of Charleston’s finest restaurants, retains the spirit of the carriage house with stable doors and original heart-of-pine floors. Designed to mimic the carriage openings – which makes sense because the food is so good, you’ll eat like a horse – cozy booths with candlelit tables are tucked into arched openings.

Breakfast at Circa 1886 is exclusively for hotel guests, but everyone is welcome for dinner, when Executive Chef Marc Collins elevates Lowcountry cuisine to new heights.

This Boeing KC-97 tanker-turned-restaurant totally redefines the idea of airplane food, with an extensive menu offering everything from salads and sandwiches to steak and pasta. Built in 1953, the magnificent airplane refueled aircraft throughout the world. In 2002, it began refueling hungry diners.

Spread out – only 42 guests can actually eat aboard the 275-seat restaurant – and let your imagination take flight as you explore aviation history through hundreds of photos, memorabilia and rare artifacts. Warning: Your experience on this plane may set a new standard that your next flight probably won’t be able to meet. 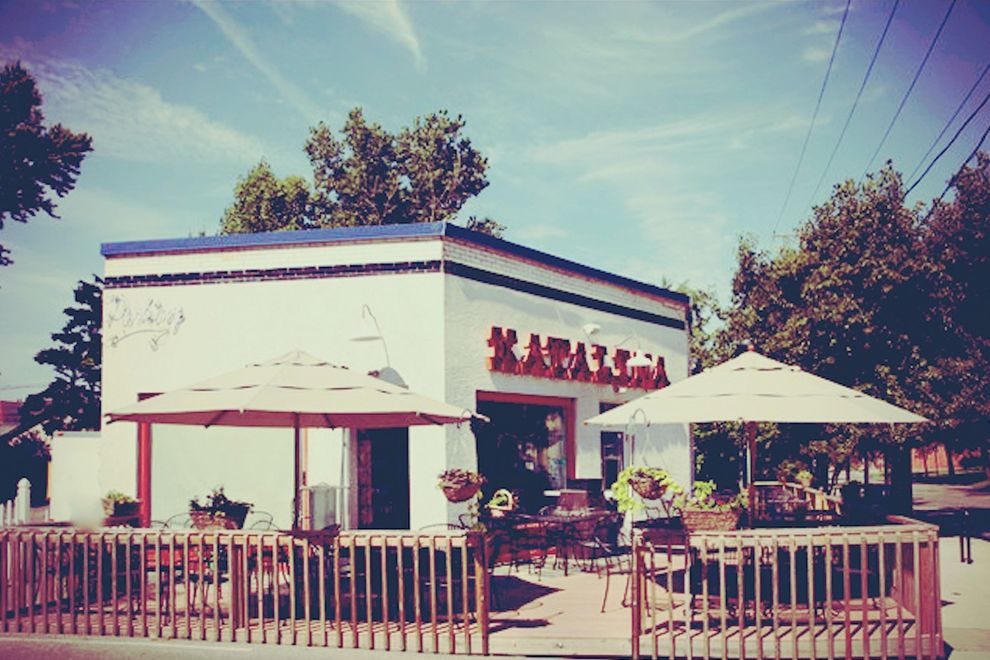 Katalina’s used to be a gas station — Photo courtesy of Katalina’s, The Little Cafe with Lots of Local Goodness

Katalina’s, The Little Cafe with Lots of Local Goodness™, is housed in a 100-year-old gas station – the oldest one in Columbus – and people are happily continuing the tradition of waiting in line to get filled up.

The neon around the building and on the “parking” sign are original but, instead of gas, Katalina’s is now pumping out some of the city’s best breakfast, brunch and lunch dishes, including their signature pancake balls. More than a million of them have been consumed to date, along with many gallons of locally-made Milligan’s bourbon barrel aged maple syrup. 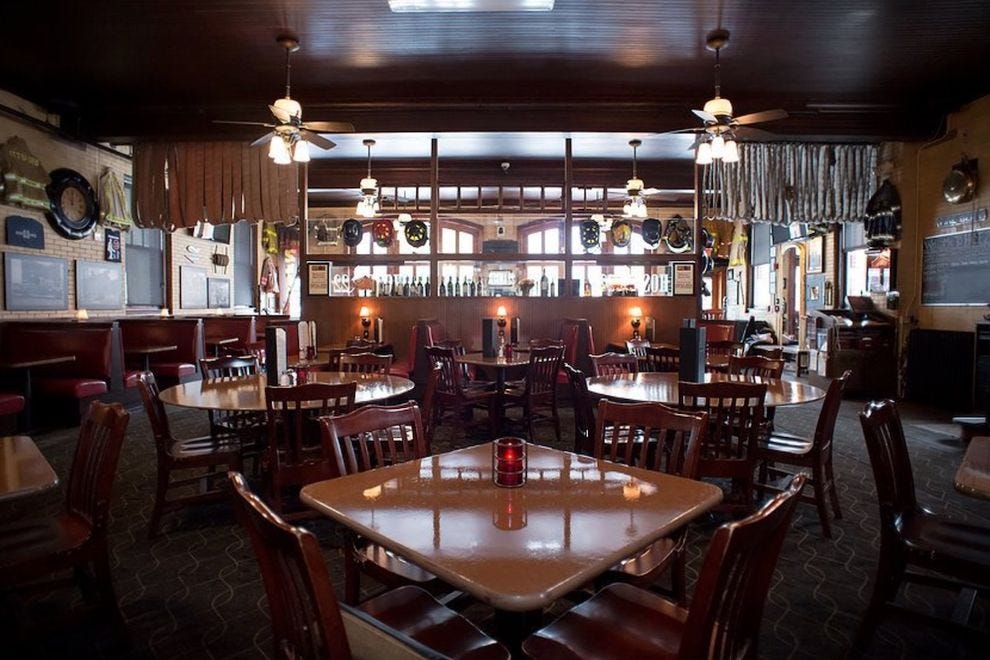 The Hose 22 firehouse has been a Stutson Street fixture since 1916. It moved to a more modern facility in 1962 and stood empty for 47 years due to, ironically, a fire. In 2009, Rochester’s 175th anniversary, Hose 22 Firehouse Grill opened, restoring and honoring an important piece of the city’s history.

Using old photos, the restaurant was able to meticulously replicate the firehouse down to its fire poles and recognizable wrought iron balcony. The community generously donated historical photos and memorabilia in tribute to the brave firefighters who protected and served them.

Today, Hose 22 is serving them everything from pizza and burgers to steak and seafood. There’s no cause for alarm if the ribs – smoked fresh daily – run out because there are so many excellent back-up options to the rescue. 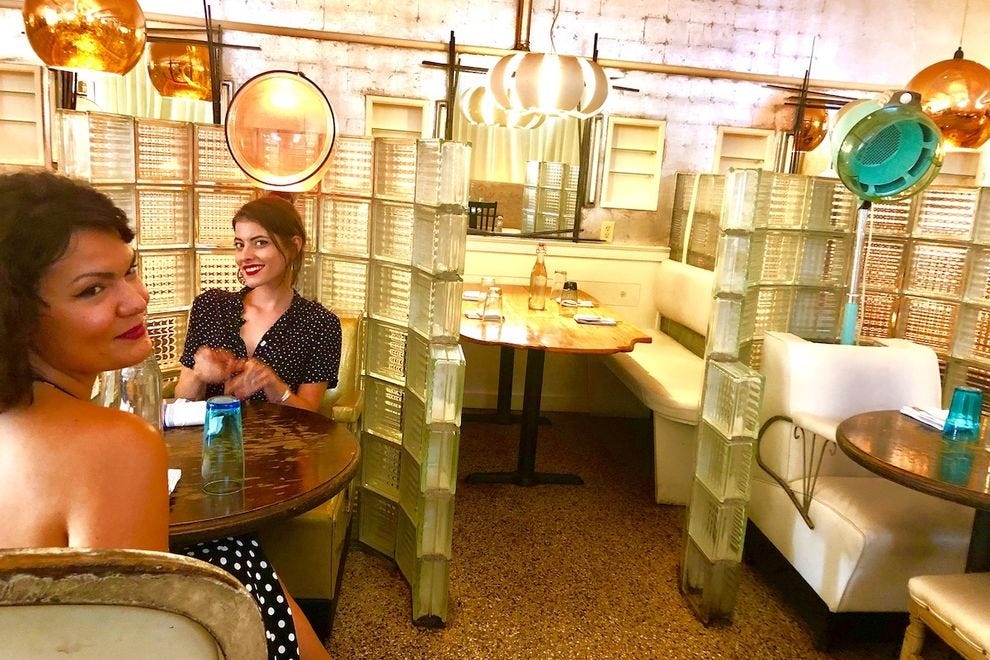 This kitschy Memphis restaurant was once – you guessed it – a beauty shop. And not just any beauty shop but the one where Priscilla Presley used to get her beehive ‘do done. Although Elvis may have left the building, many of the old-school salon details still take center stage here: sinks for washing hair adorn the bar, daily specials are written on the mirror and you can eat under a Belvedere dryer.

In case you think this is merely a fun themed restaurant, one bite of the watermelon and wings or heirloom tomato and challah toast will set you straight. This is sophisticated food with a Southern accent, bursting with flavor and originality, made by people who care deeply about their craft. Your taste buds will understand they’ve had a brush with greatness. 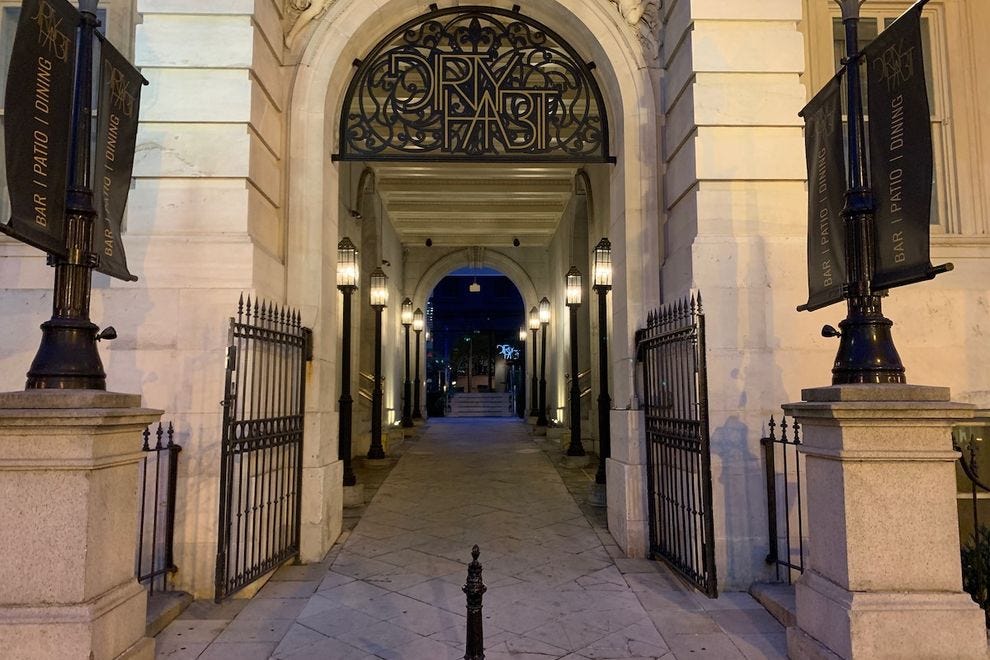 Dirty Habit, the Kimpton Hotel Monaco’s buzzing – and buzzworthy – restaurant, is located in the former mail-sorting pavilion of Washington, D.C.’s original General Post Office, which is where the Pony Express came to collect their packages. Constructed in 1839, it was the city’s first all-marble building patterned after the Roman Temple of Jupiter.

Guests enter the restaurant through the archway where the mail delivery team members would ride their horses to pick up and drop off mail. More than a century later, Executive Chef Kyoo Eom’s innovative seasonal menu and Beverage Manager Drew Hairston’s exciting bar program deliver an exceptional dining experience. 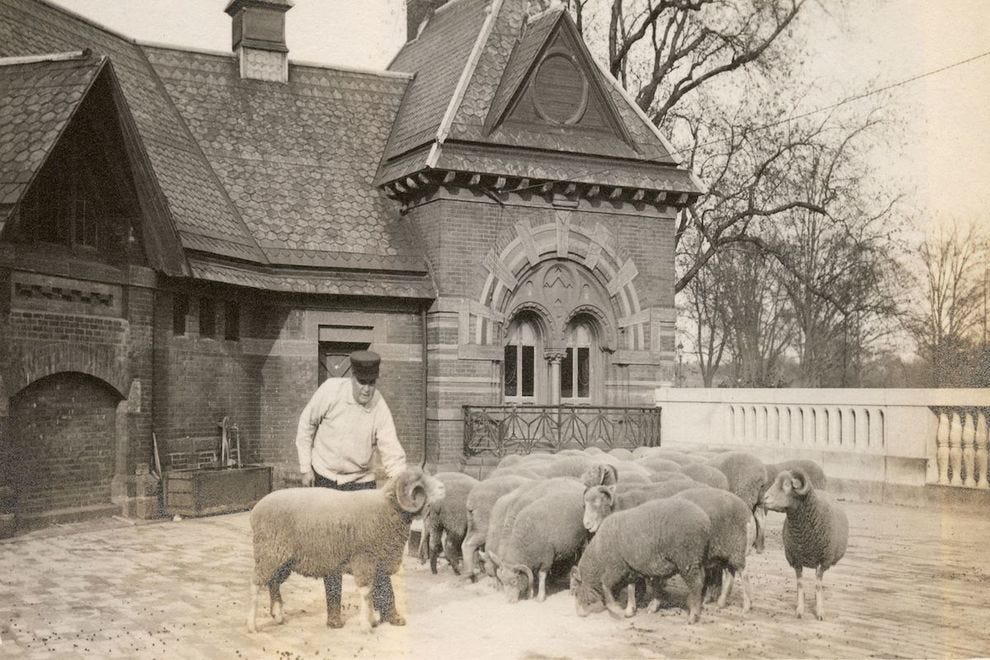 New York’s iconic restaurant started out in 1870 as a Gothic Revival sheephold housing 200 Southdown sheep. In 1934, the animals were banished to Prospect Park in Brooklyn, and the space became a much-heralded restaurant as part of a Robert Moses park renovation.

This landmark continues to make history as a New York staple, sitting in its place of honor in Central Park’s Sheep Meadow. Tavern on the Green has been featured in classic movies like “Wall Street” and “Beaches,” and is such an important part of so many people’s memories that they’re actually compiling all of these tales in what will ultimately become a treasured book. Get in and create a chapter of your own. 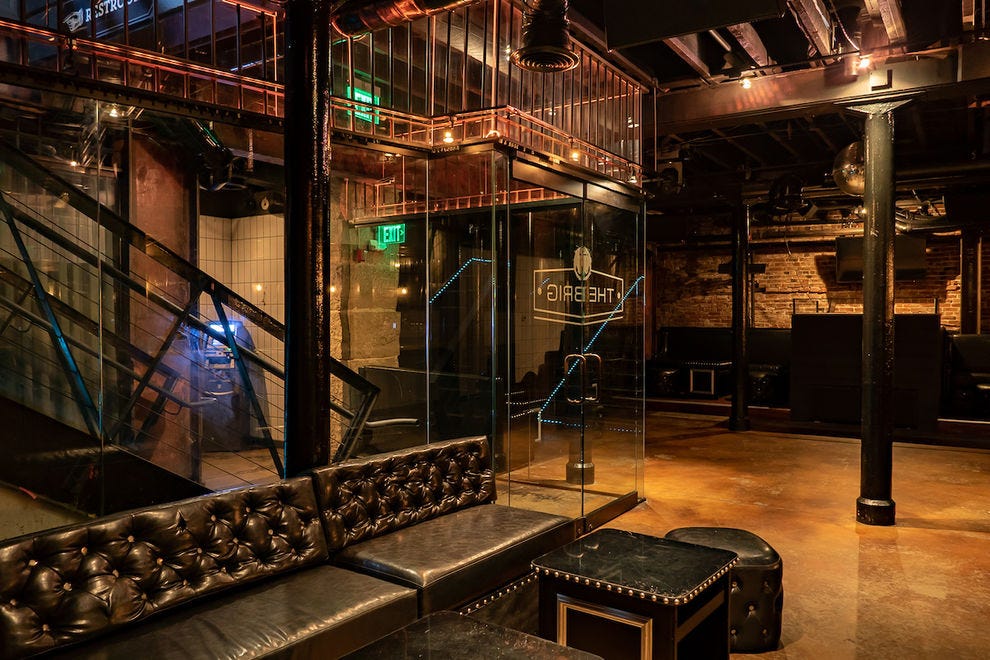 During its storied history, “San Diego’s Grand Old Lady” has been a city hall, a bank, a public library and a jailhouse. It’s now a welcome addition to the downtown restaurant scene, with its Victorian façade restored to closely resemble its original appearance. The first building in San Diego to be constructed entirely from local materials, the restaurant has kept many of the late 19th century elements intact.

In fact, downstairs, in Sign of the Whale’s basement, The Brig pays homage to the space’s former use as a jail, with beams and high ceilings all restored from the original building. What used to be cells and bars have been transformed into a much more welcoming bar and underground den that’s only open after dark. You’ll never have to worry about solitary confinement at this popular nightlife destination. 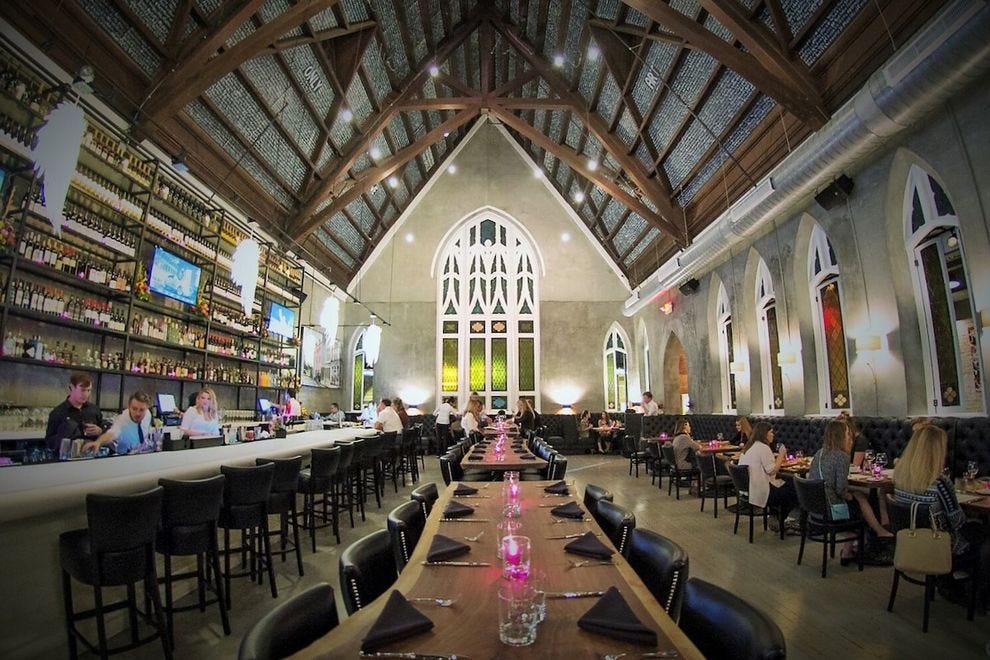 5Church used to be a church — Photo courtesy of Explore Charleston

Somehow, it just seems right that 5Church would open in the Holy City. Located, of course, in a historic church – the old Church of the Redeemer and Harriet Pickney Home for Seamen – the restaurant features stunning stained glass windows, high ceilings and food that may be the answer to your prayers.

Its eclectic menu – sushi tots, Japanese fried chicken, peanut butter and jelly cinnamon rolls – will have you giving thanks and praising the chefs.