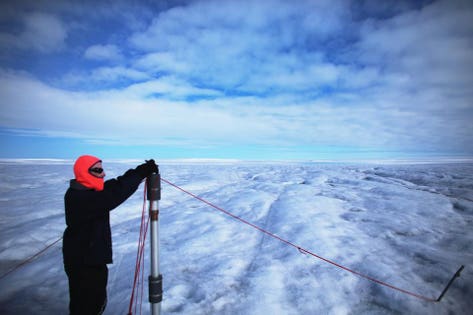 Sea levels are rising even faster than scientists had predicted and by the end of the century, the oceans could be more than a metre higher than today if global CO2 emissions are not controlled, a new expert analysis has concluded.

Earlier this year, the Intergovernmental Panel on Climate Change, a body comprising the world’s leading climate scientists, published a report on how climate change will affect land. It highlighted how climate change is affecting the production of food, at the same time as agriculture and deforestation are also major contributors to climate change.

Food production will be affected by problems ranging from desertification and more frequent and severe droughts to floods, landslides and heatwaves, it said.

Now the IPCC has produced a follow-up looking at the impact on the oceans and the cryosphere – the bits of the earth that are covered in ice. This report is no more cheerful than the last one.

It says that our oceans, ice sheets and glaciers are absorbing the bulk of rising temperatures and that the impacts are already evident, from the top of the highest mountain to the bottom of the oceans – and they are affecting everyone. Climate change makes the oceans warmer and more acidic, while reducing the oxygen content, with knock-on effects for everything that lives in it.

Warming temperatures are already shrinking Arctic sea ice and the loss of ice from Greenland and the Antarctic is contributing seven times as much to sea level rise as it was just 20 years ago. As a result, sea levels are rising at unprecedented rates and the world could see a 2-metre rise in sea levels by the end of the century in the most extreme scenario.

Melting permafrost in the Arctic and Siberia could release huge amounts of locked-up CO2 and methane, further exacerbating the warming of the planet.

Meanwhile, glaciers could shrink by 20% this century, with some regions such as Central Europe seeing a reduction of more than 80% and Arctic permafrost faces widespread disappearance. It sounds like a geography lesson. But all of this adds up to serious impacts for all of us. The glaciers in the Himalayas provide water for almost 2 billion people and a third of it is predicted to have melted by the time today’s children are adults.

“The open sea, the Arctic, the Antarctic and the high mountains may seem far away to many people,” said IPCC chair Hoesung Lee. “But we depend on them and are influenced by them directly and indirectly in many ways – for weather and climate, for food and water, for energy, trade, transport, recreation and tourism, for health and wellbeing, for culture and identity.”

Some island nations will become uninhabitable by the end of the century – the highest point in the Maldives, for example, is about eight feet above sea level, and the average height above sea level is about four feet. It’s not just islands that are at risk. More than a quarter of the world’s population live within 100km of the coast, and less than 100 metres above sea level, including 17 cities with populations of five million or more. Examples of how this will affect people include the Mekong Delta in South East Asia, where more ferocious storms and higher sea levels will make the water more saline and have a potentially devastating effect on harvests and food prices.

Residents of coastal cities and towns could see what were previously once-in-a-century events, such as massive floods, storm surges and extreme rainfall, becoming annual occurrences by 2050. As well as causing severe damage to property and local economies, these events could lead to a wave of climate change-induced migration, increasing already febrile social tensions.

The fish stocks that we depend on for our food are going to fall by up to a quarter due to the oceans becoming warmer and more acidic, with marine mammals also suffering a 15% decline and “almost all coral reefs” set to degrade.

And if you live in the mountains, home to a tenth of the world’s population, there will be more landslides as glaciers recede, and less water, which will hit everything from food production to hydro-electric power production and tourism.

“The findings of this report are a wake-up call for everyone – not just for those who live near the ocean,” said filmmaker and executive director of the Oceanic Preservation Society Louie Psihoyos. “Our entire global society is reliant on the ocean and ice systems that regulate our planet. We can no longer afford business as usual, and it is going to require the participation of each of us. These signals are too strong for us to ignore any longer – now is the time for bold, urgent climate action to avoid even more catastrophic impacts.”

However, there is some hope in the report. We can limit many of the effects on the oceans if we act now. “If we reduce emissions sharply, consequences for people and their livelihoods will still be challenging, but potentially more manageable for those who are most vulnerable,” says Lee. “We increase our ability to build resilience and there will be more benefits for sustainable development.”

The report points out the benefits of ambitious and effective adaptation for sustainable development and, conversely, the escalating costs and risks of delayed action. “Various adaptation approaches are already being implemented, often in response to flooding events, and the report highlights the diversity of options available for each context to develop integrated responses anticipating the full scale of future sea level rise,” said Valérie Masson-Delmotte, one of the authors.

Strongly reducing greenhouse gas emissions, protecting and restoring ecosystems, and carefully managing the use of natural resources would make it possible to preserve the ocean and cryosphere as a source of opportunities that support adaptation to future changes, limit risks to livelihoods and offer multiple additional societal benefits, the report adds, but it is not going to be easy.

“We will only be able to keep global warming to well below 2°C above pre-industrial levels if we effect unprecedented transitions in all aspects of society, including energy, land and ecosystems, urban and infrastructure as well as industry. The ambitious climate policies and emissions reductions required to deliver the Paris Agreement will also protect the ocean and cryosphere – and ultimately sustain all life on Earth,” said Debra Roberts, another co-author.

“The more decisively and the earlier we act, the more able we will be to address unavoidable changes, manage risks, improve our lives and achieve sustainability for ecosystems and people around the world – today and in the future,” Roberts said.