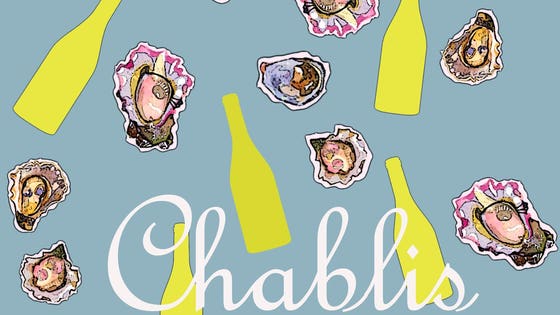 Chablis and oysters are the ultimate merroir and terroir pairing

If you pay attention to seasonal foods and you’re an oyster lover, you know that we’ve entered the beginning of the prime consumption season—September through December. Though their recommended eating season may be limited, oysters are one of the most democratic of seafood, with numerous regions able to lay claim to deliciousness based on their “merroir”—that combination of geography, salinity, water temperature, seabed and cultivation methods that defines flavor.

In the spirit of what grows together goes together, France’s temperate coasts—notably around Cap Ferret, Bordeaux and the far western end of the 630-mile-long Loire River—are prime territory. There, local oysters go hand in hand with regional wines, matching wine with brine.

Many sommeliers have a classic approach, reaching for the highly quaffable and amiable Muscadet from Loire Valley, minerally Sauvignon Blanc from Bordeaux (or landlocked Sancerre), or Picpoul de Pinet, some of whose vineyards border oyster beds in the southern Rhone.

In a series dedicated to oysters and wine—one for each “er” month— I’ll ask the pros for their tips on what to drink with the mighty mollusks. Round one: Chablis.

It’s in the dirt

“I think that the best pairing is any white wine grown on Kimmeridgian limestone. That would include Sancerre, Chablis, and Champagne from the Côte des Bar region,” says Jon-David Headrick, whose eponymous portfolio is represented by European Cellars, based in Charlotte, N.C. “These wines often have a salty, high-mineral component that I think pairs really well with east coast oysters, which [also] tend to have a high brine component.”

“To me, there’s such a parallel between Chablis and the shellfish because of the soil there,” he says, referring to Kimmeridgian, known for its chalky geology, chock-full of fossilized oyster shells. “Of all the food products, oysters show their provenance and their personality most clearly—just like terroir-based wine like Chablis.”

“Steely, dry, high-acid white wines are the typical oyster pairing, and Chablis is one of the most excellent for them,” he said. “[The] Kimmeridgian soil gives Chablis its freshness, minerality and marine notes. Thus, there is an eternal connection between Chablis and oysters.”

He advises chasing down oysters with racier versions of the wine, saying, “the less oak that’s involved, the better off you’ll be. Rather than having a fully fermented and vintage Chablis, go for a fresh Chablis, and the oysters are sure to become your favorite food in a few days.”

The brine is just fine

While living in France, Carrie Strong, wine director at Manhattan’s Casa Lever, recalled pouring Chablis directly into the oyster shell and “slurping it all up together.” For saltier oysters like those from Cap Ferret, she says a clean wine with a good mineral structure such as Bernard Defaix “Cote de Lechet” will help oysters “ride like a surfboard into your very deserving, beach-bum mouth.”

But, just as not all oysters are the same, neither are all Chablis matches.

“The fatter and fruitier the oyster, the same you’ll go up in flavor with wine. If you have a fruitier, meatier oyster, an older Chablis would give it a good foundation on the palate,” he says. “A briny, cool–climate oyster requires some aggression in acidity, and when it’s super briny you’ll want [Chablis] with more citrus qualities.”

Richard Vellante, executive vice president of culinary at Boston’s Legal Sea Foods, knows something about that. He oversees some 35 restaurants in New England and the Mid-Atlantic states, with a menu leaning heavily towards east coast oysters sourced from Canada to New Jersey, with the bulk of them coming from Cape Cod and Maine.

“East coast oysters have a salinity to them and a stronger ocean flavor and, much like wine, really do pick up the area where they’re grown,” he says. Flavor profiles can include a sweet finish or vegetal undertones or have strong minerality like those from Canada or Maine. For that reason, Block, the wine director, likes to keep a variety of Chablis styles on hand.

Block says for some preparations, he leans towards Chablis village wines that have more flesh, intensity of body and are a bit rounder in texture. With naked oysters, he calls on two Chablis styles, depending on flavor: premier or grand cru with richer textured, creamier oysters, and the rounder village-level with oysters that express a briny personality or vegetal aspect.

The best way to experience the glories of Chablis and oysters is to have a variety of both east and west and Chablis “focused on growing, terroir and classic winemaking,” said Charlene Santiago, an alum of the former John Dory Oyster Bar and now owner of Canal Street Oysters.

She said the experience isn’t complete without considering “oyster liquor”—the last bit of juice that runs out of the mollusk that makes the finish, and which can express lemon, creaminess, metallic, melon or cucumber.

In Dallas, Whit Meyers, wine director at Park House Dallas, specifically calls out 2018 Chablis as “maybe the best vintage [of] this century” with their “tension and electricity.” He praises their crossover ability.

“The minerality from the chalk is a strong flavor bridge to an east coast oyster such as Delaware Bay, and the width plays well and stands up to a Kumamoto.”

At the Houston Galleria outpost of the venerable Pappas Bros. Steakhouse, “oysters are a common sight on tables for early courses” says sommelier Peter Plaehn. He recommends Chablis for its bright acidity, and with sweeter west coast oysters, he says “I love Oregon Chardonnay for them.”

Picking through the options may seem like a shell game, but Coll advises, “Keep it simple, not overly executed, and create a nice progression with the rest of the meal.”

The best hotels near Oxford Street in London
Two companies have luxury trains called the ‘Orient Express.’ Here are the differences
Holiday Gift Guide 2022: The Best Kitchen Gifts For Food Lovers
Get ready for the FOOD TRIP of a Lifetime!
#Shorts Spirits Demand to Speak With Assistant Manager﻿ | Kindred Spirits | Travel Channel