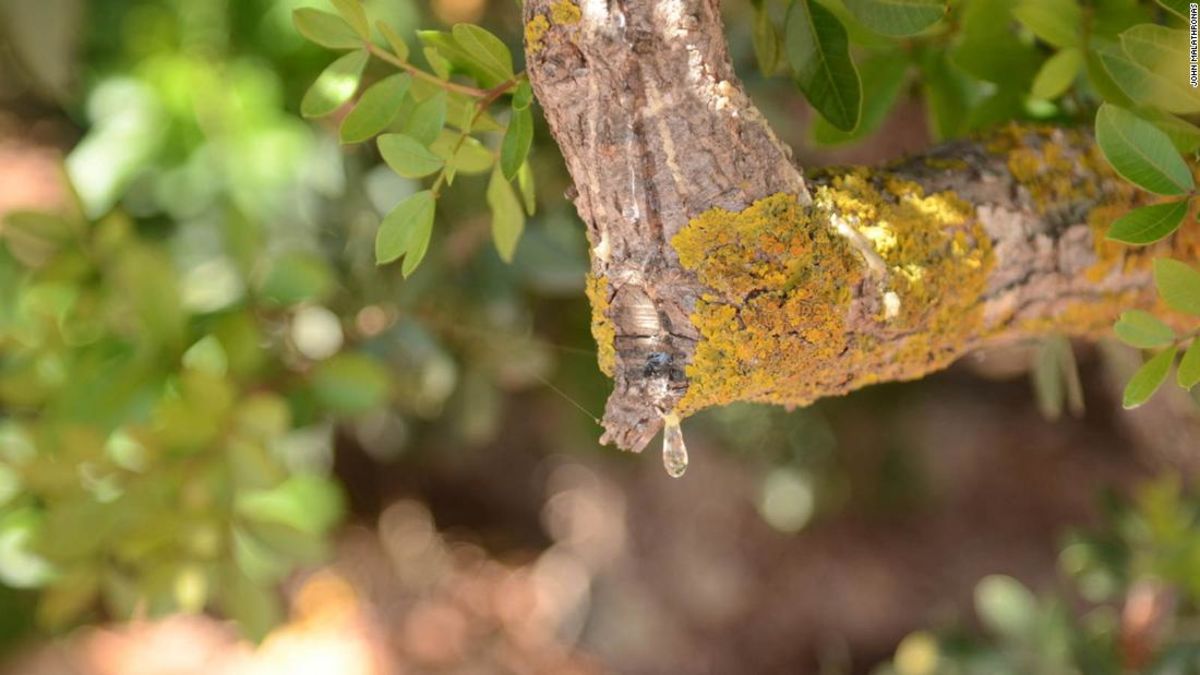 (CNN) — Known as the “painted village,” Pyrgi is undoubtedly one of the most photogenic places in the world.

Located on Chios, the fifth largest of the Greek islands, it’s made up of houses adorned with geometric engravings that use a technique called sgraffito.

The process, most likely imported by the Genoese who ruled in the Middle Ages, begins with three coatings of white paint, black volcanic sand from the nearby beach of Mavra Volia and a lime finish.

Builders then scratch through the layers and produce complex patterns.

While this labor-intensive process is very expensive, it’s a matter of pride for villagers.

Besides, money is no object. Pyrgi has proved to be one of the wealthiest villages in the Mediterranean over the ages.

For centuries, the local economy has been strengthened by the cultivation of lentisc trees that produce the aromatic “mastiha” resin.

The history of mastiha, often translated as “mastic,” is beautifully illustrated in a museum situated outside Pyrgi, which offers striking views of the surrounding hills covered in Spanish broom and those mysterious lentisc trees.

The natural resin is obtained through the cultivation of lentisc trees that produce “mastiha”.

The English word “masticate” comes from the Latin adaptation of the Greek word “to chew,” which is mastichein.

Back when there was no dental hygiene, the wealthy chewed mastiha to freshen their mouths and/or protect themselves against plaque.

As a result, it was very highly prized.

Nikos Zervoudis, a farmer from Pyrgi, demonstrates the back-breaking cultivation process in a copse of lentisc trees outside the museum.

“During the winter, the tree needs fertilizing and pruning to a round shape so that the resin can be collected properly,” he tells CNN Travel.

“But in the spring it needs a special kind of cleaning.”

“First we prepare the ‘table’ by weeding a round area below the tree and sweeping it clean of stones and pebbles. We then spread limestone to create a flat surface where the resin will fall and congeal without dissolving.

“Afterward we make shallow incisions starting from the bottom and going to the top; the bottom produces thicker droplets and the top finer ones. About three to four weeks after the incisions are made, we collect the drops from the table and pick those remaining on the trunk.

“If it rains just once during this time the resin will dissolve and the whole harvest will be lost. In the fall, we clean the crop by sifting it, washing it and picking out the impurities.”

The island of Chios — the only place in the world mastic can be produced.

What’s particularly mind-boggling is the variety of lentisc tree that produces this particular resin (Pistacia Lentiscus var Chia) only grows around 24 villages in southern Chios, including Pyrgi, collectively known as “Mastihohoria” or ‘”mastiha villages.”

There have been attempts to graft such trees in Italy, across the sea in Turkey and even in northern Chios, but all have proved futile.

According to local legend, this is because of St. Isidore, a Christian sailor in the Imperial Roman fleet who was martyred on Chios in the third century, during the reign of Emperor Decius, and dragged by horses on the rough terrain of Chios.

When the lentisc trees saw his suffering, they are said to have cried tears of mastiha.

However, modern agronomists say it’s due to the combination of the volcanic soil of southern Chios, an exceedingly dry micro-climate, and eugenics practiced over generations whereby only the best-yielding trees were propagated.

The Genoese streamlined the cultivation and trade of mastiha while they ruled Chios from 1261, until the Ottoman Turks captured the island in 1566.

In order to gain control and prevent smuggling, the Genoese built a network of fortified villages from scratch — the Mastihohoria — and forcibly resettled islanders from their farmsteads.

All of these villages were constructed with the same structure in order to deter pirates — a surrounding wall, a gated entrance and a web of narrow streets leading to a central defensive tower.

It wasn’t until 1920 that a villager from Pyrgi dared build a house outside these walls, and was subsequently mocked for “going into exile”.

The fortifications of the village of Olympi remain intact, with a few external windows and doors dating from the early 20th century. Its central tower, which lost its upper floors to the construction of nearby houses, is now split between two cafés.

The village of Mesta is the most charming of all, with its profusion of ivy, jasmine and bougainvillea creepers ornamenting a medieval maze of passageways, porticos and arcades.

Mastiha liqueur is one of the many products made from the resin of the Mastiha tree.

The trade of mastiha took a big knock after 1900, when Thomas Adams mass produced chewing gum in the United States under the name Chiclets from the resin of the Mexican sapodilla tree and marketed it worldwide.

This coincided with war and instability on Chios that saw it incorporated in the Greek state, and World War I and confrontation with Turkey followed soon after.

Today there’s a renewed interest in mastiha thanks to its perceived health benefits.

“The EU has recognized mastiha as a traditional herbal medicine for digestive problems and the cultivation know-how has been declared a UNESCO intangible cultural monument of humanity” says Ilias Smyrnioudis, research manager for the Mastiha Owners Association in the official mastiha shop in Chios Town.

“We export 90% of our annual production to 45 countries. You can even find mastiha in American health food store GNC as a food supplement.

“Most exports go to the Middle East, which never lost its taste for mastiha. Muslims use it during Ramadan as a spice in food and also as a house perfume.”

In Greece, it’s been used as a gum, a digestive liqueur and for sweet treat “submarine,” a soft mastiha fondant served around a spoon in ice cold water.

Iakovos Konstantas, an award-winning mixologist from the Oz cocktail bar in Chios Town, wants to change all that through his “mastiha project.”

“This is an initiative by the Oz team to make mastiha known in the bartending scene by entering various competitions using mastiha cocktails,” he says. “I love mastiha as a spice. Its flavor is earthy, bitter, grassy, wooden.”

Konstantas has created a cocktail named Black Pebbles that’s made from mastiha liqueur, sesame oil syrup, fresh ginger, cucumber with a touch of pickle juice and served in a glass with two round ice cubes and roasted sesame seeds on the rim.

It’s inspired by the Mavra Volia beach, where Pyrgi builders pick up the black sand for their sgraffito designs, and it’s gratifyingly refreshing.

“When I was in New York city recently, I went to the famous Angel’s Share bar in the East Village,” he adds. “And there, 5,000 miles away from home, I spotted a bottle of mastiha liqueur.”

“Give it five years and mastiha will be used all over the world!”

How to get there

Chios is a 35-minute flight from Athens via Olympic Air.

Visitors can take a bus from Chios Town to the Mastihohoria or rent a car.

20 stunning European hot springs to visit in 2023
Don’t Let Lost Luggage Ruin Your Trip!
Not a fan of cruising? The hack that could change your mind
What to eat and drink in Germany: from curb-side Currywurst to Black Forest cake
Winter weather disrupts hundreds of flights across Texas