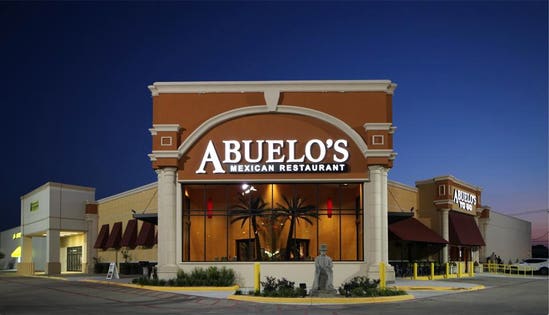 Rated one of the top 50 emerging restaurant chains in the U.S. by a leading industry publication, Abuelo’s Mexican Restaurant is taking a breather before it expands again. It has been ranked the number one rated Tex/Mex chain by Consumer Reports and has introduced healthy Mexican food by adding antibiotic-free and vegetarian-fed chicken to its menu.

It’s expanded to 35 units traversing 13 states including Texas, Florida, and several Southern states. But unlike most restaurant chains that expand through franchising, so it doesn’t have to raise capital, its restaurants are 100% company-owned, with none franchised.

Four business partners launched it in 1989 in Amarillo, Texas and three of them are still involved: James Young is chairman, Dirk Rambo is executive VP of Operations and Dickie Overstreet is VP of Properties. The fourth founder, Chuck Anderson, died several years ago.

In 2018, Abuelo’s added two locations in the Tulsa area, but in 2019 it has no plans to expand. Instead it’s focusing on remodeling existing units with the intention of boosting revenue.

It’s also trying to offer dishes that go beyond the usual tacos and nachos. For example, some of its most popular dishes are: beef tenderloin medallions wrapped in bacon accompanied by jumbo shrimp; the grande which includes three enchilladas, one beef, one cheese and one sour-cream chicken; and Australia sea bass served with a sherry sauce.

Several Yelp respondents liked the large portions and commented on bringing home leftovers for lunch the next day. The customers who complained on Yelp all got personalized reaction and follow-up from managers located at one Abuelo’s in Dallas to get to the root of any complaint.

Here’s what Dallas, Texas-based Brian Bell, VP marketing and merchandising, who has been with the restaurant chain for 20 years in different capacities, said about Abuelo’s growth.

There are a slew of sit-down Tex-Mex restaurant chains out there. What makes Abuelo’s distinctive?

Bell: You find many places that offer strictly a Tex Mex menu or coastal cuisine, but we hit all of the different parameters of regional cuisines of Mexico. Though we offer tacos and enchiladas, we have items on our menu from the central area of Mexico such as beef tenderloin filet served with jumbo shrimp and many seafood dishes that you don’t often see in Mexican cuisine.

Bell: We work with a lot of fresh ingredients brought in daily and have a strong focus on trying to find unique ingredients. Luis Sanchez’s mother loved cooking and inspired him, including one of our most popular desserts, flan, which is based on her recipe.

On what basis has Consumer Reports ranked Abuelo’s the number one Mexican restaurant chain?

Bell: They do a ranking system based on value, cleanliness, food quality and service. We ranked number one based on their broad-based system.

Bell: That seems to be a big driver of what customers want to see. By not offering it, you’re leaving yourself out. There are some things on our menu not considered healthy, but when you start talking about seafood and chicken, we have many items that are. One of my favorites is a seared tuna appetizer.

Abuelo’s has expanded over the years, but is taking a breather to remodel in 2019. Why?

Bell: As you can imagine after a while, there are some buildings that need to be modernized. We have a strong presence in western Texas, which is where we started, and that area is starting to boom and grow. We want to be ready to grow in that area.

Many restaurant chains grow through franchising, but all of your 35 units are company-owned. Why grow that way rather than franchising?

Bell: I think that our biggest reason is we like the control of the product. When you do franchising, you give up ownership and bring in a lot more voices.

Who is the target audience that dines regularly at Abuelo’s?

Bell: It’s younger families in their upper twenties and thirties who appreciate the atmosphere and food quality and price points.

Delivery is a fast-growing segment. Do you offer it?

Bell: We are currently aligned with Doordash, starting last fall. It’s been good for us, and so far, we’ve seen over 100% growth rate in takeout. If you’re not participating in that market, you’re left out.

When do you step up growth efforts?

Bell: We’ll start up next year and the year after that. In fact, I spent yesterday looking for locations for next year.

Where do you expect Abuelo’s to be in two years?

Bell: I’d like to see us at 40 locations, and I think we have a really good future. We’re looking at new items for our menu.

Describe the three keys to its success.

Bell: 1) Great execution of our concept, 2) Getting the message out to our consumers about our offerings and values, 3) Taking care of our employees.