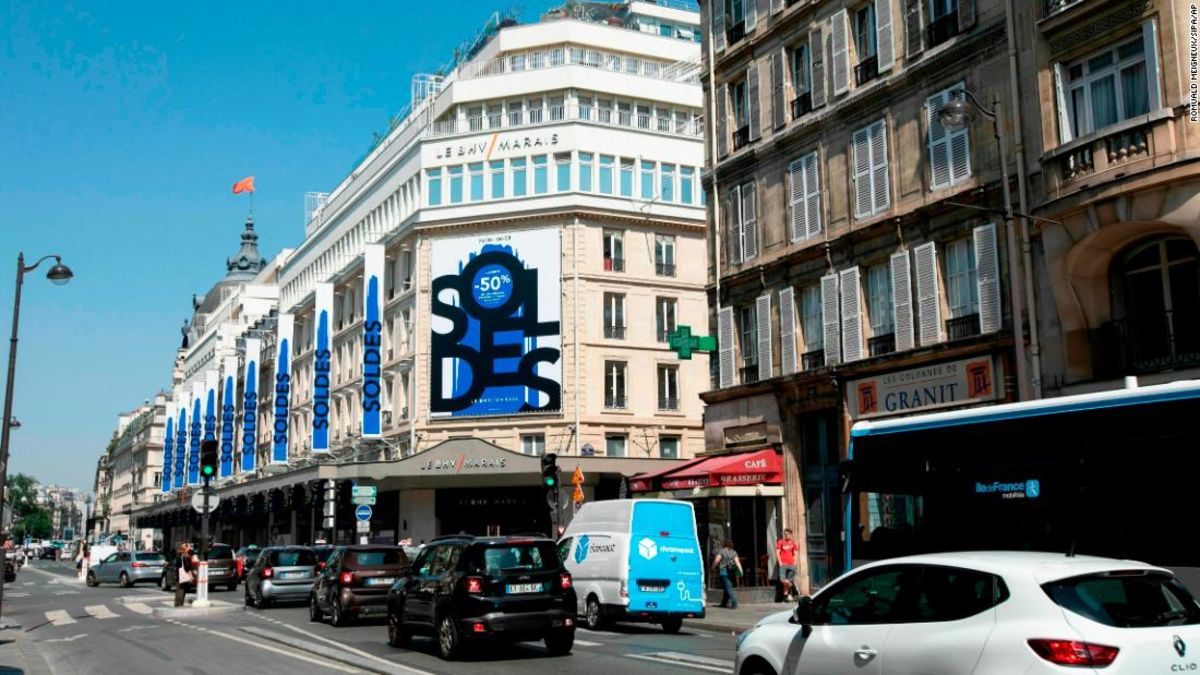 (CNN) — Paris, and the French people, are famous for timeless, seemingly effortless style — something about the casual way they tie a neck scarf?

And shopping in Paris, in addition to yielding chic clothing, accessories and interior items, is a fantastic way to see the City of Light, neighborhood by neighborhood, store by store.

“Fashion is a cultural pastime in Paris, and shopping here is more about the atmosphere, like the gorgeous layout at Le Bon Marché,” than the actual purchases, observes Karen Park-Goude, a stylist who moved from New York City to Paris three decades ago and has worked with high-fashion stores and brands including 10 Corso Como Milano.

“What I love about Parisian shopping is access to every major and many minor creative brands, at our fingertips.”

Accessories designer Christen Maxwell, who lives in New York and has a pied-a-terre in the 6th arrondissement, concurs, observing that “after 15 years in New York, Paris has been the ultimate cocoon for inspiration. The French have mastered the je ne sais quoi.”

Like any big city, though, figuring out where to shop in Paris can be daunting.

There’s a lot of ground to cover and if you don’t have a general idea of what you want and where you want to go to find it, you can whittle away your days there without significant shopping success — not that slowly meandering through the streets of Paris is a bad way to spend any given day.

Read on for our picks of the six best shopping streets and neighborhoods:

“If you only shop one Parisian neighborhood, Saint-Germain is it,” advises Maxwell, who admits she’s biased because this is where her flat in Paris is. Home to the city’s oldest church, the medieval Saint-Germain-des-Prés, and the Musée d’Orsay, the area feels historic but also vibrating with contemporary life, like much of Paris.

The Saint-Germain-des-Prés neighborhood is rich with history and covetable shopping opportunities.

On days she wants to be a shopping flaneur, as the French call one who wanders aimlessly, Maxwell has a routine.

“Start with a coffee at Cafe de Flore, then stop by Buly 1803 to pick up a stunning perfume or body oil.” And bonus: Maxwell says the on-site calligrapher will personalize a box for free if you want to make one of their sumptuous products a gift.

She traipses over to Rue Bonaparte to explore European brands (Ba&sh, Lancaster Paris, Bimba y Lola and Des Petits Hauts are all neighboring shops), nibbles one of the city’s best pastries at Pierre Hermé and then hits “the best department store in the world,” Le Bon Marché, which hosts art installations and shoppable exhibits such as the current So Punk Rive Gauche.

When you need a break for espresso or a glass of rosé, there are cafes aplenty in Saint-Germain, such as Le Bar du Marche.

Park-Goude also loves Le Bon Marché, regularly stopping by the épicerie, for “edible accessories” and condiments for the night’s dinner.

She also likes the boutiques that stock small Parisian designers, like Irie, where she worked when she first moved to the city, as well as sleek interior design shops Adele Shaw, Cassina and Galerie MCDE.

If you stumble down to Rue Madame, Maxwell says, and into Maison Kitsuné (which just opened its first restaurant in Paris), “you’re off the beaten path on a residential street, but you feel like you’re a cool kid in the Marais.”

Locals swear by Paris’ apothecary CityPharma, which Maxwell says is “worth the chaos for the best priced and stocked pharmacy, with dozens of associates to help you stock up on lotions and potions.”

In this neighborhood, when shopping hour ends and happy hour/dinnertime begins, there are as many cool restaurants and bars as there are stores.

Packed with tourists, the Champs-Élysées offers both a great photo-op and lots of big fashion retailers.

One of the most famous avenues in Paris, the Champs-Élysées historically housed big luxury fashion brands such as Louis Vuitton, Cartier and Guerlain. More recently, mainstream brands such as the Gap, Zara and H&M have planted flags there.

Local fashion lovers may avoid this area, likening it to Times Square in New York as both are saturated with tourists and not particularly unique in terms of shopping. But if you’re a Paris newbie, the avenue is worth at least a quick stroll, particularly during the holidays when seasonal markets pop up.

Park-Goude notes that a new outpost of the department store Galeries Lafayettes has opened up there, with a “high-end selection, more international designers, and a terrific basement beauty section.”

When you’re ready for a break from lèche-vitrine loosely translated as “window shopping,” pop into the most famous location of macaron and tea café Ladurée for a sweet and relax taking in the view of the Arc de Triomphe.

Just steps away from the Louvre and the Tuileries Garden, Rue Saint-Honoré is “the ultimate street for window shopping at la crème de la crème of French designer brands,” including Hermès, Goyard and Céline, says Maxwell. This isn’t the area for fast fashion, but walking this area delivers an essential slice of Paris.

The upscale street also includes smaller shops, such as housewares and candle maker Astier de Villatte, and a number of upscale jewelry stores such as Boucheron and Graff, anchoring the early 18th century square Place Vendôme.

Tourist alert: This street confusingly changes names, to Rue du Faubourg Saint-Honore, when it crosses Rue Royale. “Faubourg” loosely translates to “outside the city” in Latin, and the Faubourg part of the street was initially situated outside of city walls. But locals consider it essentially one street/area, all ripe for high-end shopping.

Part of the joy of shopping in Paris is seeing centuries-old monuments, such as the column of the Place Vendome off Rue Saint-Honoré.

Once you’re done looking at diamonds and high-end runway looks, a cocktail may be in order.

If a perfectly prepared, upscale martini in a historic literary setting is your thing, step into Bar Hemingway at the Hotel Ritz Paris nearby, or opt for sceney cocktails at the Costes Hotel.

Rue de Rivoli is a very long street, spanning about 6.4 kilometers (4 miles) and offering a wealth of treasures, from mainstream street fashion to small indie boutiques. You could easily spend an entire day on Rue de Rivoli, getting lost into all of the side and cross streets — and if time permits, you should.

One section not to miss: the eastern end of the street, past Hôtel de Ville, that runs into Le Marais district.

One Paris local calls department store BHV/Marais a “modern-day upgraded Sears” where one can find “everything and anything.”

A not-to-be missed flagship is Le BHV/Marais (the acronym stands for Bazar de l’Hôtel de Ville) — it’s “a modern-day upgraded Sears,” says Park-Goude. “I am there at least once a month, for everything and anything, from hardware to fashion, to the hip terrasse bar Le Perchoir.”

From there until where Rue de Rivoli turns into Rue Saint-Antoine, the street is packed with clothing and accessories boutiques, vintage stores and plenty of spots to stop for an espresso, snack or verre du vin.

Head north from Rivoli up any of the cross streets — Rue des Archives, Rue Vieille du Temple — into the heart of Le Marais for small boutique heaven.

The Marais, Park-Goude says, is “the best neighborhood for shopping. It’s so eclectic, you can find everything there.” She loves exploring the northern Marais for curated clothing shops such as The Broken Arm and stopping at Breizh café for traditional Brittany crepes or a gelato at Grom.

A visit to the cool Le Marais district in Paris won’t be complete without a stop at the concept store Merci, which also houses a “used book cafe” and a cantina.

Don’t leave Le Marais without a visit to Merci, says Maxwell, “an iconic concept store with a cultlike following that changes themes throughout the year,” to get affordable gifts such as string bracelets, and then refueling with an Israeli snack at Miznon.

The Haussmann-Opéra is “your go-to for big department store shopping,” says Maxwell.

Along or just off of Boulevard Haussmann are the original Galeries Lafayette (and its Gourmet and Maison outposts across the street), as well as Printemps.

Printemps, billed as the largest beauty department store in world, anchors Boulevard Haussmann for many Parisians.

Plus there are your standard fast-fashion brands such as H&M and Uniqlo, as well as the ubiquitous Sephora and Apple stores and more.

Which is not to say it isn’t a pleasant experience! Recommends Maxwell: “Pop up to the top level of Printemps to take in the sights and sip a café at one of the few rooftop cafes in the city, then take a quick stroll down to the opera house Garnier and take in its magic opulence!”

The Canal Saint-Martin snakes through upper Eastern Paris and is a less touristy, arty-hip area with a bit more obscure boutique stores.

Another off-the-beaten path neighborhood for small boutiques, cafes and bars is the area around Canal Saint-Martin, including Rue des Vinaigriers and Rue de Lancry.

“It’s a grungier neighborhood, but authentic,” explains Park-Goude, and great for people-watching.

She likes to pop into Artazart bookstore and old Paris standby fashion shop Agnés B, pause for a coffee at Prune Café, and maybe later a glass of wine and some tapas at Le Verre Volé.

Fancy a nosh in between shops? Grab a gluten-free bread — yep, they do that in Paris! — at Sain Boulangerie and sit along the canal for views you’ll write home about.

How to get around Toronto like a local
How to get around New York State by train, plane and automobile
Find the best Las Vegas experience for you: 10 trips sorted by travel type
Holiday Gift Guide: The Best New Scotch Whisky Of 2022
The best hotels in London for Christmas