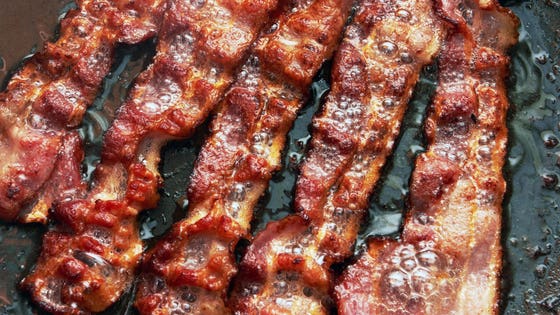 For years, doctors, public health officials and scientists have been urging us to eat less red and processed meat, as it can increase our risk of heart disease, certain kinds of cancer, and death.

And it’s paid off. Americans are eating less red meat than they were two decades ago. But now, there are concerns this trend could reverse.

Earlier this week, an international group of 14 researchers published new nutrition recommendations, arguing that advice to cut our meat intake isn’t backed by sufficient evidence, and that we should continue eating the same amount of meat.

‘For the majority of people, but not everyone, continuing their red and processed meat consumption is the right approach,’ says one of the authors, Bradley Johnston, an associate professor of community health and epidemiology at Canada’s Dalhousie University. This, he adds, is around three to four servings per week.

The researchers carried out three reviews, looking at 61 studies in total, involving more than four million people, that examined whether eating red or processed meat increased the risk of heart disease and cancer.

They concluded that their analyses raise questions about widespread advice recommending people to cut down on meat intake, and that this advice is based on evidence that isn’t there.

But the new guidelines have met a lot of criticism, including from the American Heart Association, the American Cancer Society and the Harvard T.H. Chan School of Public Health, and there are concerns that the analyses may influence future dietary recommendations.

The American Institute for Cancer Research have contested the panel’s conclusions, and said that, ‘Regularly eating processed meat, and higher consumption of red meat, increases your risk of colorectal cancer; suggesting that there is no need to limit these foods would put people at risk of colorectal cancer and further undermine public confidence in dietary advice’.

Scientists at Harvard warned that the conclusions, ‘harm the credibility of nutrition science and erode public trust in scientific research,’ and say publishing them was irresponsible.

For one, the authors are recommending that we continue to consume the same amount of processed meat, which the World Health Organization has deemed carcinogenic.

And doubts about the researchers’ findings aren’t just external; of the panel of 14, three voted against the final recommendation.

One criticism aimed at the new guidelines is that the panel’s methodology was particularly harsh. The researchers point out that most data looking at the relationship between meat consumption and health is observational. This is where study participants are asked about their dietary habits, and researchers deduct patterns from the data they collect.

While cause and effect can’t be established with absolute certainty in observational trials, the vast majority of studies across all areas of nutrition rely on this methodology. The gold standard for research is the randomized control trial, however this involves placing people on specific diets over long periods of time, and can be unethical and difficult to carry out.

Also, research is conflicting in every area of nutrition, but this doesn’t mean findings are not valid, especially when there is a consensus across studies.

Research around nutrition has been found to leave people confused about which foods to eat and what to eat in moderation – and these new guidelines don’t help. Of course, it’s very important that all research is held to rigorous standards, but the headlines generated form these new guidelines will not help efforts to inform people on useful research on the benefits of a plant-forward diet, and the risks involved with overconsumption of red and processed meat.

The panel had one other huge oversight; the movement to eat less meat isn’t just for the good of human health. It’s also one of the most effective ways we can limit greenhouse gases released from industrial animal agriculture, and address animal welfare concerns.

Meat and dairy are huge contributors to climate change. Animal agriculture accounts for around 14.5 percent of the greenhouse gases humans emit globally every year. No study will ever find that continuing to eat the same amount of meat is better for animal welfare or the planet than cutting down or stopping.

And here is just one indirect link between health and meat consumption, since climate change is bad for our health. Rising temperatures caused by global warming put us at a higher risk of heat-related illnesses, such as heat stroke and hyperthermia, and death, and worsen health conditions, including asthma and heart disease.

If there is anything that nutritional research has established, it’s that consuming fruit and vegetables is one of the healthiest things we can do. Also, numerous studies have found that a plant-based diet reduces the risk of heart disease and death.

Encouraging people to carry on as normal and continue eating the same amount of meat only reinforces the belief that we can continue business as normal – which is dangerous, because we can’t. The standard American diet doesn’t meet current dietary guidelines. It’s low in fruit, vegetables and fiber, and too high in saturated fat, sugar and calories. It’s causing us to die earlier, and develop heart disease, some cancers and diabetes.

Ultimately, we need to consume more of the foods that will lower our risk of diabetes, heart disease, stroke, cancer and death. That means we need to be filling up on fruits, vegetables, whole grains and legumes, while limiting our intake of saturated fat, and ensuring we’re not over-consuming calories.

And that’s just to benefit our health. When you factor in animal welfare and reversing the worst of climate change –we should drastically reduce our meat intake, and no panel of researchers can contest that.