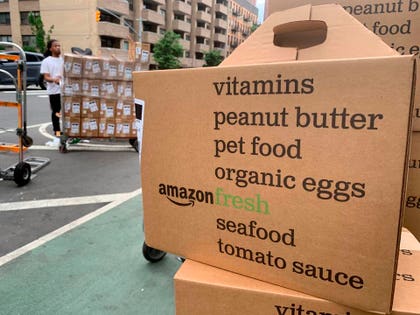 Amazon is moving forward with plans to open a chain of grocery stores in the United States. The company signed multiple leases in Los Angeles, according to the Wall Street Journal. It may also open grocery stores in Chicago, Philadelphia and other parts of the country. Michelle Engle, senior vice president of marketing at Valassis, shared what this means in an interview.

Engle believes it makes sense for Amazon to expand into physical stores because consumers still shop online and offline. Many purchases, particularly in the grocery category, occur offline. Operating brick-and-mortar stores gives Amazon the ability to collect more information about its customers and could create another avenue for Amazon to grow its Prime memberships.

There are also different expectations specific to grocery consumers that this expansion addresses. According to Valassis research, 64% of online grocery consumers miss touching and smelling produce, and 62% of consumers are not comfortable having someone else choose their produce.

“It is natural that driving in-store traffic for Amazon will influence online shoppers to try items in-store and potentially purchase them. By expanding their brick-and-mortar format, Amazon may also tackle some of the online challenges above while appealing to new shoppers and existing online consumers,” Engle added.

Amazon is expanding on various experiments it already has with brick-and-mortar stores, including returns at Kohl’s and pick up and returns at Whole Foods. This is part of the strategy to blur the lines between online and offline shopping, so they can reach consumers across all types of purchase needs, such as planned purchases and real-time, need-it-now impulse buys.

Consumers go to more than four grocery stores per month to buy groceries. This means there is space for both Whole Foods, which Amazon owns, and Amazon’s new grocery stores to coexist, but they must meet different needs for shoppers to avoid direct competition with each other. A deep understanding of a customer’s needs and purchase intent can make both types of stores work long-term.

“Amazon will have to consider their target customer for each store and where there is overlap. It all boils down to knowing their consumers and then catering their offerings, deals and shopping experiences accordingly based on specific demands. Listening to consumers shopping at both Whole Foods and Amazon grocery stores will be vital,” Engle said.

As the industry continues to evolve, grocery retailers have to reinvent themselves to keep up. For example, European retailers have entered new markets and have revamped their stores to stay relevant. The dollar channel, which includes stores like Dollar General, is expanding to offer fresh food options. More traditional grocery retailers have adopted delivery and in-store pickup options.

According to the Wall Street Journal, Amazon appears to be aware of the trend and will offer prepared food in its grocery stores by operating its own kitchens. Amazon already has a presence in physical stores with Amazon Go, Amazon 4-Stars and Amazon Books, so no one is surprised to see the company continue to expand by opening new grocery stores.