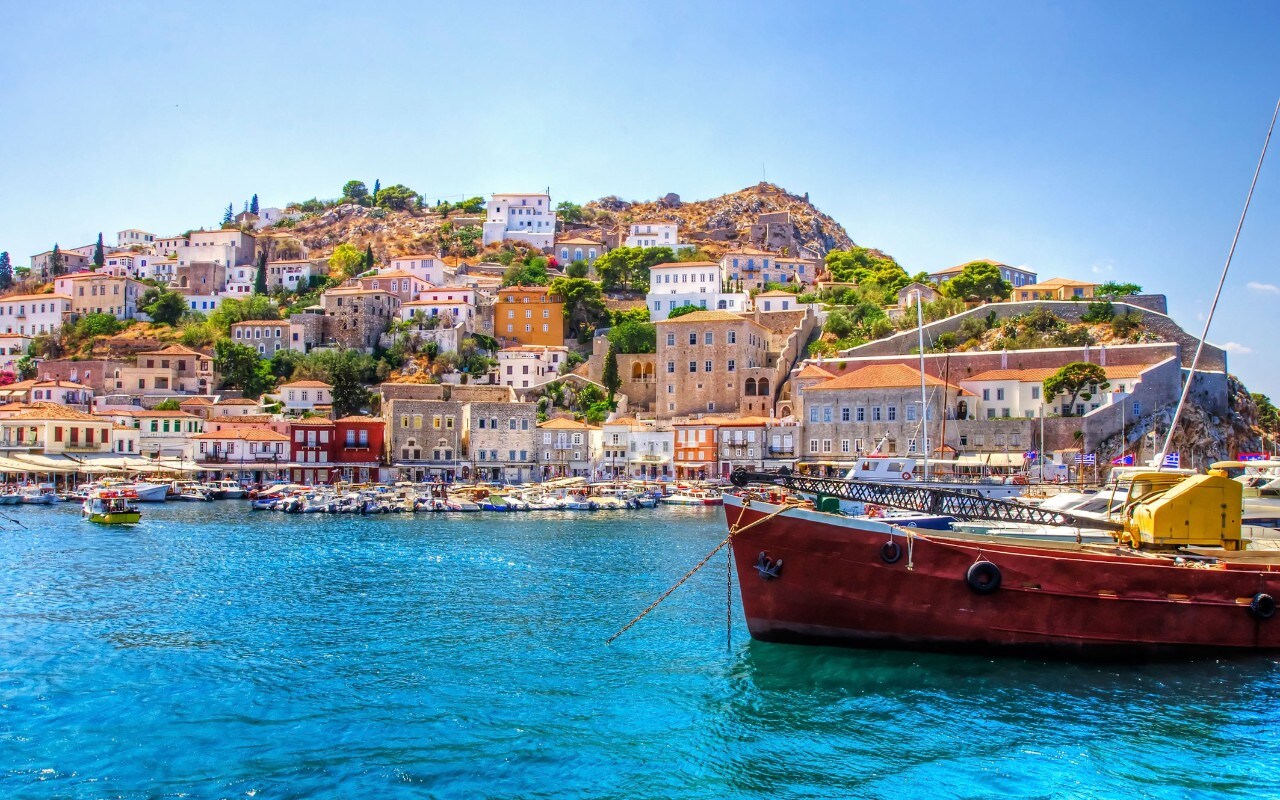 “They’re plump, they’re sassy and they floss their teeth.” I had just stepped off a tender boat into the furnace-hot heat of Hydra and our SeaDream tour manager, Jeff, was introducing the local transport. A heat haze that danced above the jetty but I could just make out a handful of tethered donkeys at the far end. Groomed, lustrous and well padded, these were the Mercedes of donkeys. With one eye on my flip-flops and the other on the ladders of steps that comb the hillside town one of the muleteers handed me his card. “For later,” he winked.

Although I had no intention of riding one, donkeys are the modus operandi on this car-free, picture-postcard Greek island. It is said that during Leonard Cohen’s stint here in the Sixties Hydra’s famous adopted son knew he had become one of the locals when the rubbish collector began calling at his house, (which I later hoped to find), with a donkey. Mules move everything from groceries and building supplies to fridges, octogenarians and mountains of lemons. All of these loads overtook me as I wound uphill past townhouses, pocket-sized chapels and mansions flanked by exotic gardens and well-tended courtyards towards the Monastery of St Constantine.

This was much-needed exercise. While most passengers on the 112-passenger SeaDream II had spent a few days in our ship’s embarkation port of Dubrovnik, or were enjoying the luxury of a back-to-back cruise, I had arrived fresh from the office and as tightly wound as a Swiss clock at a Brexit negotiating table. With stops at Itea, Hydra, Patmos, Naxos and Mykonos we would sail through maritime passages that resonate with mythology.

But as we approached our first port, Itea, and SeaDream II emptied out for excursions to Delos, or a cycle ride through Parnassos National Park, I flopped onto one of the ship’s day beds and lined up my Kindle with the horizon – and pretty much stayed that way for two days. It doesn’t take long to slip into the rhythm of life at sea when each day the sun shines, breakfast segues into lunch and the ship motors gently on to drop anchor at the next harbour.

At first, the absence of announcements (so prevalent on larger ships) gave me FOMO. Was everybody somewhere I wasn’t? There was no daily captain’s update; no call for excursion departures. But this is the whole point of a SeaDream Yacht Club (to give it its full name) cruise. “Yachting, not cruising,” is its mantra. To call our ship a yacht was pushing it – the hardware is getting on a bit (SeaDream I and II were built in 1985 and 1986 respectively) but regulars return again and again for the house-party ambiance, the relaxed but finely tuned service and outstanding food. At breakfast you can sprinkle bee pollen over homemade granola.

Come evening, dressed in “yacht-casual” attire, you can choose from a raw-food menu or go full vegan without raising a waiter’s eyebrow. The first night I dined alfresco on grilled halibut with gingered white asparagus and a beurre blanc sauce. I was joined at the table by two Australians and a friendly Norwegian on his 18th SeaDream cruise. “The chef loves to listen and find out what you like,” said one half of the Aussie couple. “Anyone that doesn’t like the food on here is a muppet.” I had too much gold-leaf topped chocolate fondant in my mouth to comment.

Service is personal; polished. One morning a couple of regulars rolled up to the Top of the Yacht bar at 11.30am and ordered Champagne with eggs Benedict and all the trimmings. Only they didn’t order. They simply bid maitre d’ Silvio a ‘good morning’ and sat down. Fifteen minutes later brunch just… arrived. My preferred type of coffee was soon noted and over the next few days staff took it upon themselves to gently direct me around the (small) ship.

Relaxed though it was, my first day on board wasn’t entirely devoid of excitement. Late afternoon the ship was scheduled to transit the Corinth Canal. This channel between the Peloponnese and Greek mainland shaves 400 miles off a captain’s log. Transiting vessels cannot be wider than 58 feet, which precludes most cruise ships. SeaDream marked the transit with drinks and nibbles. I headed out on deck to find the baby boomers owning the occasion – clinking flutes, availing of canapés and generally having lots of fun. (Doh! Who waits for the timetabled approach time?).

As we approached the mouth of the Corinth I found myself curiously excited – in part because it looked like we were headed straight for a mountain. “Where is it?” I asked one of the sailors as a tug guided us towards a wall of limestone. Then, of course, a gap appeared and the narrow isthmus swallowed us up. With mere inches to spare between the bridge wings and sheer walls it was a tight fit. Even the boomers calmed down for a bit. Sliding under two high bridges where observers had lined up to wave we emerged four miles later into the peachy post-sunset glow of the Saronic Gulf.

On sea days passengers read by the pool, perched at the bar or settled into one of eight, sea-facing double day beds designed with privacy and afternoon napping in mind. I wondered, who are these people doing back-to-back cruises and ordering their first Old Fashioned before the yard arm reaches noon? A serial cruiser I met in the pool one morning summed it up. “What do you do when you are minted enough to take several luxury holidays a year but can’t be bothered with your own yacht? You sail on SeaDream.”

While at anchor a marina platform plops down at the back of the ship for kayaking, cat sailing and swimming. I didn’t find the sea as conducive as I’d hoped for paddleboarding. No sooner was I up on the board than I’d be upended by a pesky white crest.

The day after my boarding dawned overcast and breezy. Up early, I caught a rare sighting of the captain, who was doing his rounds. “I haven’t seen the cloud nor the mist for many months,” he said. “It’s the only thing that we can’t control.”

After breakfast we learned that the Patmos beaches caique tour was cancelled due to high winds. Each morning I’d noticed a fleet of shiny mountain bikes propped against the rails of the tender deck. Plan B unfurled.

“Any tips, Jeff?” I asked as I wheeled the bike off. “Gyros and Greek yoghurt – Patmos has some of the best of both. Other than that you’re here for St John.” The Monastery of St John, where Saint John the Theologian is said to have written the Book of Revelations, crowns the hillside port, its sombre battlements looming incongruously over the whitewashed Chora spread at its feet.

But inside those solid 15th century walls I found colonnaded courtyards, inlaid stone floors and hidden crypts. Enjoying the drape of the building’s shadows on my shoulders I counted the residents – kittens: eight; monks: four, before making my way to the diminutive Chapel of St Christodoulos. Now a museum, the frescoed room holds chalices, crowns and manuscripts and… rather more thrillingly, the skull of “doubtful Thomas”.

By the time I reached Skala (the lower town), just after 2pm, I didn’t much feel like gyros. Instead, for a couple of euros, I caught a bus to the shingley beach of Grikos, about four kilometres along the coast. There, I swam in limpid water and snoozed under the feathery fronds of a tamarisk.

I’m glad I skipped gyros. That evening the chef had prepared a poolside seafood amuse bouche of fat prawns, langoustines and caviar served the traditional way – atop a whipped egg. On this, our penultimate night, I had signed up for one of the cruise line’s signature experiences – the Balinese Dream Bed. An invitation in my cabin confirmed my reservation. “Kindly be advised that your bed under the stars has been prepared for you tonight. Sweet Dreams!” Next to the invitation were some initialled pyjamas. The bed was conceived as a romantic treat – the chance to sleep on a semi-circular bed under a canopy in a secluded area at the front of the ship with a butler and Champagne included. Now staff make up two or three more alfresco beds on the day beds.

Around 10.30pm I ventured up to the top deck and tried to get cosy in bed number 7. But a breeze fanned my neck and the bed that, during the day had felt so comfy, now felt insubstantial. Dropping off around midnight I woke up an hour-and-a-half later to a howling wind and an unexplained banging from somewhere nearby. Worse, fumes from the ship’s funnel seemed to be blowing entirely in my direction. The air was damp and the sea sounded angry. I felt like I was about to star in my own horror movie and returned to my cabin for a shower and walls. “Don’t worry it’s not you,” said a lady in her 70s when I told the story at breakfast. “I tried it a year ago and lasted half an hour.”

In Mykonos I had booked a place on the island jeep tour ($179). Leaving the chi-chi designer shops (who comes to Greece to shop at Lancome?) and Chinese tour groups behind we motored north in the direction of Armenistis Lighthouse, a lonely seafaring relic with views across the sparkling water to neighbouring Tinos. We then doubled back and headed east, up and over the spine of the island towards Ano Meras and the small but beautifully formed Panagia Tourliani Monastery before stopping for views over the talcum-white bay of Kalafatis. It was a fine end to the cruise.

On Hydra, where it turns out there are no street names I never did find Leonard Cohen’s house, but I had fun trying. Oddly, I found myself directionally challenged on leaving the ship, too. Leaving the ship early I was last off due to a very late flight. Seeking the exit in the small customs and immigration area I somehow ended up back at the beginning, in front of the embarkation luggage scanner. And there at the other side of the body scanner, arms crossed and a knowing twinkle in his eye was Silvio, the maitre d’. “You know we would love you to come back, but I’m afraid it’s not possible. Tonight we are sailing full.” They know their guests alright.