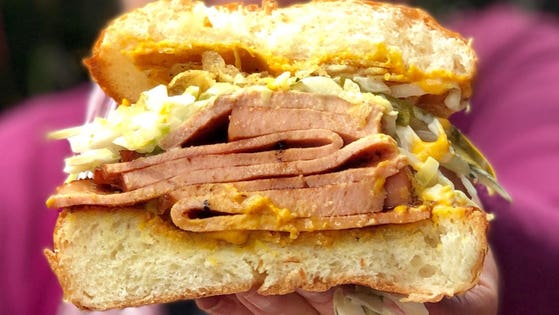 Maybe it’s too early to call Lady Jaye’s barbecue bologna sandwich its all-time best seller. The restaurant/bar opened in West Seattle just a couple of weeks ago, after all. But the shockingly delicious creation from co-chefs Tyler Palagi and Charlie Garrison has been a big hit so far.

The smoker is the key

Before the ink was dry on the lease of the space, Palagi and Garrison had gone on the hunt for a custom smoker. Mission accomplished at Dogwood Distilling near Portland, Ore., which makes custom rigs on the side.

The big barrel smoker’s name is Cletus and it sits on Lady Jaye’s inviting back deck alongside a pile of chopped apple wood, just ready to infuse smoky flavor into menu items: turkey legs, pork belly and cheeks, mushrooms. But it’s the bologna that truly stands out in that “what the heck?” kind of way.

Barbecue curious diners will be rewarded with a deeply flavorful sandwich, finished in a palate puckering dill pickle slaw, plenty of yellow mustard and a carpet of house-made chips.

Featuring a sandwich most folks think of as the staple of grade school lunch boxes was a bit of a stretch, but the chefs knew they were onto something when they spotted a smoky chub on Meat Church’s Facebook feed. “We wanted to do super simple awesomeness and also very intricate, detailed stuff,” said Palagi, who had previously worked with Garrison, and their partners, Sara Rosales and Evan Carter, at Radiator Whiskey. “We decided a long time ago not to take ourselves too seriously. At the end of the day, we’re feeding people, not our egos.”

The bologna is scored and then massaged in a special seasoned salt and then smoked whole. It’s sliced and finished on the flat top grill before being tucked in a tender, yet sturdy Macrina Bakery bun.

“I think it’s glorious, especially the way I’ve had it at Cozy Corner and Interstate in Memphis,” he said. At the former, it’s smoked in thick slabs, and the latter, it’s cooked as a whole chub.

During his research for the book, Miller traveled to more than 200 African-American-owned barbecue joints across the country, and “it was always a pleasant surprise to find barbecue baloney on the menu because when it’s done well, it’s a high art. It’s an inexpensive way to enjoy barbecue,” said Miller, whose book will be published in spring 2021 by University of North Carolina Press.

The lineup of Lady Jaye’s booze-based beverages reinforces the team’s mission to infuse some silliness in everything they do. So, you’ve got to giggle when ordering a tequila-centric Straw Barry Manilow, Guns N’ Rosemary, or the rum-based Big Peasy that’s got sugar snap peas as a bright component. For the fragrant Smoked Old-Fashioned, George Dickel rye carries a whiff of charred wood, not a smoke bomb. In other words, it’s a perfect partner for that bologna sandwich you’re dying to try.

Do I need a visa to visit Switzerland?
Mother Terrorized By Spirits Haunting Nursery | My Horror Story | Travel Channel
What to eat and drink in South Africa
Surfing as Santa Claus in Venice Beach California
NFTs Debut With Interactive Gin, Whiskey, And Fine Wine Projects, Revolutionizing The Spirits Industry