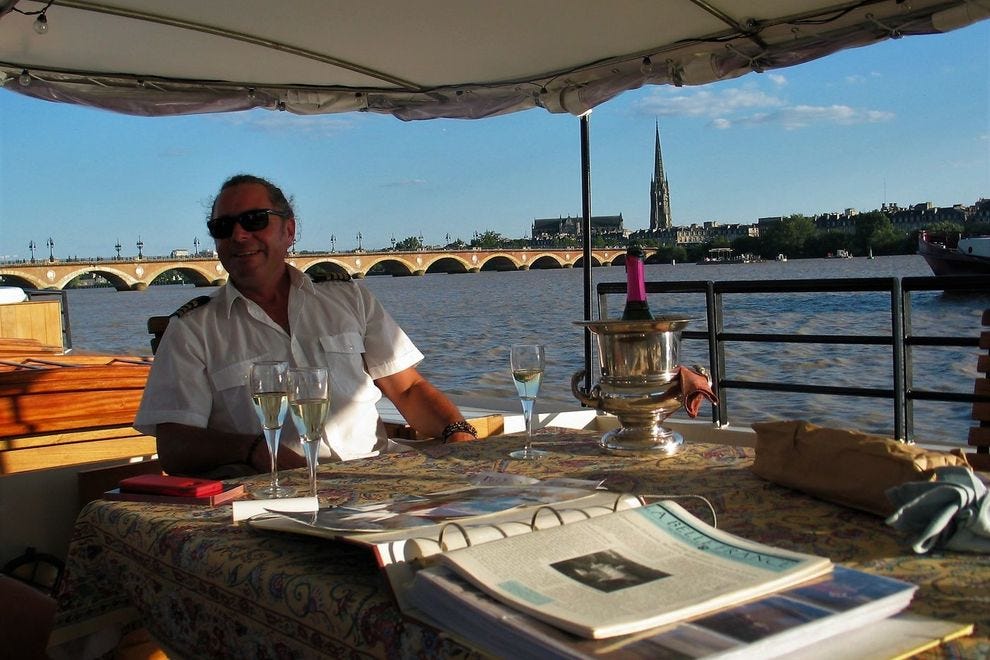 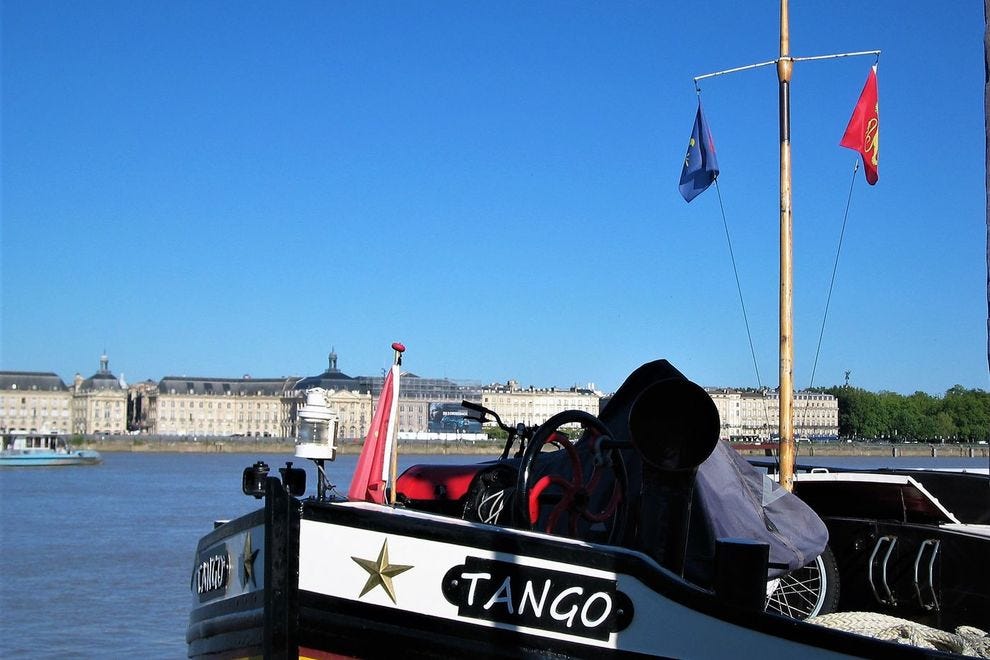 The barge Tango is moored at the foot of Bordeaux’s most famous bridge, the Pont de Pierre. This is the UNESCO heritage Port de la Lune (Port of the Moon) that is pictured in every photo you see of this ancient Southern French city.

Daniel Sak is the luxury barge Tango‘s captain. He is who expertly steers you along the Garonne and Dordogne rivers, as well as the Gironde estuary, as his crew pampers, feeds and waits on you hand and foot for six days. He bought his barge 25 years ago and its glowing mahogany-paneled roomy cabin suites with authentic brass portholes and a decktop Jacuzzi all still sparkle in the southwestern France sunlight.

Even the on-board galley is equipped with a flame stove and its very own private chef named Pierre.

As I am welcomed aboard the Tango, I find that my cabin glows with shellacked wooden paneling and a Provençal yellow-tiled bathroom, featuring a roomy shower. The air-conditioned room is soothing in the summer heat; the queen-sized bed is dressed up in French linens and fluffy pillows. 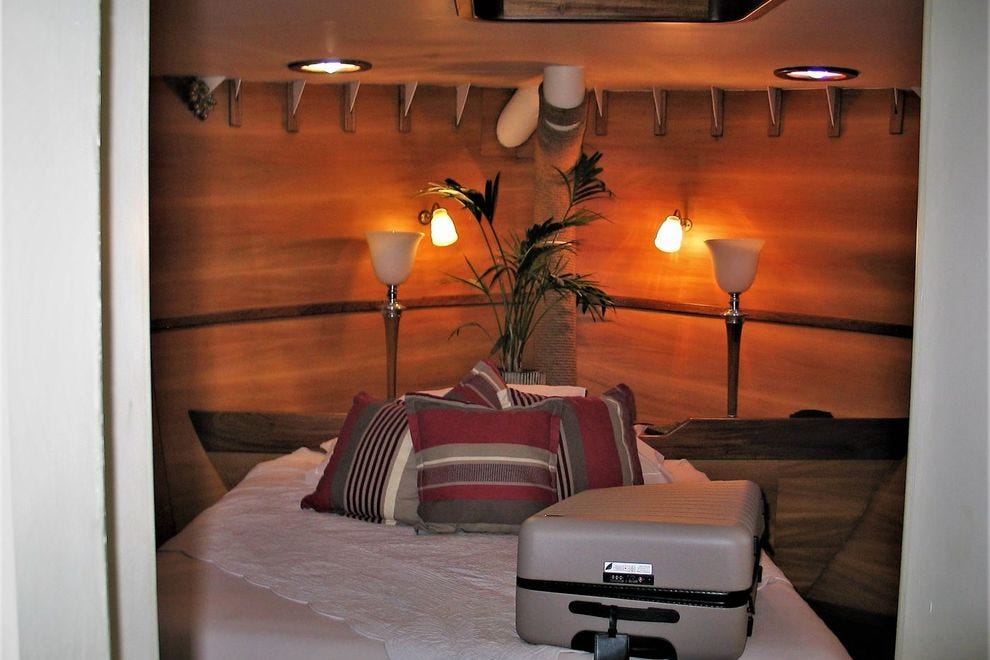 Gently, the sun starts to to sink on the skyline as we chug along upriver. Our destination this evening is Fort Médoc, a military fort built in 1691 whose stone remains are still standing. The tides on the Garonne river are tricky, as any of the boat captains will tell you. For several hours they flow one way, only to reverse a few hours later. 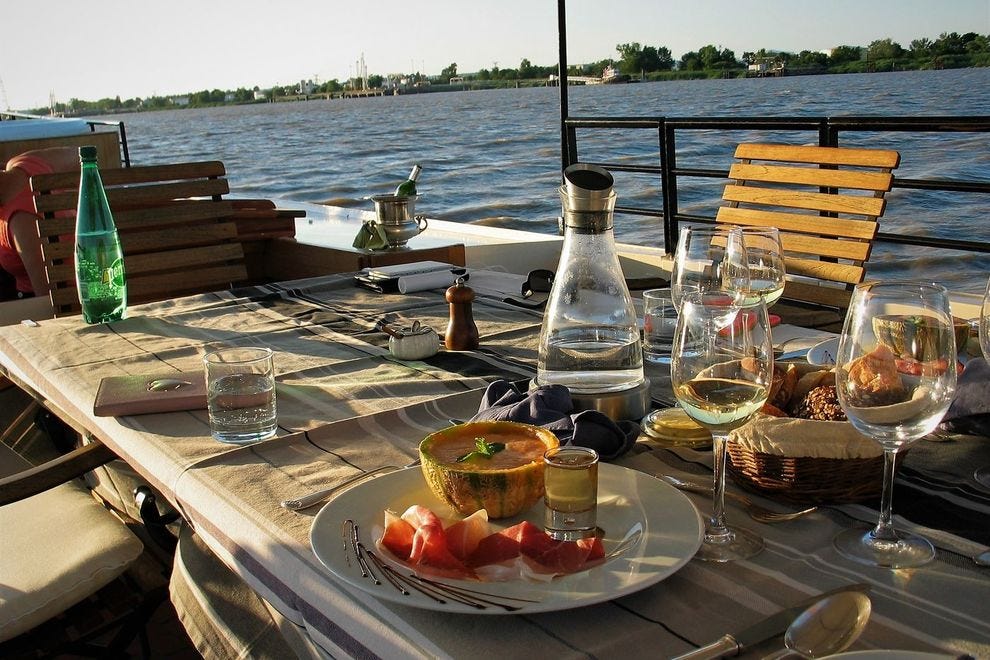 We dine as we cruise, and snap pictures of the sunset and the fishermen’s cabins, cabanes de pêcheur or carrelets in local dialect, as we go. Dinner this evening, by Pierre, is organically raised Landes chicken served with crispy shallots and quinoa risotto.

This has followed a cold cantaloupe soup served with Bayonne ham. A hunk of Comté cheese prefaces our dessert of homemade tiramisu. Wines, like this 2015 Graves, flow all throughout dinner, switched out only for a full-bodied 2012 St.- Emilion by the time the main course rolls around. 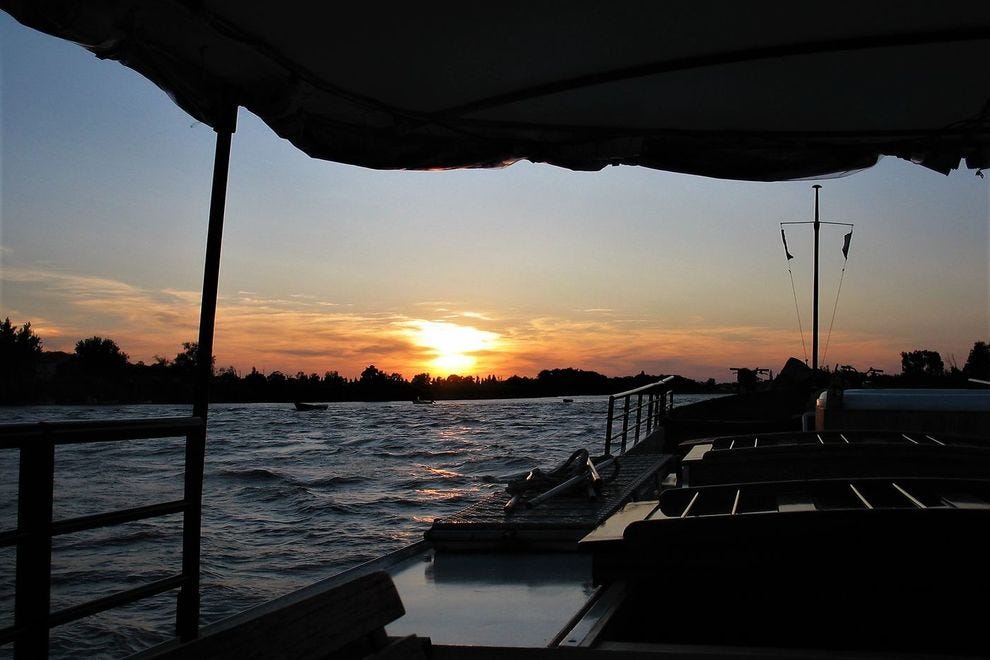 Breakfast, lunch and dinners are served aboard the Tango, cooked in the ship’s galley, market fresh from the farmers’ stalls at the day’s stop. Wines served with meals are from local appellations: Médoc, St.-Emilion, Sauternes, Côtes de Bourg and Blaye. 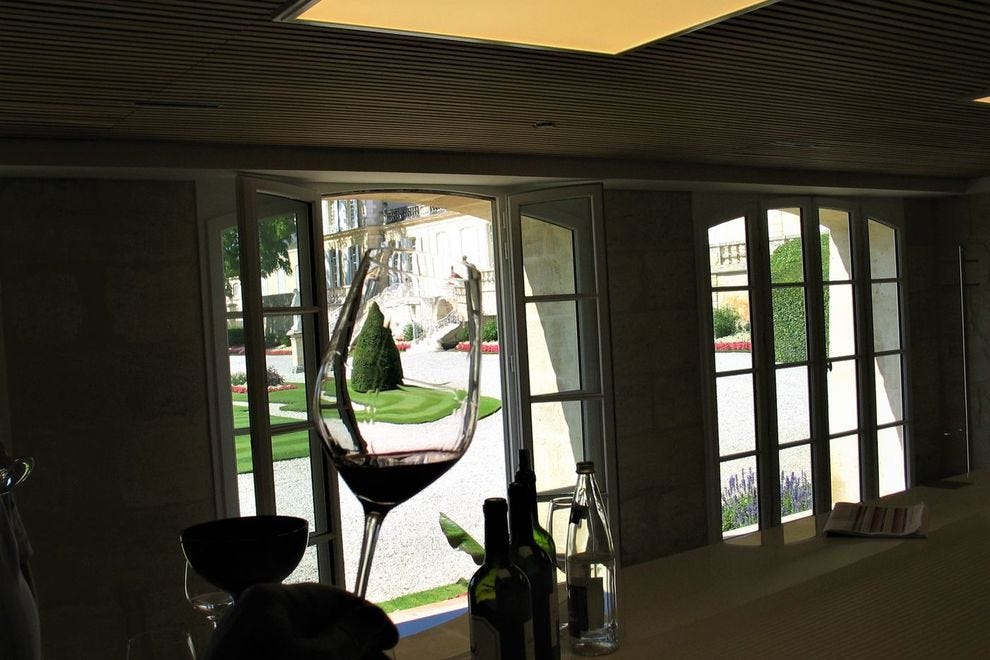 Our full day of wine tasting in St.-Julien AOC in the Médoc includes two Grand Crus classé estates. Beychevelle’s nickname is the “petit Versailles of the Médoc” for its manicured gardens. Its emblem, fittingly, is a full-sailed river skiff. It’s an 1855 Grand Cru classé estate and it gleams with its new vinification room.

Next up is a tasting at Château Lagrange. Today, lunch is in St.-Julien at Chez Mémé, which translates to “Grandma’s Place.” Red-checkered tablecloths and a lunch menu only in French make us feel like locals in a hidden spot. Our last stop is the Château Lamothe-Bergeron.

Exploring the Citadel of Blaye 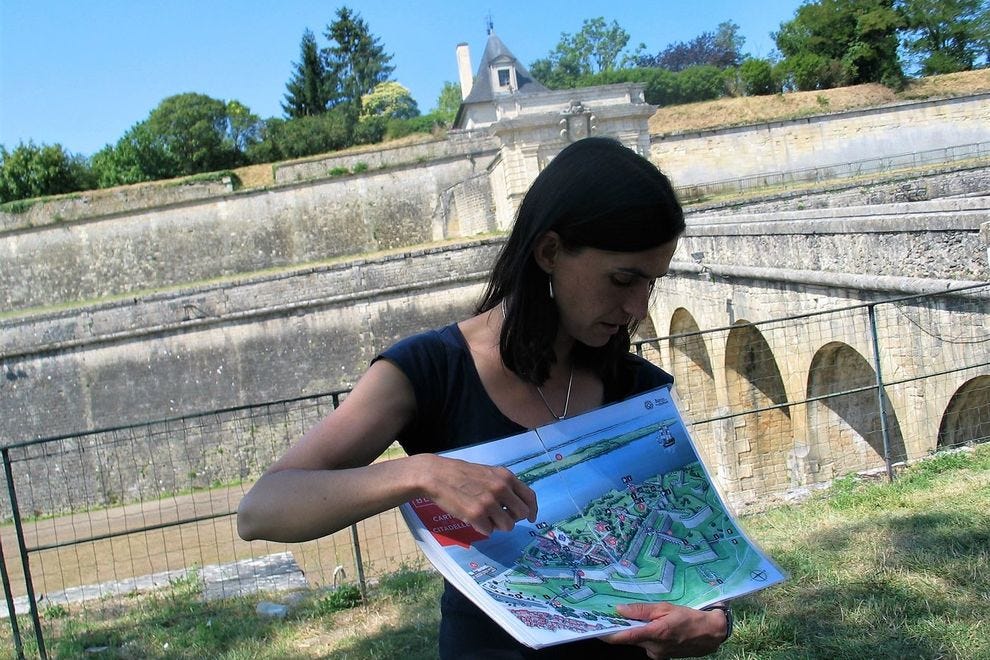 The leisurely cruise over to Blaye, taking in more of this Haut-Gironde landscape, lasts a couple of hours and is the perfect backdrop for our apero hour of chilled rosé. Moored that evening in Blaye, on the Gironde estuary, we are graced with a partial full moon eclipse. This natural wonder is even more breathtaking when viewed against the town’s famous 17th-century fortress, the Citadel of Blaye.

The next morning, we are invited by Pierre to accompany him to Blaye’s fresh market. We shadow him as he purchases fresh heirloom tomatoes, the sizes of which reach a pétanque ball and larger. On our way out of the market, he spots a tropezienne at the pastry vendor – it’s a St. Tropez specialty of light pastry dough filled with crème patissière – and picks it up for dessert later. 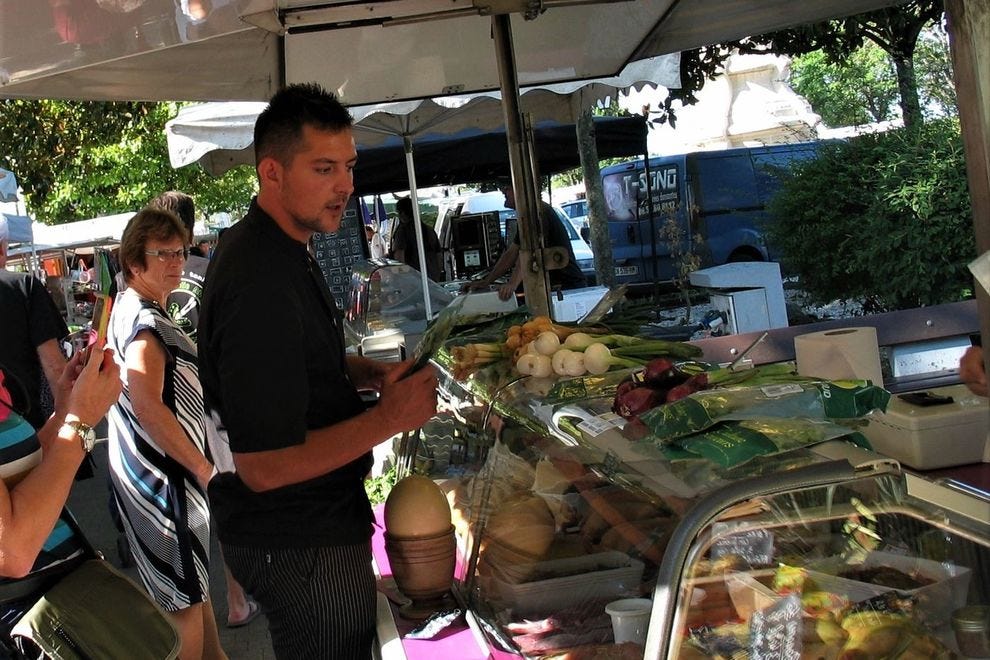 Our guide from the Office of Tourism greets us for the ‘magic key’ tour of the Marquis de Vauban-engineered structure. It was constructed at the behest of King Louis XIV in 1689. Porte Dauphine is the main entrance to this 81-acre stone-walled and moat-enclosed encampment, criss-crossed underneath by hidden doors and secret passageways carved into ancient stone. This UNESCO World Heritage national monument even has its own vineyard, the Clos de l’Echauguette. 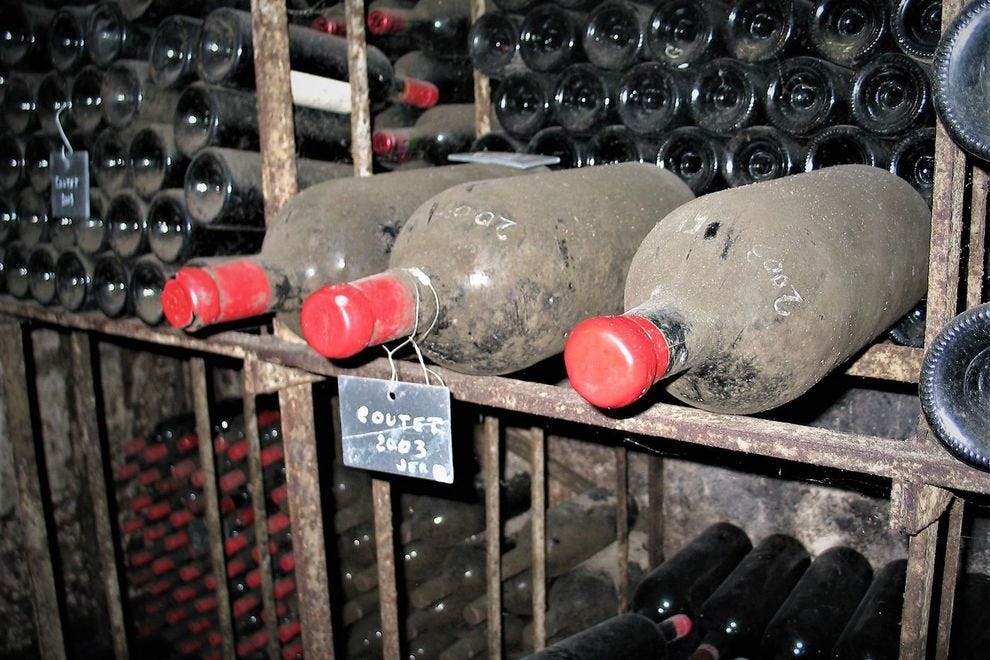 Our half-day of St.-Emilion winery visits begins with the family-owned Chateau Coutet. Here, they still press their grapes by foot-stomping and they harvest by hand.

Next, at Château Franc Mayne, we tour their ancient quarries. Saint-Emilion was quarried from the 13th century up through the 19th century for its rich limestone. The stones were then hauled across the river and used to build the majestic Bordeaux buildings that still stand today. 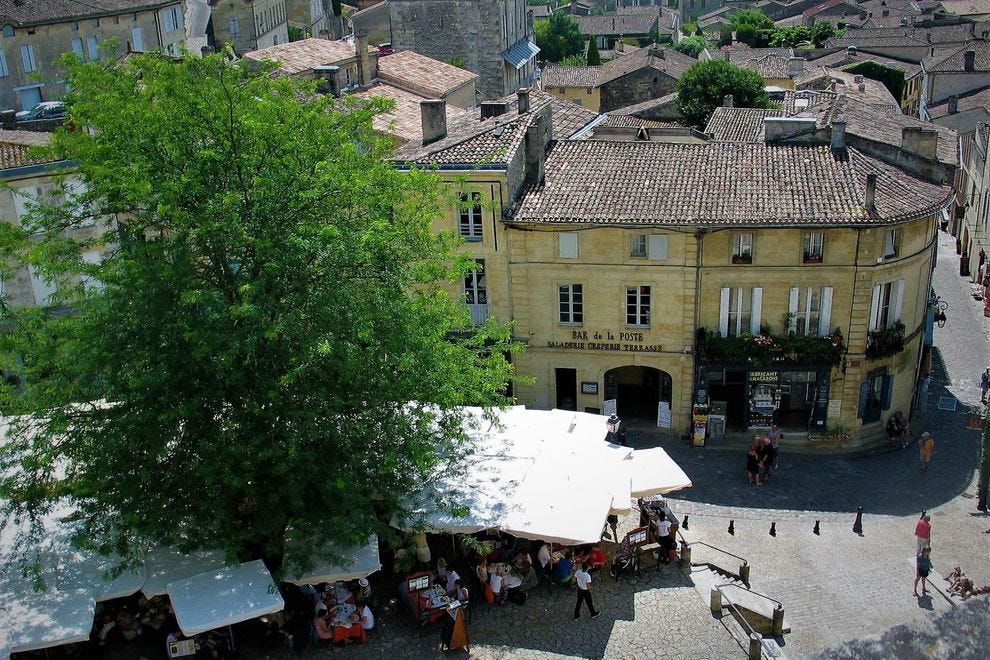 Later, in the village proper of St- Emilion, a stroll down the tiny cobblestoned tertres (steep streets), leads us to the La Tour du Roy, said to have been built in 1237 at the decree of Henry III, King of England and Duke of Aquitaine.

Strolling the historic city of Bourg 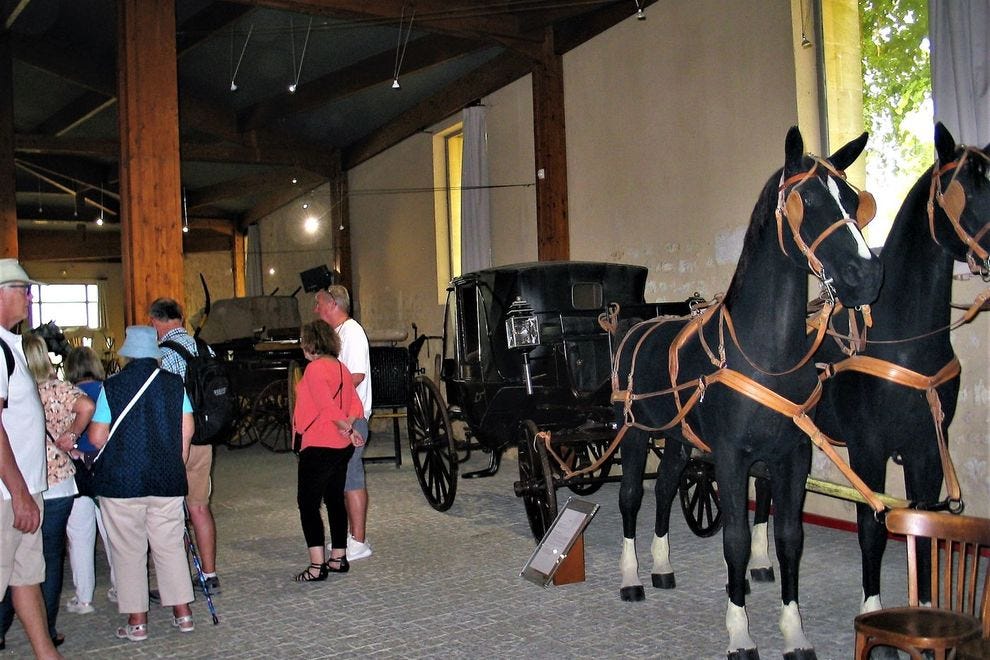 A short walk up the steps of Escaliers du Roy, where Louis XIV once tried to pick a fig, leads us to the one-of-a-kind Carriage Museum exhibiting France’s most complete collection of everyday-use 18th- and 19th-century carriages.

Bourg is quickly blossoming into an artist’s haven. Today, however, we visit the Maison des Vins, since the Côtes de Bourg wines are an important appellation of Bordeaux.

The cruise back on our barge to the center of Bordeaux takes us only two hours. By the time we moor at the dock just next to the Pont de Pierre, Bordeaux’s emblematic bridge, it’s time to take a stroll into the city to sit along the Quai Richelieu and sip a chilled glass of something refreshing before dinner.

Tip: Booking together in groups of 4 people to 8 people max is probably the best way to go on these 6-day trips of massive pampering, sightseeing, food, wine and relaxation à la Française.

Hotels for arrival and departure

The rooftop bar in this iconic of Mama Shelters draws locals and international travelers alike. In keeping with their signature style, food and beverage play a big part of the hotel culture here, but different from other cities, this Mama Shelter is located in the heart of Bordeaux. And the rooms here are surprisingly spacious. Plus, you still get your movies-on-demand.

When you just want to pull back for a minute between destinations and over-stimulation, the modern amenities of the Pullman Bordeaux Lac offer the cool, quiet, soothing comfort you need. There is a pool here, surprisingly good room service, and you’re outside the bustle of the city center, which offers the excuse to just catch up on emails and regroup.

During the off-season, November to March, the luxury barge Tango offers its cabins as hotel rooms. The most surprising thing about this luxury barge is that the rooms are air-conditioned/heated and the showers are hot. There’s a Jacuzzi on deck and the common living room area in the center of the barge has an honors mini-bar and espresso machine.

The gentle rocking of the boat lullabies you to sleep. And the million dollar-view of Bordeaux’s Port de la Lune and Pont de Pierre are worth much more than the price of admission.