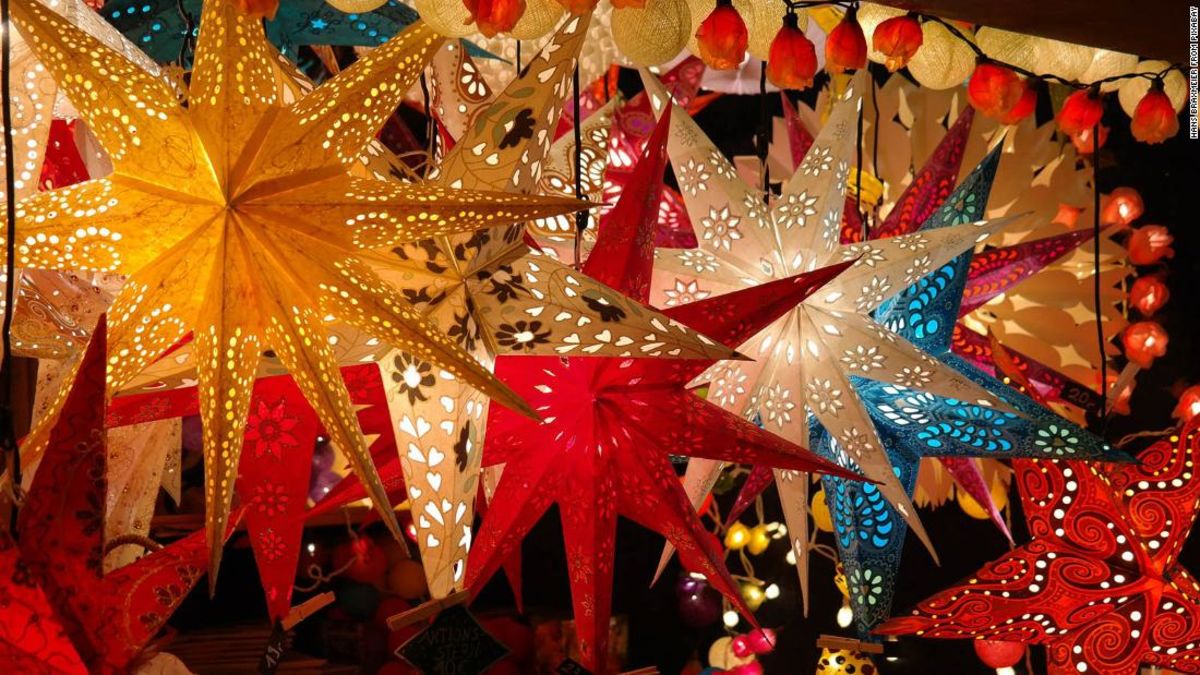 Travel
Share on Facebook
Share on Twitter
Share on Pinterest
Share on LinkedIn
(CNN) — Christmas shopping doesn’t have to mean joylessly battling through department store crowds or trawling the Internet for bargains. Why not combine present-buying with some travel?
These 17 Christmas markets scattered around the world make great destinations for traditional gifts, glasses of glühwein and that unbeatable festive feeling.

Strasbourg, in eastern France, is home to one of Europe’s oldest Christmas markets, with the first edition taking place in 1570.

Today there are 10 locations with 300 stalls, meaning it’s easy to spend the best part of a week here indulging in end-of-year festivities, picking up decorations and presents and drinking local Alsatian wine.

Before getting lost down Strasbourg’s narrow alleyways and beautiful squares, visitors should be sure to head to Place Kleber, where they’ll find the Great Christmas Tree, a towering effort that puts the spruce at New York’s Rockefeller Center to shame.

What makes it special: Strasbourg is just across the border from Germany, so you get a two-cultures-in-one experience.

Christmas on ice: A huge skating rink is part of the attraction of Vienna’s Christmas Market.

Few cities steep themselves in the festive spirit like Vienna. The Austrian capital’s first Christmas Market was held in 1298 and today the city has more than 20 events to choose from.

First timers, though, should make a beeline for the Viennese Christmas Market, which takes place in front of City Hall (Rathaus).

With around 151 stalls serving everything from boozy Christmas punch to gut busting Austrian sausages, the market also boasts a huge ice rink for skating, reindeer rides for kids and a classic nativity scene.

This year’s event will run from November 16 to December 24.

What makes it special: This might be the most traditional Christmas market going, but be sure to try out curling on the dedicated ice rink. A bizarre and brilliant winter sport to keep off the chill.

Toronto Christmas Market is held in the pedestrian-only Distillery District.

Now in its 10th year, Toronto’s annual Christmas market is one of the biggest in North America.

Based in the city’s historic Distillery District, it’s an enchanting scene, with glittering lights, a Santa’s Grotto, fairground rides, beer gardens and holiday vendors selling everything from poutine to one-off Christmas gifts.

The market, which is usually closed on Mondays, also offers up plenty of entertainment, which numerous music performances taking place on a daily basis, including brass bands and carolers.

Its center piece is a dazzling 50-foot Christmas tree.

What makes it special: For the last few years, a 100-foot long light tunnel has been erected at the market, adding even more magic to the festivities.

No city lends itself to Christmas better than Prague.

The city’s two main Christmas markets, in Old Town Square and Wenceslas Square, are only five minutes’ walk from each other, so can both easily be explored in one day. Each one has the usual wooden huts found in similar markets across Europe, but the Czech treats are what really set them apart.

Visitors can grab a klobása (Czech sausage) and wash it down with a Pilsner Urquell in the afternoon, then hang around for the main tree to be lit up on Old Town Square.

What makes it special: The Czechs don’t do half measures at Christmas time. Both markets are open every day from November 30 until January 6, including Christmas Day.

With the Franciscan Basilica providing a backdrop for the 50 stalls, this is the perfect place to pick up stocking fillers and treats without the unerring sense of dread that accompanies the average shopping street in the run up to December 25.

For added yuletide vibe, it’s good to head to Piazza del Duomo for the nativity scene and Christmas tree, which is lit up on December 8, as part of the Feast of the Immaculate Conception.

What makes it special: Although this is every inch an Italian event, there’s a distinct German air to the proceedings too. Keep an eye out for gingerbread and strudel.

For anyone dreaming of a white Christmas, Krakow usually delivers.

The city’s Christmas market, held in Rynek Glowny, the city’s huge main square, typically gets a heavy dusting of snow during December, making a visit here even more magical than some of the big name markets in western Europe.

Hand-painted Christmas baubles are a local specialty, as are spiced nuts and boiled candies. Krakow’s 2019 Christmas market is on from November 29 to January 7.

What makes it special: This is a more all-round Christmas shopping experience, so it’s worth trawling the stalls for cheap antiques and weird and wonderful bric-a-brac.

Held in Victoria Square from November 7 to December 23, Birmingham emulates its continental rivals with over 80 stalls selling everything from jewelry to handmade toys.

But the big draw is Chris Moose, the singing moose, found outside the market’s Council House entrance, lending things a distinctly British air.

What makes it special: The neighboring Christmas Craft Market, in Centenary Square, has about 30 stalls selling local beers, British sausages and work by local artisans.

Copenhagen’s Tivoli, with its fairground rides and warren of shops and stalls, is a year-round destination in its own right. But it’s during December that this Danish institution really comes into its own.

As well as the usual stands selling Christmas decorations and nibbles, there are three different light shows which take place in the park, as well as a traditional Pixie Band playing festive songs at various points around the site.

December 13 sees the annual Lucia procession, with 100 girls passing through the gardens carrying candles and singing to mark St Lucia’s Day. Christmas in Tivoli Gardens 2019 runs from November 16 to January 5.

What makes it special: Firework displays are held in the Tivoli Gardens between December 25 and 26 and again on December 31.

Berlin is a hugely popular destination during the festive season thanks to its Christmas markets.

The city has worked hard to renew its seasonal appeal in recent years after a terror attack at the Breitscheidplatz market in 2016 led to the temporary closure of many other markets in the capital.

While you could visit a different Berlin market for all 12 days of Christmas, if there’s only time for one, our pick is Gendarmenmarkt.

The imposing architecture of the Deutscher Dom and Französischer Dom loom over classic wooden huts where visitors can steel themselves before shopping with delicious sausages and warming cups of mulled wine.

Once fortified, vast crafts tents await where everything from original paintings to wood carvings can be found for sale. For off-kilter Christmas presents, it’s a struggle to match this gem.

What makes it special: Come for the first-rate shopping, but make sure to stick around for the nightly concerts, ranging from choral to jazz. No out-of-tune carols here.

Brussels’s Winter Wonders is more of a festival than a Christmas Market, although there’s more than 200 chalets serving up festive fixes of glühwein, Belgian beers and waffles.

The event is spread out across the Bourse, Place de la Monnaie, Grand Place, Place Sainte Catherine and Marche aux Poissons, with ice skating, a Ferris wheel, light shows and, of course, a huge Christmas tree.

Running from November 29 until January 5, it adds to the Belgian capital’s chocolate box feel.

What makes it special: There are guided tours in English for those who don’t know where to begin. Just make sure to warm up with a hot chocolate first.

Fira de Santa Llúcia dates all the way back to 1786. It began as a one-day event to celebrate the feast day of Santa Llúcia on December 13, but has since developed into a three-week Christmas fair.

Positioned in front of Barcelona Cathedral, the market features around 300 stalls selling everything from Christmas decorations, trees and nativity figurines to musical instruments, handmade puppets and jewelry.

The festivities usually begin in late November, running until around Christmas Eve.

What makes it special: The caga tio — an enormous piñata-style Christmas log which spills out candy and gifts when beaten with a stick — is one of the most popular Fira de Santa Llúcia activities.

The Budapest Christmas Fair and Winter Festival takes place at Vörösmarty Square in the center of the city from early November to the end of December each year. It’s the oldest festive market in the Hungarian capital as well as the most popular.

You can pick up anything from Christmas-themed gifts to traditional Hungarian food to mulled wine from the 100 plus stands on display. There’s also plenty of entertainment in the form of light shows, folk dancing and live music.

What makes it special: The exterior of the famous Gerbeaud Coffee House on Vörösmarty Square is converted into a giant advent calendar, with a new magical window display opening every day from December 1 to 23.

Skansen’s Christmas Market has been around since 1903.

Located in Skansen, an open-air museum on the island of Djurgarden in the heart of Stockholm, this Christmas market is about as traditional as it gets.

There are regular craft demonstrations as well as dancing games around the Christmas tree. You can also make your own decorations at a Christmas workshop.

What makes it special: Skansen is also home to a small zoo with Nordic animals, so you can combine your Christmas market shopping with some reindeer spotting.

Advent in Zagreb has been voted the most popular Christmas market destination.

There’s even an area dedicated to “fooling around”( or “fuliranje” where revelers can dance in the street and eat and drink to their heart’s content. This year’s event runs from November 30 to January 7.

What makes it special:

The Jolly Christmas Tram is tough to beat. Here kids (and big kids) can cruise through the city center accompanied by Santa and his elves.

This European-style open-air market in Bryant Park is one of the most well-known Christmas markets in New York. With around 125 custom-designed kiosks featuring jewelry and handicraft from all over the world, there’s plenty to keep visitors occupied.

Its park location means there are added bonuses like the impressive Josephine Shaw Lowell Fountain, which often freezes over in the winter, and the Le Carrousel, where riders are likely to be joined by Santa and his elves. The Winter Village opens on October 31.

Estonia’s capital goes all out at Christmas time, with this revered Christmas market at the center of the action.

Held each year in Tallinn’s Town Hall Square, it boasts rows of huts, where you can pick up traditional Estonian cuisine and handmade gifts.

There’s also a winter grotto to visit as well as performances by choirs, poets and dance troupes.

What makes it special: The main highlight here is the Christmas tree, which has been set up in the Town Hall Square since 1441 and was one of the first to be displayed in Europe.

Split into two different sections at Barfüsserplatz and Münsterplatz, Basel Christmas Market is in its 42nd year and remains as popular as ever.

This year’s official opening will take place at Münsterplatz on November 28, with Swiss politician Elisabeth Ackermann switching on the Christmas lights.

Consists of around 180 meticulously decorated stalls selling culinary delights and goods, the market is open until December 23.

Joe Minihane is a freelance travel writer. His new book “Floating: A Life Regained,” was published in May 2017.

When you use affiliate links on this page, CNN may receive revenue. CNN is not responsible for the goods or services provided through such links.

Watch how these showstopping #cookies are made. #satisfying
A 5,000-Year-Old Cheesemaking Tradition In Armenia
Antibiotics Use In Farm Animals Is Growing—Here’s Why It Could Pose A Danger To Humans
5 of the best hikes in Everglades National Park
In New Cookbook Dietitian Maya Feller Highlights Healthy Meals From Around The World