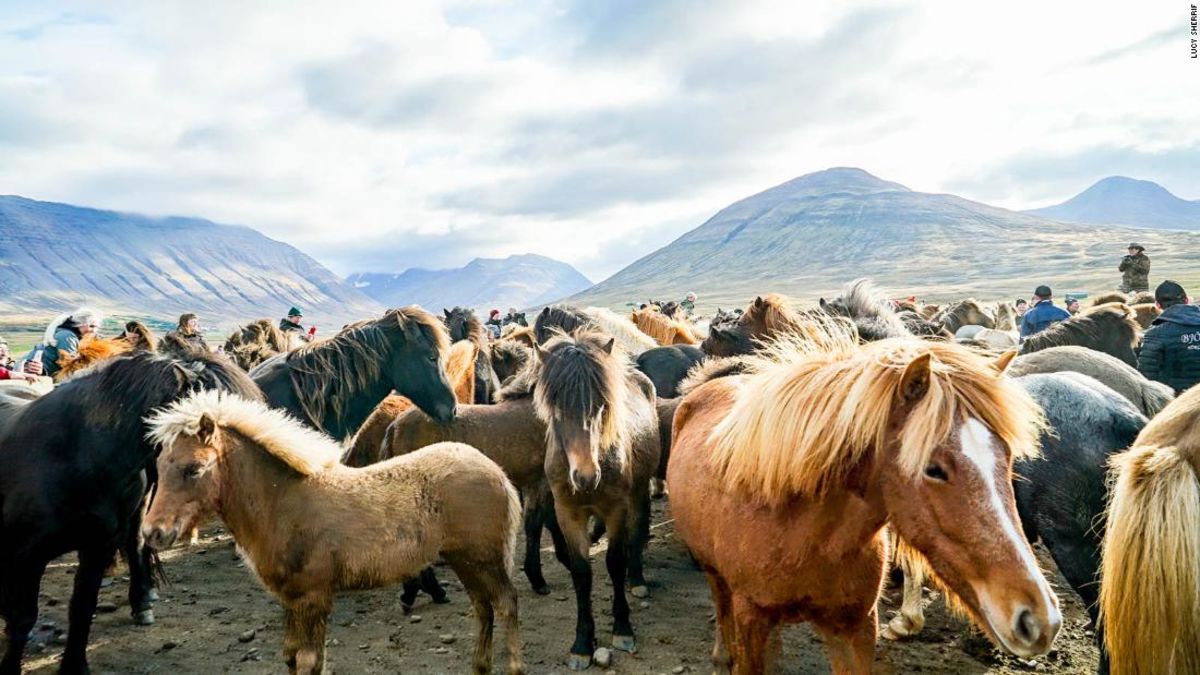 (CNN) — “It looks like the weather tomorrow will be good for us,” says Þórdís Anna Gylfadóttir as she studies the pink-hued sky. “When it’s a nice day, we have more people coming to the valley.”

The Hjaltadalur valley is quiet, with little to indicate that hundreds of horses, and thousands of people, will travel to this remote spot in the northern Skagafjörður region the following day to witness the biggest horse-herding event in Iceland’s calendar — the Laufskálarétt pony party.
And in Iceland, horse-herding is a big deal; the country has around 900,000 horses, one animal to every three people.

Iceland is fiercely protective of its horses, which are known across the world for their mild temperament, thick manes and hardiness.

The bloodline is protected by strict rules on bringing other horses and horse-riding gear into the country, meaning the Icelandic horses are purebred and have few diseases. Even the riding method is unique. There are five gaits: alongside the standard gallop, trot and walk there is tölt and flying pace, known as the “fifth gear.” Iceland’s riding school, Hólar University, is world-renowned.

Each year, horse farmers will put their geldings and female mares out to graze for the summer. The horses, which are purebred and were first brought to the island country in the 10th century, roam the mountains freely.

As the fall approaches, Iceland’s horse farmers bring their animals in for the winter.

Come September, when the temperature drops and the bitter Icelandic wind whips through the valleys, the horses are brought in for the winter.

The event is an excuse to party, with traditional dried harðfiskur fish, steaming meat soup, and plenty of Icelandic liquor passed around attendees, who roll up in minivans, SUVs and horse boxes to cart their four-legged steeds home, often up to 20 kilometers away.

The party continues at farms across the region well into the night, as well as at a local riding hall.

“It’s hard to get together, because everybody lives quite far away from each other,” says Þórdís, who owns 40 horses. “And so this has become a legendary weekend event. Even if you don’t have horses in this corral, you come down anyway because it’s just tradition. It’s the most well-known corral in Iceland.”

It’s the fifth time Sæunn Kristin, a kindergarten teacher, will be riding in the corral with her 25-year-old horse Tungl (“moon” in Icelandic).

“I don’t have any horses here but it is just the most amazing feeling to ride out and help bring the horses back. They are these wild animals and to see them being able to roam is beautiful. And the feeling of riding, it just makes you feel free.

Around 20 farmers are here this year to round up the 500-odd horses who are scattered across the mountains. But they’re joined by tourists from across Europe, who come to ride and help guide the horses across the river and up to the corral, where the animals are sorted into their respective farms.

“All the horses are microchipped,” explains Atli Már Traustason, who is overseeing this year’s corral. He’s a farmer and horse-breeder, and has his own horses to escort home to Syðri-Hofdalir, his farm.

“But each farmer knows his own horse, by name, by face. I know every one of my horses. I trained all of them from foal to grown up; I know all of their individual characters. But we also use branding, a tag on their ear, to identify them.”

Some farmers say they know their horses by name and face.

Before the sorting begins, the horses must be cajoled from their grazing terrain.

Riders, both farmers, Icelanders and tourists, set out at 12 p.m., to begin ushering the horses into one big group. Sat astride their horses, which have been kept over the summer to ride, the farmers wear black riding pants, thick coats, gloves and helmets to protect against the cold wind as they gallop across the plains herding the animals together.

Icelandic sheepdogs bark at the horses’ ankles as they expertly help their masters — and mistresses — round up the hundreds of horses and cross the river in unison.

Before the sorting begins, the horses are brought down from their grazing terrain.

The hundreds of horses are led up a thin dirt track in a line stretching nearly three kilometers until they reach the Laufskálarétt corral, where they are herded into a fenced-off field, before small groups are led to the middle pen. Concrete walls fan out from the center holding, each labeled with the name of the farm, creating a giant pie-shaped structure.

“All the farmers help each other out,” Atli continues. “You identify your horse, and then you work to round it into your pen.”

Shouts, whistles, neighs and whinnies echo across the valley, as each horse is sorted, some more easily than others. In the past, farmers would have to leap onto a difficult horse’s back to steer it into a pen, and injuries weren’t uncommon. Around 15 years ago, the farmers came together to devise a strategy to make the process smoother.

Atli, who is wearing an earpiece, says, “It’s much better now. And, of course, now we have technology. We wanted to find a way to protect people and horses, and so now we have small groups to get each horse into the right farm pen.” The horse’s microchip is scanned via a phone app into a national horse database, so there are no mix-ups.

As the farmers are hard at work, a group of flat cap-wearing men, dressed in traditional woolen sweaters, have gathered in a circle adjacent to the pen and are singing traditional Icelandic songs.

Viking beers in hand, the group swells as more join in and soon the operatics drown out the horses. Some of the horse boxes have been turned into makeshift cafes, complete with picnic benches, dishing out steaming coffee, rye bread and soup to the crowds who are huddled inside to keep warm and catch up.

The corral is an important part of the social calendar in the region.

Over the past years, the corral has become more popular among tourists. Annabelle Loch flew from Niedernhausen in Germany specifically to ride in the event.

“My friend told me about the roundup and I found a farm that offered to take tourists to participate. I’ve never seen so many horses in one place, and it was amazing to see all the different colored horses riding across the river. I couldn’t believe how close they were running to us too.”

She adds: “It was also interesting to see how much the Icelandic people could drink without falling off their horses.”

Horses are part and parcel of the Icelandic way of life, particularly here in the remote north.

“It’s a tradition here in Skagafjörður to own horses,” Atli points out. “Most people here have at least 10 horses. It’s actually more unique if you don’t own a horse.”

By 3.30 p.m., the center of the corral pen is empty. “Every horse has been accounted for,” Atli reports. “And nobody is missing a horse.”

Now, the party can really begin.