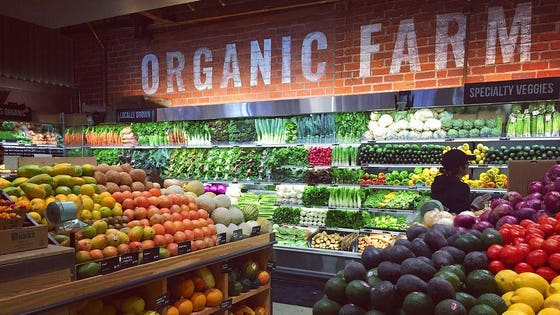 While grocers nationwide have largely been struggling to revive their stores, Los Angeles-based organic grocer and cafe Erewhon has been growing more than 35% year-on-year since 2016. There’s momentum inside existing stores, with same-store sales growth topping 15% recently, as well as renewed demand for new locations. Erewhon’s fifth location in Palisades Village opened in June while another outpost slated for Silverlake is in progress.

But Erewhon still doesn’t exist outside Southern California, despite its success in an otherwise tough market, on top of a cult following of customers and celebrities that extends far beyond the West Coast.

A new deal with New York-based growth equity firm Stripes Group will change that. Stripes, an early backer of Seamless that recently invested in Levain Bakery, now owns a substantial minority stake in Erewhon. The investment will go toward opening more stores south of Los Angeles in Orange County while also bringing the chain to Northern California for the first time. A big launch in New York City could come in a few years.

“Erewhon can become a national brand and universally the most trusted in better-for-you food, period,” says Stripes founder Ken Fox. “Every metric you would measure this business on is an outlier in a few different industries: specialty restaurants, traditional retail and grocery. Any kind of four-wall experience you have, you would be hard-pressed to find store economics that look anything like Erewhon.”

Founded in Boston in 1966 and transplanted to Los Angeles three years later, Erewhon has pioneered the organic foods movement since its early days. But it hasn’t always been such a hot business. Until current owners Tony and Josephine Antoci purchased it in 2011, it never expanded past its first location on Beverly Boulevard.

The Antocis acquired the company because they were on the hunt for a second act. Tony and Josephine had spent years running food distribution business Superior Anhausner Foods before they sold it to Sysco in 2009. Bored in six months with a non-compete hanging over Tony’s head, he turned to the grocery industry because he knew how food service worked but didn’t want to open a restaurant given that so many fail.

During trips to New York, the couple always enjoyed perusing the specialty purveyor Dean & DeLuca, and they briefly attempted to bring the brand to the West Coast through a license deal. When that became too costly, they pivoted, thinking they might start a rival concept, but they ended up purchasing Erewhon instead.

“The goal has always been to grow slowly and make sure that we stick to what we do right,” CEO Tony Antoci said during a recent visit to New York, over breakfast at Hudson Yard’s Equinox Hotel. “We don’t believe in debt, and the business supports itself.”

With Tony heading up operations and Josephine focusing on the products, they overhauled the store’s merchandise and purchasing. They also significantly expanded the prepared foods business, which now makes up more than 40% of sales, according to the company, which declined to disclose revenue.

Erewhon has seen double-digit growth each year that the Antocis have been owners, Tony says. Sales have increased tenfold since the 2011 acquisition. So many loyal customers now come in daily for a meal that Erewhon makes $2,500 per square foot, making it more than four times as productive as most other grocery stores. To capitalize on this further, Erewhon recently launched delivery on Instacart for grocery items and Postmates for prepared meals.

“We realized pretty quickly that food service was going to be the driving force behind the business,” Tony Antoci says. “Oddly enough, I didn’t want to open a restaurant, but I’m glad to say I don’t have a restaurant.”

Erewhon has taken chances on countless food entrepreneurs like billionaire GT Dave over the years, giving founders their first shelf spaces, along with the opportunity to hand out samples in-store and hear feedback from potential customers. Whole Foods Market became known for doing the same over the years, on a much bigger scale. But with Whole Foods having ended its in-store demo program and changed how it brings on smaller, regional brands after Amazon acquired it in 2017, Tony Antoci says there’s an opportunity for Erewhon to become an even bigger destination for mom-and-pop producers. Antoci will continue to push for new brands to launch exclusively at Erewhon, he adds, like the highly anticipated line of canned drinks from cafe startup Cha Cha Matcha, which were unveiled across stores in September.

“If you want to get into any other retail stores, it takes so long,” says president Josephine Antoci. “We’re very strict with what we carry. Founders know if they can launch it with us, it will be really successful.”

11 incredible places to celebrate the spring equinox in 2023
Antibiotics Use In Farm Animals Is Growing—Here’s Why It Could Pose A Danger To Humans
Can you tell the difference between Port wine and red wine? #InsiderFood #wine #portwine #alcohol
Not a fan of cruising? The hack that could change your mind
Manhattan vs Brooklyn: which New York City borough will fit your travel vibe?