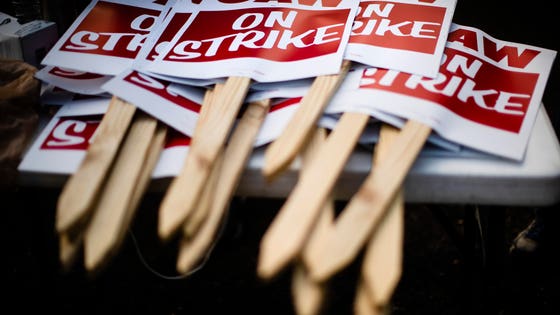 The United Auto Workers strike at General Motors plants is now three weeks old. Union members are beginning to see their strike pay, but many are also getting help with meals.

Restaurants, food banks and fellow union members are stepping up to help feed workers who are off the job.

In that time, GM has hired a number of workers earning lower wages and less-generous benefits than veteran workers, known as “two-tier” workers, and about seven percent of its workers hold temporary positions.

Those newer and temporary workers may be feeling more of a pinch than veteran workers, who earn the highest rates at GM, which helps explain why the assistance is being made available.

In the Detroit area, striking UAW members are being offered discounts at Olga’s Kitchen, a chain of fast casual restaurants focusing on Mediterranean specialties.

The Yale Hotel, in Yale, Michigan, is offering free meals to striking UAW members and their families on Thursday nights.

Last week, the special was a chili and nacho bar, and the previous week, it was chicken and noodles.

“We made lots!” the hotel declared on its Facebook page.

The Yale Hotel is about 50 miles from Flint, where GM workers are on strike at several facilities. Some workers commute to their plants from the small Michigan town.

The hotel manager, Shelley O’Brien, is the daughter of a firefighter and remembers his efforts negotiating contracts through his union.

“Not having enough money to feed your family seems to me like it might keep someone from striking and properly being able to advocate for themselves,” she told the Port Huron Times Herald. “This is just a little nod towards that.”

In Flint, offers include one from the local outlet of Wahlburgers, the hamburger chain from actor Mark Wahlburg, which opened last June.

It is offering 50 percent discounts to UAW members who purchase a sandwich, a side dish and a drink, while there also are deals from movie theaters, a brew pub and even an attorney.

Other union locals are pitching in to help food drives for the striking GM workers.

UAW Local 2000, which represents Ford workers at the Ohio Assembly Plant in Avon Lake, Ohio, asked its members to support a food pantry for striking members of UAW Local 1005, in Parma, Ohio.

The offers echo the assistance provided to laid off government workers during the shutdown last December and January, as well as the food kitchens that were established in Puerto Rico and Houston after devastating hurricanes struck those places.