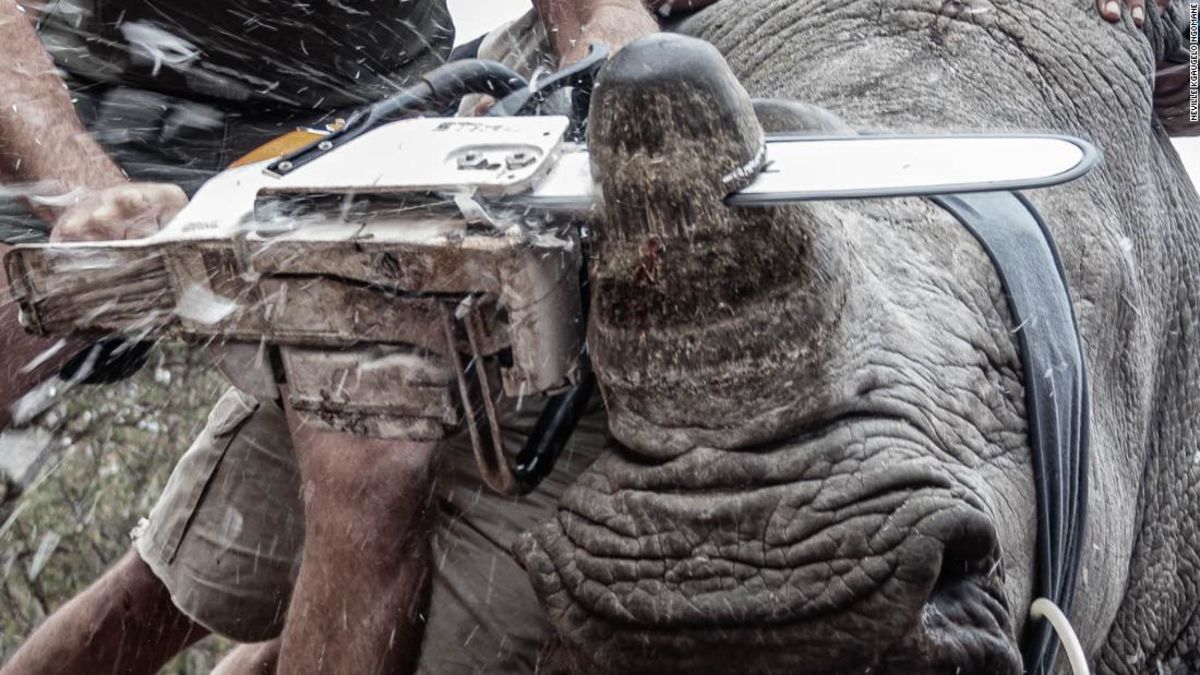 (CNN) — It’s a shocking image: A huge rhinoceros pinned to the ground while a grimacing man shreds a power saw through its horn, white shards shooting off in a blur of high speed.

The photograph, taken by 20-year-old student Neville Kgaugelo Ngomane, shows the radical lengths that are now being taken to protect vulnerable rhinos from the poachers who hunt them down for their horns.

Though it seems cruel, this is now a standard practice in some parts of Africa to keep rhinos alive. Robbed of the horns that fetch high prices in illegal trade, the rhinos will be left alone.

Neville Kgaugelo Ngomane’s winning photo. A rhino being dehorned in an attempt to protect it from being poached

Ngomane, born in Mpumalanga, in eastern South Africa, said the rhino dehorning was “not easy to watch,” but he hopes the graphic image will contribute to the preservation of these powerful beasts.

“I wanted to use the photo to show people that they should stop poaching, to be aware of its dangers,” he says. “And I became so excited when I heard that I had won. To be picked among more than 4000 entries, it is a big deal.”

As a child, Ngomane spent a lot of his time watching documentaries about wildlife conservation.

He learned to use a camera in 2014 by watching tutorials online but says he could not capture wildlife because he did not have money to pay to get into the national parks where the animals roam freely.

“When I was in the ninth grade, one of my teachers brought a camera to school and he used to let me take it home for the weekend,” he said.

“But it was hard for me to photograph wildlife because I had no money to pay to go to the reserves. So, I just settled for taking pictures of events,” he added.

Things changed for Ngomane in 2017 when he stumbled on Wild Shots Outreach, a not-for-profit organization with a focus on teaching photography.

Based in Hoedspruit, north of South Africa, Wild Shots Outreach trains students and unemployed youths from disadvantaged communities to photograph wildlife and the environment.

“I saw some of their works on Facebook so I started sending messages like every three weeks,” Ngomane said. “I wanted the founder to come to my school to teach us how to photograph wildlife.”

Mike Kendrick, director of Wild Shots Outreach met with a school group led by Ngomane in 2018 and taught them to shoot videos and stilt photos for free.

“Sometimes I find young people within the school groups who have a real passion and talent for photography, and I am able to give them a second-hand camera,” Kendrick told CNN.

“I was able to give him (Ngomane) a camera that works well, which is the one he used to take that photo of the rhino dehorning,” he added.

In partnership with Canon South Africa, Kendrick was also able to get experts from Canon to give Ngomane’s group advanced training on how to take complex shots.

Ngomane says meeting Kendrick allowed him to visit the parks and wildlife reserves he missed out on as a child.

According to him, he has now taken hundreds of animal photos. “At first I didn’t want to share my photos but Mr. Mike encouraged me to. That’s how I registered for the competition and won too,” he said.

Ngomane has also learned how to edit videos. He plans to shoot documentaries on the need for wildlife conservation.

“I want to get outside, be in the busy anywhere in Africa. I want to keep on taking pictures and making videos that show environmental awareness,” he said.

Ilegal Launches A Rare Aged Mezcal
An expert guide to ski holidays in Vail
Ugly Tourists in Paris – How Tourists Annoy the Locals in Paris
Japanese Sukiyaki – INSANELY MARBLED BEEF – Traditional 100 Year-Old Food in Tokyo, Japan!
How to get around in Switzerland