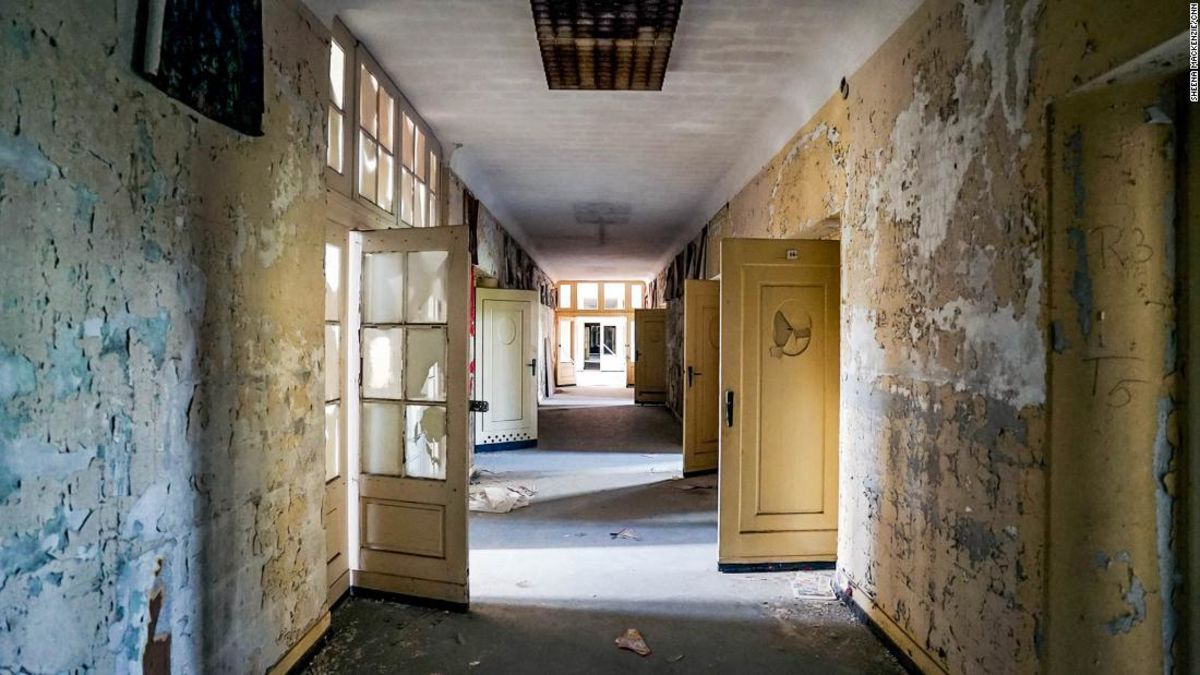 The abandoned military complex — known as the Forbidden City — sits behind a hefty padlocked gate in the quiet neighborhood of Wünsdorf. It has been empty since the last remaining Russian soldiers left 25 years ago, following the fall of the Iron Curtain.

It wasn’t always like this. The site was once home to around 40,000 Soviet soldiers, earning it the nickname “Little Moscow in East Germany,” says tour guide Werner Borchert.

A statue of Lenin keeps guard at the entrance of the former military complex.

Some 500,000 Soviet troops were stationed across the German Democratic Republic — otherwise known as East Germany — during the Cold War, and this sprawling military base hidden in the woods was their headquarters.

“It was filled with schools, shops,” says Borchert, 67, a cigarette perpetually hanging from his lips.

Store shelves were lined with “Soviet products, Soviet magazines,” he says. And all encased behind a 17 kilometer wall, just over an hour’s drive from the capital Berlin.

Despite familiar goods from the motherland, life was heavily restricted for soldiers who were stationed here two to three years at a time.

There were “no vacations, no visits from girlfriends or family,” says Borchert. Though there were daily trains running to and from the Soviet capital.

Inside the vast corriders of the main officers’ building.

For the higher-ranking officers and their accompanying wives and children, it was a different story. They were stationed here for up to 12 years and enjoyed the more luxurious parts of the military base, like its grand pool and theater.

When the last Soviet personnel left in the 1990s, the site remained empty — except for the local teenagers who used it as a drinking spot, says Borchert, pointing at the odd empty bottle or graffiti.

Today the painted murals of Communist heroes are peeling from the walls. Weeds sprout from rotten windowsills. And mold creeps across rooms that once saw some of the most important military decisions in the country’s history.

The military base was inaugurated at the turn of the 20th century — and has boasted a hefty line-up of residents over the years.

A high-ceilinged room with a crumbling stage was once a dining hall for World War I officers, explains Borchert.

Years later, the same room was transformed into a casino for the Nazis. And most recently it was used as a concert hall for Soviet officers and their families.

Walk along the garden paths overgrown with weeds and you’ll come to the swimming pool, today eerily empty of water, its lane-dividers still hanging in mid-air.

An eerily empty pool at the abandoned military site.

Here, officers would watch Bolshoi theater, ballet and choirs that were sent over from Moscow, says Borchert, his cigarette smoke twirling in the half-lit theater.

For local East Germans living outside its walls, this was a “forbidden place,” remembers Michaela Schreiber, who grew up in the city of Zossen, where the base is located.

The theater where Soviet officers once enjoyed entertainment from the motherland.

”Only a few selected GDR citizens were allowed to enter,” says Schreiber, who this September ended a 16-year stint as the city’s mayor. “Usually it was just those who worked there and they had to carry their work permit.

“A few friendships between those select people and the Russian military could develop. But everyone else was literally cut off.”

‘They had to leave quickly’

When the Berlin Wall finally did come crashing down in 1989, the Soviet soldiers living in Wünsdorf watched it all on TV.

The last Russian troops left the military complex in 1994. Zossen’s mayor at the time, Werner Lesse, remembers the soldiers “had to leave quickly.”

A painted walkway at the abandoned military base.

After they left, Werner and other German locals were for the first time able to look inside the mysterious barracks.

“We saw that some still had lunch on their tables,” he says. “The Russian soldiers and officers with their families knew they would have to leave, but a precise time was not scheduled.”

After years living on the site, they were given just 12 hours notice, he says. “We found abandoned pets — cats, dogs,” he adds.

A new generation of visitors

Today the site is operated by development company EWZ, with funding from the local government.

Another 700 residential units are set to be reconstructed or built on the site in the coming years, she adds.

A brilliant painted mural of communist heroes inside the empty building.

The grand lemon-colored officer’s building, meanwhile, is still waiting for a buyer.

They come to see a ghostly reminder of “Little Moscow” in the German woods, retracing the footsteps of its famous inhabitants.

Amsterdam: Only Red Lights & Weed?
Ntsiki Biyela, Founder Of Aslina Wines And One Of South Africa’s Young And Very Talented Winemakers
A Family Wine Estate Lost While Dealing With Father’s Alzheimer’s
Austin’s top 6 neighborhoods for staying close to the action
Downward Dog with dogs: Do yoga with animals at these 10 hotels and retreats