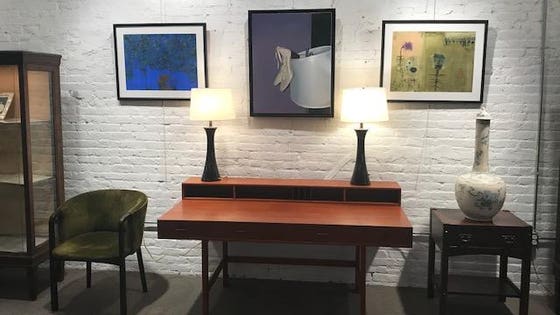 Compared to other celebrity auctions, the New York preview for the sale of items belonging to chef, author and TV travel host Anthony Bourdain, who died last year at the age of 61, was a low-key affair. In a showroom in Harlem, inside a modest building fronted with a red awning advertising Big Apple Mini Storage, a row of Bourdain’s blazers, suits and jackets hung on a free-standing clothing rack and piles of his books were stacked on furniture around the room.

The sale of over 200 lots from Bourdain’s personal collection includes many everyday items, including his couch, bed, bookcases, TV cabinet, novels and DVD collection, that would be unremarkable, had they not belonged to someone who had such a profound impact on food and travel journalism. Or as Tim Ryan, president of his alma mater, The Culinary Institute of America, describes Bourdain, “possibly the most recognizable food personality on the planet”.

There are also some standout items, including his prized custom Bill Kramer steel and meteorite chef’s knife (estimate $4000 to $6000), his chef’s jacket (estimate $200 to $400), and many of his early writing manuscripts, in his signature unvarnished style, going back to high school.

One manuscript describes a visit to a methadone clinic; another lot includes a handwritten note from 1973, written by Bourdain when he was stuck outside Nice train station in the south of France. “Amazing. The body so lost, so goddam lost and the brain still functions,” it begins. “After isolation, disease, drink, overtiredness and boredom the old bean still works. Here I sit, locked out of the train station at 1am, alone.”

There is also the original typed manuscript of his 1995 crime novel Bone in the Throat (estimate $700 to $1000) and one lot that includes the original idea for his 2000 memoir Kitchen Confidential (estimate $300 to $500). Another highlight is Bourdain’s midcentury Peter Lovig Neilsen teak flip-top writing desk (estimate $800 to $1200), which like much of the furniture in the auction, Bourdain purchased in 2016.

Forty percent of the hammer price of the sale, which is expected to fetch $200,000 to $400,000, will be donated to a new scholarship in Bourdain’s name at The Culinary Institute of America for students who want to study abroad or take part in the college’s other international programs. The rest of the proceeds will go to Bourdain’s family.

All the lots for sale carry reasonable estimates to encourage Bourdain fans to support a good cause. For example, if you want Bourdain’s Vinyl Figure of Monster Kaiju Guilala from the movie The X from Outer Space, it could be yours from between $30 and $60.

A tall blue and white ceramic vase, bought on Bourdain’s first trip to Vietnam nearly 20 years ago, before he knew he would ever make it back to the country, has an estimate of $250 to $450. Eventually, Bourdain visited Vietnam multiple times over his life, most famously to drink beer and slurp noodles with President Barack Obama in Hanoi for a 2016 episode of Parts Unknown.

Other items collected during Bourdain’s travels include gifts presented to him by a Mbole tribal chief during a Parts Unknown shoot in the Congo, a country he had been unable to film in for many years because of security concerns. One of these is a carved and wood metal ritual figure (estimate $500 to $800). “He always treated items presented to him on his travels with real reverence and going to the Congo was a holy grail for him,” says Laurie Woolever, Bourdain’s long-time assistant and biographer, whose biography of Bourdain is likely to be published in 2021.

Of the art works belonging to Bourdain, there are two watercolors by Manhattan artist John Lurie, who featured in the very last episode of Parts Unknown, where Lurie cooked Bourdain eggs at his home. The Sky is Falling, I am Learning to Live with It and This Party Sucks, both estimated at $1000 to $2000, were purchased by Bourdain soon before he died.

There is a collection of works from Canadian painter Brad Phillips, including a number of still lives, and satirical prints The Brain of Hunter S. Thompson (estimate $600 to $800) and Rats in the Kitchen (estimate $300 to $500) by illustrator Ralph Steadman, who eventually produced the cover art for Bourdain’s 2016 cookbook Appetites.

The auction has already attracted a lot of interest from potential buyers. “People have been contacting us since the day we announced the sale. We have had requests for shipping quotes for the desk from Europe,” says Niki Tiliakos, specialist at Lark Mason Associates, which is running the sale. “Someone even told us they’re going to fly in from LA to see these items.”

The auction begins online today at www.igavelauctions.com and ends on October 30.