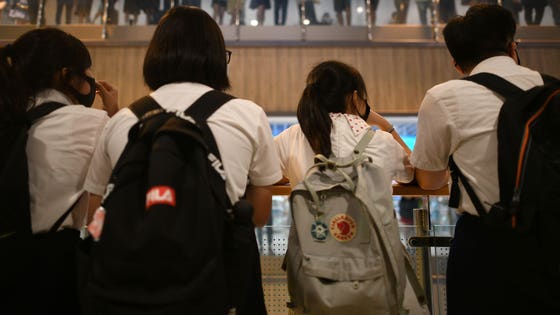 Learning how teens spend has been a years-long exercise for retailers as their likes and dislikes can decide the fate of a brand or a season. And cracking the code on today’s teens, dubbed digital natives, is no exception.

As retailers gear up for the industry’s critical holiday sales, a latest reading on teens may offer some cause for worry: Teens, or known as Gen Z, have lowered their self-reported annual spending by 4% to $2,400 from a year earlier, the lowest level in eight years, according to investment bank Piper Jaffray’s semi-annual Taking Stock With Teens fall survey released Tuesday.

One culprit: about a third of the teens, up from a quarter a year earlier, said they believe the economy is getting worse, according to the survey, which polled 9,500 teens across 42 U.S. states with an average age of 15.8 years.

But that’s not the only driver. Female teens’ spending on handbags has hit a new low of $90 a year in the 38th semi-annual survey’s history, less than half of the record $197 reported in the spring 2006 survey. Cosmetics spending also declined more than 20% to $106 from a year earlier.

Overall, the survey’s results echoed other findings associated with today’s teens. For instance, they care about social and political issues including global warming, immigration and gun control. To do their part for the environment, nearly half of the teens said they are changing their habits including using more metal straws, recycling more and using less plastic.

Here are other takeaways:

The preppy-style teen uniform is out: Mirroring fashion brands’ performance scorecards, the survey showed athletic labels dominate teens’ top fashion preferences. Lululemon hit a new all-time survey high as the No. 7 preferred apparel brand, and catapulted to No. 2 among upper-income female teens. Nike, whose stock recently jumped to a record high after posting better-than-expected results, remained the No. 1 shoe and clothing label for teens.

“The casualization of fashion continues,” according to the 70-page study, adding preppy brands including Ralph Lauren, Sperry and Vineyard Vines continue to lose teen apparel share to athletic labels. Teen fast-fashion label Forever 21, which recently filed for bankruptcy protection, also has lost favor with teens. Its favorite apparel brand share among teens declined 2 percentage points to 3% the past year.

Accessible luxury handbags are losing favor: As handbag spending hit a new survey-low, Michael Kors, Kate Spade and Coach saw their combined favorite-brand share among female teens decline to 49% from 57% last year. Michael Kors, while still No. 1, saw its share slump to 27% this fall from 36% in spring 2018.

European luxury brands including Louis Vuitton and Gucci, on the other hand, picked up mindshare among teens, thanks partly to online resale platforms including The RealReal and StockX that give them “access to luxury for less,” according to the report.

Food takes the biggest chunk of teens’ wallet share: Food has continued to outpace clothing as the biggest spending category for teens, the study showed. For instance, restaurants represented 23% of spending among upper-income teens in the most recent survey, topping clothing at 21%.

Their favorite restaurant? Chic-Fil-A chicken sandwich chain, followed by Starbucks and McDonald’s in the top five for both upper-income and average- income households. Other fast casual and fast food service chains Chipotle, Dunkin’ Donuts, and Taco Bell rounded out the top five list for either of the income groups. Olive Garden is the only full-service chain making the top five list.

Amazon is cultivating a bigger teen following: 52% of teens vote Amazon as their favorite ecommerce site, up from 47% a year earlier. In contrast, Nike, in second place, trailed far behind with a 4% mind share.

Amazon’s major rival eBay, No. 5 with a 2% share, “continues to face mindshare challenges with teens,” according to the study. Amazon’s major brick-and-mortar rivals Walmart and Target didn’t make the top 10 list. In another sign of Amazon’s growing popularity with teens, it’s become the No. 5 favorite beauty-shopping destination for them, up from No. 17 a year earlier, according to the survey.

“Amazon remains well positioned to take share of overall retail sales and having the support of the teen (demographic) is critical,” the study said.

Amazon isn’t just winning teens from the upper-income household bracket. As Amazon Prime adoption rate among teens rose to 78% from 74% a year earlier, the study found the growth was led by teens from the lowest household-income bracket of between $21,000 and $41,000.

Related on Forbes: Don’t be surprised if your holiday gifts come unwrapped this year

Related on Forbes: Healthcare may eventually become a bigger business for Best Buy