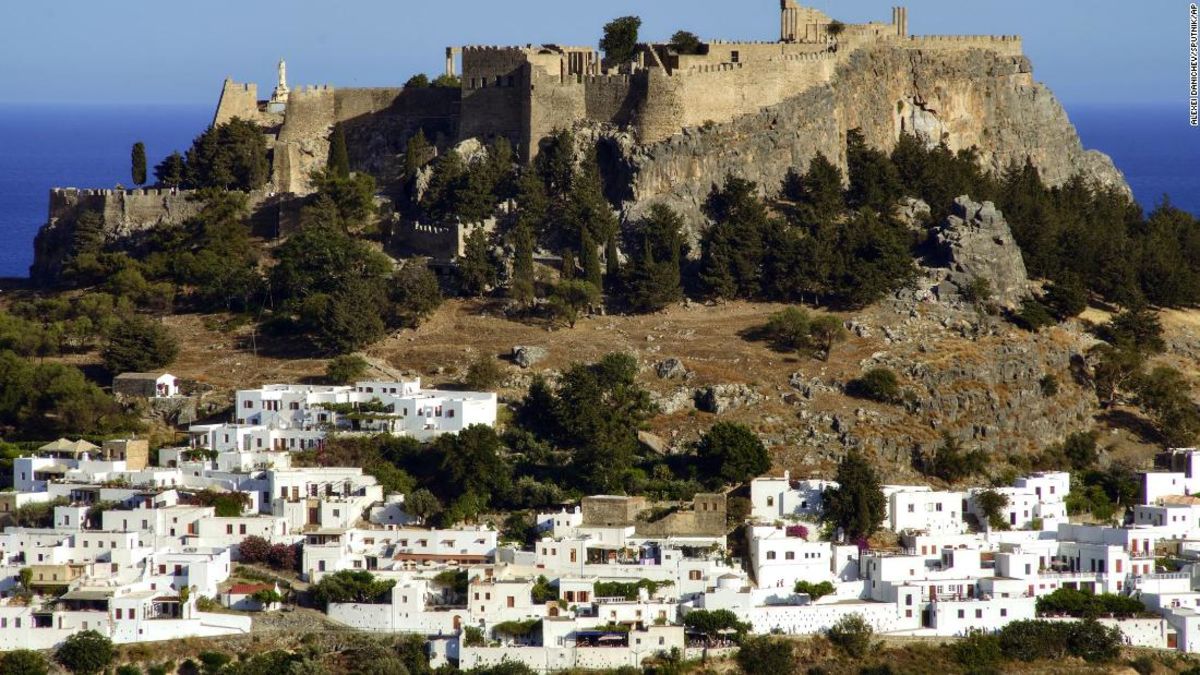 Along with Dimitsana and Andritsaina, Stemnitsa is one of three villages in mountainous Arcadia that once exemplified the Peloponnesian pastoral idyll.

What makes Stemnitsa stand out, though, is the Silver and Gold Smithery School.

Not only does it bring a bustling student community during term time, it also generates an abundance of handcrafted jewelry in workshops scattered along its narrow lanes.

Mount Pelion in Thessaly is home to some of the most picturesque villages in Greece, none of them more so than Agios Georgios Nilias.

Set at an elevation of 700 meters, it’s a place where old schist-stone houses with four-pitched roofs rise next to 19th-century neoclassical mansions.

The latter belonged to merchants who emigrated to Alexandria in Egypt and made their fortunes in cotton and textiles, before returning to their villages to build impressive summer residences.

Today, the remaining inhabitants often congregate in the village square, the center of life in every Pelion village, under the shade of three plane trees.

Visitors come here to enjoy the balmy evenings and dine on dishes that make use of obscure aromatic herbs foraged in the forest.

Arnea is known for its pretty traditional villages.

Arnea is perhaps one of the most typical of all traditional villages in Greek Macedonia.

Built at an altitude of 1,800 feet on thickly forested Mount Holomondas, it’s filled with two and three-storied wood-and-stone houses with low doors to keep the heat in during bitterly cold winters, as well as unique “hayat” protrusions.

These are not open balconies as you might find in southern Greece, but closed overhanging rooms that increase the interior footprint of the upper floors.

Brought in by the Ottomans and enthusiastically adopted in the colder regions of Greece, they led to a distinctive architecture typified by Arnea.

Positioned on a hilltop overlooking the island’s capital Ermoupoli, the village of Ano Syros is a classical Cycladic medieval settlement.

Its population is overwhelmingly Catholic Greeks who are descendants of Venetian settlers who arrived here in the late Middle Ages.

Although the streets here are full of the familiar Cycladic whitewashed houses and narrow cobbled alleys, its monastery belongs to the Capuchin friars.

The priests are clean-shaven, the churches feature no icons, only statues of St. Francis or St. Benedict, while the handouts on the pews are Greek translations of papal speeches.

In the spirit of good neighborliness, residents celebrate Easter according to the Orthodox calendar, by special dispensation from the Vatican.

Known as the “painted village,” Pyrgi belongs to the “mastichochoria” — 24 medieval villages in Southern Chios where the aromatic resin of the mastic tree is cultivated.

The homes in Chios are decorated with grey-and-white geometric sgraffito decorations called “xysta.”

Pyrgi is the best place to appreciate them: There’s barely a wall that’s not been covered with some abstract designs.

The contrast between these monochromatic patterns and the colorful potted plants and creeping bougainvilleas is both a walker’s delight and a photographer’s dream.

Oia is one of the most recognized places in Santorini.

Yes, Oia is expensive, overhyped and overcrowded, but for good reason.

This picturesque coastal village is undoubtedly the most celebrated spot in Santorini — if not Greece.

Images of almost every alley corner here have been shared so many times, they’ve shaped most people’s idea of what a Greek island should look like.

Oia’s enduring popularity means it attracts huge groups of tourists lured by the charm of its whitewashed houses with blue doors, the precipitous views over the volcanic caldera and the sheer vertical drop along the central walkway.

To avoid the crowds, it’s best to come early in the morning, before the tour buses arrive, or late in the evening after the sunset-watchers have disappeared.

Litochoro is a favorite with hikers due to its position at the entrance to Mount Olympus.

The location of a village can sometimes prove more important than its character, and this is certainly the case when it comes to Litochoro, with its celebrated views of Mount Olympus.

With its chalet-like buildings, wide streets and streams, it has the well-ordered, tidy vibe of a Swiss village. And yet, the smell in its main square is of souvlaki.

Litochoro is also one of the departure points for the 9,577-feet-high peak of Mount Olympus, or the “abode of the gods.”

Lindos is renowned for its ancient clifftop acropolis.

During the climbing season, the two-day trek to its 9,577-foot-high peak is mostly dry and sunny.

Huddled under the ruins of an ancient acropolis, Lindos is a Greek village that should be on every traveler’s bucket list.

With its car-free streets, sandy beaches and clear waters, and pathways so steep that beasts of burden are still used to negotiate them, it’s easily one of the most idyllic places in Greece.

But word has leaked out and the summer crowds can be a turn off.

The only solution is to stay the night and head out outside the early afternoon tourist rush hour, when it’s usually possible to roam the village calmly, climb the ruins unhurriedly, and swim in the coves unencumbered.

Picking out the most beautiful capital in the Cyclades — every single one of them called “Chora” on each island — is a difficult task.

This choice will inevitably depend on individual taste and past personal experience.

Putting all of that side, the Chora of Folegandros claims the most photographed lane in the Aegean.

Easy to stumble into, the unnamed lane summarizes the charm of a village in which houses are wedged close together to avoid the marauding pirates of olden days, yet there’s still enough space for several lively squares.

There’s no better example of an Ionian fishing harbor than Kefalonia’s Assos.

Built among pines and cypresses on the craggy hillside of a jutting peninsula, the secluded village is part of the municipal unit Erisos.

Not only is it picture perfect, with its vividly painted houses clashing with its lush green foliage and blue waters. It’s situated close to Myrtos, which is arguably Kefalonia’s finest sandy beach.

To top it all, the village is overlooked by the ruins of an atmospheric 16th-century Venetian castle that features superb sunset views.

This mountainous village in the island of Naxos is as picturesque as it gets.

Naxos is the largest and the greenest of the Cyclades, with a mountain range that rises up to 3,000 feet.

Measuring around the same size as Barbados, it’s home to several Cycladic mountain villages — an apparent contradiction in terms — but Apiranthos, built on the slopes of Mount Fanari, is the jewel in their crown.

Its main serpentine thoroughfare features tall stone houses, marble street slabs and impressive inland views that miss out the sea for a change.

Based in the Pindos mountains, Papingo is made up of impressive stone architecture.

The gateway to the stunning Vikos Gorge in the Pindos mountains, Papingo is one of the 46 highland villages known as “Zagorochoria.”

While its harsh mountain life led to mass emigration, the villages’ scions include US presidential nominee Michael Dukakis.

Interconnected by arched stone bridges and crisscrossed by mule tracks, the Zagorochoria are located in the middle of an area of outstanding natural beauty — Greece’s prime alpine tourist region.

Papingo is particularly popular, partly due to the “kolimbithres,” huge granite rock formations naturally sculpted to create small pools, located within a short walking distance of the village.

Hikers heading to the nearby Vikos Gorge often go for a dip in the pools, which resemble baptismal fonts, to cool down in the summer.

The mountainous village of Kalarites in Ioannina, the capital of Epirus.

Unlike other mountain villages in Greece, the village lies in the middle of steppe-like grasslands perfect for the prevailing shepherding culture.

Its inhabitants are mainly Vlachs, an ethnic group native to the southern Balkans who still speak a Latin-sounding language.

In fact, the name Kalarites itself means “horsemen” or “horse riders” and has the same root as “caballeros.”

As its livestock attracts and sustains predators, Tzoumerka is a region of Greece where you might spot bears and wolves that roam wild.

Fishing boats in the charming village of Gytheio.

Although it’s more of a grownup seaside town nowadays, the attractive port of Gytheio still exudes a village atmosphere and charm, especially around its 19th-century waterfront.

The small harbor is joined through a jetty to the pine-clad islet of Marathonisi where, according to legend, Paris and Helen of Troy spent their first night after eloping from Sparta.

It’s hard to choose between the views from Marathonisi to the mainland or vice versa, but the stroll around the waterside with its colorful fishing boats, solitary chapels and neoclassical facades is one of the most photogenic in Greece.

Katastari is based at the foot of the Vrachionas mountain.

This is mainly because it lies around one and a half miles inland from beach resort Alykes, which attracts the package deal crowds.

As such, Katastari, built among olive groves and vineyards at the feet of Mount Vrachionas, is worth a visit, if only for observing the day-to-day Ionian village life undistracted by mass tourist trappings.

The twin-belfried Church of the Virgin Mary, far too big for such a small settlement, and the sweeping pelagic views from the monastery of St. John the Baptist are particular stand outs.

It’s not often you’ll find an abandoned Hellenistic-era marble sarcophagus used as a flower bed, but at least three adorn the lanes of Kastro.

This is one of many striking details about the pretty clifftop village set on the Aegean island of Sifnos.

Like many islanders, Sifniots were regularly raided by pirates.

However, the shape of Kastro, named after the castle that once stood here, created a strong defense.

The eastern side of the village, which was fortified by the Venetians in the 13th century, borders a steep, unassailable cliff.

Meanwhile, on the inland side the outermost houses are built adjoining each other, thus forming a continuous barricade as good as a castle’s curtain wall.

Although you can spot similar building arrangements all over the Aegean, nowhere has it survived so pleasingly as here.

Archanes is crammed with restored houses and quaint squares.

Located around 16 kilometers south of Heraklion, Archanes is considered one of the best restored villages in Greece.

The pale gray-green of its surrounding olive groves contrast wonderfully with the flamboyancy of its low-rise houses, creating a vibrant scene.

White Aegean chic doesn’t suit the Archanians, if the salmon pink, terracotta red and yolk yellow walls, brown wooden doors and blue or green window shutters embroidered by dashes of purple bougainvillea are anything to go by.

It’s no coincidence that in such an artsy environment, you’ll find sculpture workshops and two folkloric museums.

When you use affiliate links on this page, CNN may receive revenue. CNN is not responsible for the goods or services provided through such links.

Romantic Southern California Valentine Getaway Specials
11 Surprising Chemicals Used In Domino’s, Taco Bell, and Other Fast Foods | Food Wars
Issues Travelers to Europe Will Face This Summer
What are the best beaches, restaurants and attractions in Hawaii? Vote now
Conde Nast to the local Italian Paper – Jocelyn is at it again