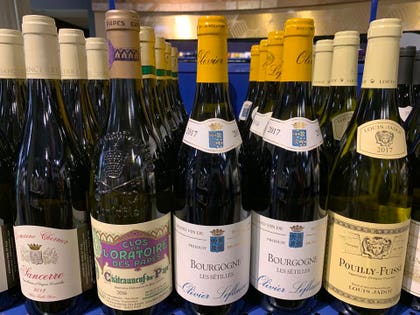 The United States (US) Treasury Department’s Tax and Trade (TTB) regulations apply a higher tax on sparkling wine over still wine, and the tax on still wine increases when the alcohol by volume (ABV) exceeds 16%. For the purposes of taxation, any wine over 16% is considered either dessert or fortified, with a separate tax for wine between 16% and 21%, as well as on wine over 21%.

The 2018 Republican tax overhaul increased the alcohol limit from 14% to 16% ABV on the still wine tax. Maybe that was a reflection of what many wine writers claimed was a rise in alcohol by volume in US wines over the past two decades. If so, TTB would have been responding to winemakers, the public, politicians and (maybe) wine writers (but I strongly doubt that). Possibly, TTB responded to the effects of regional vineyard warming as a result of climate change (which I also doubt).

I don’t know the reason for the 14% ABV change to 16%, but I do know that the Trump Administration announced a 25% increase in the import tariff on European Union (EU) wines (among other products) to begin October 18, 2019, and it’s been reported the increase applies to wines under 14% AB.

In addition, the new tax does not apply to all EU wines; Italian and Portuguese wines have escaped the increase.

For cooler northern European regions the new tarrif is problematic, because by the nature of their climate, many wines are under 14% ABV.

Some US importers specialize in wines from certain regions; what will the effect be on those who specialize in northern European wine regions? For now, a strong dollar helps importers in currency exchange rates, but no one knows when that will change. Importers can choose to absorb the tariff, but it’s doubtful they can or will absorb the full 25%.

What will the effect be on small northern European producers, who importers may ask for a better deal to keep the retail price down in the US? Unlike conglomerates, small, often family producers have precious little leverage in price negotiations.

In the American Association of Wine Economists Working Paper No. 237, Jon P. Nelson, Department of Economics, Pennsylvania State University and John R. Moran, Department of Health Policy and Administration, Pennsylvania State University, conclude increased alcohol excise taxes tend shift to wholesale buyers and/or consumers, but market complexity does not guarantee a direct one-to-one pass through. The new wine tariff increase is likely to have a ripple effect throughout the supply chain, and it may include all EU wines, whatever their ABV.

One more complexity added to this tariff increase is that the EU tries to apply unified trade tariffs in all its member countries. If the EU decides to retaliate by increasing tariffs on US wines, the increase is likely to apply to Portugal and Italy. How will the Trump Administration respond to tariffs on our wines being increased in two countries the had been spared?

Meanwhile, the luxury products company LVMH posted an 8% growth in its wine and spirits portfolio; the company includes Moët & Chandon, a luxury sparkling wine usually under 14% alcohol by volume. To the plebian among us, the tariff might seem like poetic justice, but as indicated in my previous paragraph, if any segment of the wine industry increases prices it’s quite possible all segments will.

Sadly, the EU/US fight that brought us to this point had nothing to do with wine. For about fifteen years the US has registered its displeasure over what is perceived as EU subsidies to its airplane manufacturing industry, which puts Boeing at a disadvantage competing with Airbus. To make matters more baffling, while the tariff increase on wine is 25%, the increase on the airline industry is 10%.

The best hotels near Oxford Street in London
How to get around Toronto like a local
The 11 best places to visit in Switzerland
Why kids will love New Orleans as much as you do
Do I need a visa to visit Switzerland?