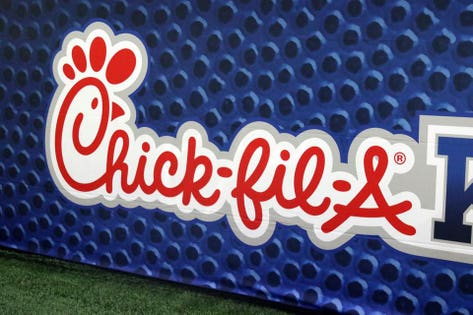 For sheer entertainment value, it’s hard to beat a social media dustup between two brands (as long as it’s not your client that’s taking a beating, of course). I find myself keeping a professional eye on the proceedings—if only to ask, what can I learn from this? Because in the social media age, there are always eye-catching new tricks being unveiled in the cyber-Colosseum.

A classic spat to hit the headlines this year was the chicken sandwich war between Popeyes and Chick-fil-A. In this corner: the challenger, Popeyes, which launched a fried chicken sandwich with a single, intentionally garbled tweet: “Chicken. Brioche. Pickles. New. Sandwich. Popeyes. Nationwide. So. Good. Forgot. How. Speak. In. Complete. Sandwiches. I mean, sentences.” Pickup was okay, but it wasn’t until almost a week later when the gloves came off and things went viral with a snide response tweet from Chick-fil-A that boasted about being the “original.” Wendy’s joined the fray, and #chickensandwich soon became a top trending topic on Twitter.

Feathers, clearly, were ruffled, but Popeyes rose to the top of the Tweet-storm pecking order—garnering an estimated $23 million in equivalent advertising spend, according to Apex Marketing Group, and experiencing a frenzy of demand that saw many of its stores sell out of the sandwich in just two weeks. I hope the CMO of Popeyes thought to send Chick-fil-A a fruit basket.

But the question is, did Chick-fil-A lay an egg with its decision to start a barnyard tussle? Was it a social media fail?  Or was it actually inspired?

I don’t know how the books ending up looking for Chick-fil-A in August, but I suspect the storm served them pretty well, too, in terms of both positive digital impressions and actual sales. Suddenly, everyone was in the mood for a chicken sandwich.

The decision to newsjack someone else’s moment is a tough call to make. It has the potential to be huge; a single tweet can pack the same punch as a million-dollar prime-time TV slot. It also has the potential to go horribly wrong. This space can be aggressive, unforgiving, dangerous—but also immensely clever and more than a little fun.

As a rule, tragic news stories, natural disasters, emergencies and foreign altercations are off-limits. Campaigns that have tried to muscle in where there’s any element of human suffering do not end well. DiGiorno Pizza learned that the hard way a few years back when it carelessly hijacked the #WhyIStayed hashtag around domestic violence. To its credit, its apologies were immediate, profuse and in the first person—reminding the outraged Twitterverse that they were dealing with a human being who had made an awful mistake, not a faceless and uncaring corporation.

On the other hand, political foibles, celebrities, trending topics—these are all fair targets for newsjacking. To seize your opportunity, you need to be quick—meaning that you need someone on your side constantly scanning the airwaves. As important, you need a responsible decision-maker who can instantly make the call on whether diving in is an inspired work of genius or recipe for disaster.

I don’t think Chick-fil-A got anything wrong in the #ChickenWars. Their jumping in helped ignite the tribal loyalties of each brand’s respective customer base. In the end, this little gladiatorial battle was good for all brands involved. And it was fun to watch.

Holiday Gift Guide 2022: The Best Kitchen Gifts For Food Lovers
These are the 10 best splurge-worthy gifts of 2022
How to make German currywurst
U.S. World Cup team pelted with political questions in tense news conference ahead of crucial Iran game
16 Travel Hacks That Actually Save Money