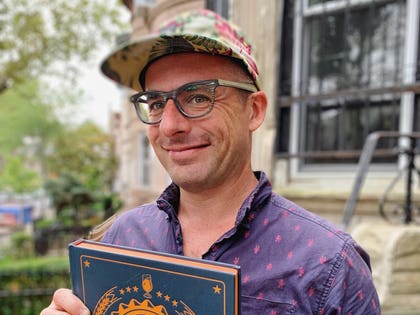 If you haven’t heard of Josh Bernstein, you’d do well to read one of the four books he’s written about beer over the last couple years. Each title charts a distinctive topic in craft’s meteoric rise, starting with Brewed Awakening in 2011, then Complete Beer Course in 2013, then Complete IPA in 2016, and finally Homebrew World in 2018.

The impetus for Bernstein’s fifth and most recent book, Drink Better Beer, was a desire to curate the vast amount of often disparate information that emerged from a rapidly developing industry.

“Six or seven years ago, the pathways to discovering better beer was easily accessible,” said Bernstein. “But nowadays, we’ve gone beyond talking about style. If I was confused, I figured other people were as well.”

Drink Better Beer, which came out on September 17th, 2019 from Sterling Epicure, attacks its subject admirably. In all of Bernstein’s work, one of his greatest gifts is that he brings a level of cerebral attention (or as he calls it, “Talmudic intensity”) to his work. Rather than focusing on micro releases, or condemning consumers for getting excited about seemingly nonsensical products like double dry hopped lactose IPA, he pauses to note that taprooms only make up a small fraction of beer’s overall sales, and reflects on the way lactose has the capacity to create pairings that didn’t previously exist.

Additionally, Bernstein’s book excels in its curation. The book features a who’s who of craft beer’s most knowledgeable brewers, salespeople, marketers, and designers. Hear about freshness from industry darling Dan Suarez, co-founder of Suarez Family Brewing in Upstate New York. Learn about IPAs from Noah Bissell, co-founder of Bissell Brothers in Portland, Maine. There are quotes from Em Sauter, Yvan De Baets, Ivan Orkin, Stephen Hale, Melissa Cole, and many, many more.

Bernstein also succeeds in profiling beer figures that don’t get as much acclaim.

“One of my favorite interviews was with Dr. Henry “Hoby” Wedler, a blind sensory specialist,” said Bernstein. “So much of what we process from the world is visual. But it doesn’t really tell us a lot.”

Another fascinating interview is Dr. Tom Shellhammer, Nor’Wester Endowed Professor of Brewing Science at Oregon State University and one of the preeminent hop researchers in America. In the interview, Dr. Shellhammer talks about America’s culture of excess (“We’re not really a culture of finesse”) and how this zeitgeist has led to the preponderance of hoppy beers.

Through Bernstein’s intellectual lens, as well as the knowledgeable lens of his friends and industry experts, the subject comes alive in an educational but approachable way. The sharp images, sourced by several dozen of the industry’s most talented photographers, also creates an air of approachability, while simultaneously serving to create a text that’s more coffee table tome than bedside read.

Thai stink beans with shrimp recipe (วิธีทำ กุ้งผัดสะตอ) – my favorite!
The 7 best hikes in Argentina cover every kind of adventure
For The Love Of Ice-Cream: Why An Upstate Auto Dealership Opened An Ice-Cream Shop
The best Edinburgh hotels with parking
Introducing Yellowstone & Grand Teton National Parks