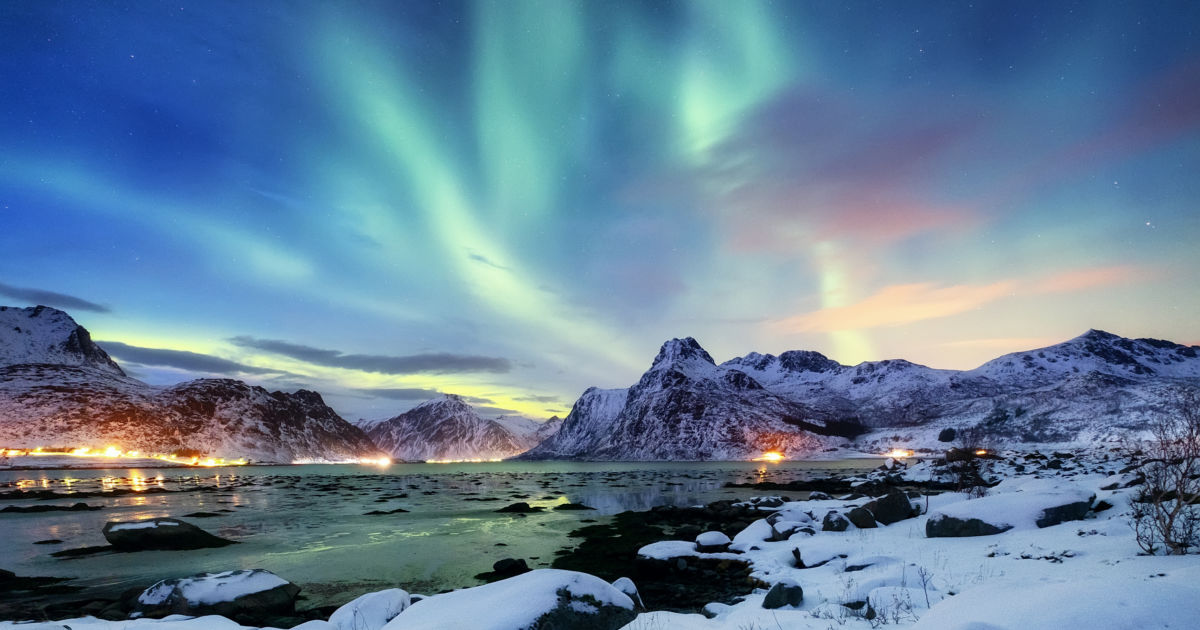 They’re high in the sky and high on many travelers’ bucket lists – and now’s a great time to plan your trip to view the Northern Lights.

Winter is coming, and it’s bringing with it the magnificent Aurora Borealis. More commonly known as the Northern Lights, the cosmic phenomenon is among nature’s most mesmerizing light shows. The visuals are mysterious and bewildering, and sometimes planning a trip to see them can feel the same way.

But trekking to the far north in winter doesn’t have to be complicated or expensive if you know what to expect and plan accordingly. Here are a few of the key elements to remember when building an Arctic adventure of your own.

Winter is prime Northern Lights season because the sky is at its darkest and days stay darker longer, especially near and in the Arctic Circle. Generally, the Aurora Borealis (which translates from Latin as “northern dawn”) is visible September through April, with the strongest lights glowing from November through February. Of course, no one can predict the weather, and cloudy skies are a big reason spectators may miss the lights.

The other big variable involves the sun, where the lights originate. The simple scientific backstory goes like this: the sun releases electrically charged particles that are carried across the galaxy via solar winds. When those particles reach earth’s atmosphere (really, its magnetosphere), they collide with oxygen, nitrogen, and other gases to form lights that appear to our eyes as gray, green, purple, red, and other colors. They’re strongest around the North and South poles, though some say that the Northern Lights have been seen as far south as Florida.

So the vital part of any Aurora viewing vacation is to plan ample time in a destination to account for cloudy nights and times when the sun is less flared up. Most agree to a minimum of five days, but eight might be wiser.

A trip north in winter can be surprisingly affordable thanks to lower hotel demand and cheaper airfares. Just aim for a smaller town or park with minimal light pollution. In North America, start your search in cities with nearby airports, tour operators, and lodging options. Along the Arctic Circle, consider Fairbanks, Alaska; Whitehorse in the Canadian Yukon; and Churchill in northern Manitoba (where Hudson Bay can yield some great watery reflections). Dark-sky delights also await in Banff and Jasper National Parks in Alberta; Torngat Mountains National Park in Newfoundland; and Nunavik Parks in Quebec’s Arctic region.

If you’re game to travel farther, consider the lovely small city of Tromso in Arctic Norway, which is more affordable thanks to Norwegian Air’s budget-friendly airfares, and a weaker Norwegian kroner exchange rate. The island nation of Iceland is another wallet-wise destination thanks to Icelandair deals. Plus both Norway and Iceland have infrastructure for winter tourism that makes it easier to find the right hotel and tour company.

Tip: Buy your ticket around two or three months out to lock in the best airfares.

Lodging in remote locales is easier than you may think, especially if you’re fine with a no-frills hotel that offers comfy beds and powerful heaters. Just aim to book six to eight weeks out (or longer) for the best rates, and remember that hostels may yield irresistible bargains. If you’re seeking more memorable accommodations, check into an igloo or panoramic dome with sky views, like the ones offered by Fairbanks’s Borealis Basecamp. Or try the glass-fronted chalets at Whitehorse’s Northern Lights Resort & Spa.

Upon planning a subzero January trip to the Arctic, I once asked a Norwegian for packing advice. His reply: “Bring a sweater.” I second that wisdom – especially for a hearty wool sweater – and also recommend investing in some serious thermal baselayers that you can wear every single day of your trip. (Tip: Uniqlo makes great lightweight, affordable long underwear.)

Other winter travel essentials include: wool or thermal socks, heavy gloves or mittens, insulated hats (that won’t blow off in the wind), a thick scarf or buff, and waterproof boots for high snow and powerful winds. Goggles or sports glasses are smart too, to help protect your eyes from blustery snow and wind. And it goes without saying that a waterproof, heavily insulated coat is mandatory if you want to be outdoors longer than 15 minutes.

Winter in the Arctic is no joke, so plan for the most intensely cold temperatures of your life.

For many, capturing the Northern Lights on camera is a core part of the experience – and the ultimate souvenir. The best photos require a DSLR or smaller camera with manual settings, because to capture the Aurora you’ll need a wide-open aperture and super-slow shutter speed (my best shots took about 30 seconds each to snap). Manual focus, adjustable ISO and f-stop, a shutter timer, and high-resolution image settings also are key. Plus you’ll need a sturdy tripod.

But more than anything, always dress as warmly as possible for outdoor Aurora photography, because you can spend hours pursuing the perfect shot, and it only takes a few minutes below zero to start losing finger sensation.

Tip: Set your camera up in advance with recommended Northern Lights–shooting settings, so you don’t have to fumble around with them on the spot (where it’s usually pitch dark and freezing).

The most successful Northern Lights adventures come with the help of expert local guides. So building on tip No. 2, consider destinations where seasoned tour operators know how best to predict the locations and timing for awesome light shows. On the bright side, since most of the best Aurora views are from small cities, you won’t have to comb through tons of listings to find good local guides.

Upon booking, look for companies that offer multi-night tours (in case no lights are seen on the first night or two), and ones that will drive safari-style to more than one location, since cloud cover could limit views in different spots. You might also double check that the tour will travel to areas far from urban light pollution, like parks and remote hilltops. Some may even offer basecamp-style huts or lodges with skylights, so you can stay warm indoors, perhaps with a mulled wine or cocoa, while gazing skyward.

The top 14 things to do with kids in Canada
LADIES OF FINLAND – WE NEED WIVES!
10 best cross-country skiing resorts in North America, according to readers
Unexplainable Music Echoes Through Tunnels | Destination Fear | Travel Channel
14 green gift ideas for the holidays that will help save the planet