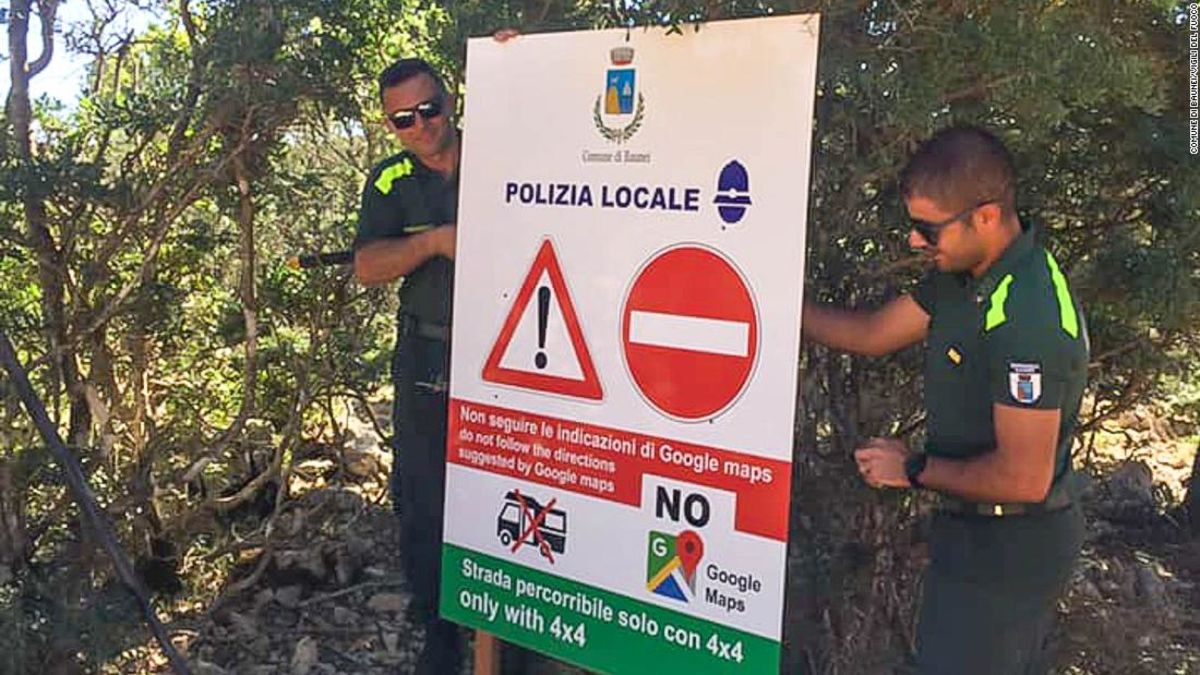 (CNN) — Unspoilt beaches at the foot of steep cliffs, romantic winding roads, and plenty of mountain wilderness — Italy’s Mediterranean island of Sardinia has it all.

But some tourists are finding the combination a little too difficult to take.

Authorities in Baunei, in Sardinia’s eastern province of Ogliastra, have launched an appeal to visitors, telling them not to rely on Google Maps to get around the area.

Tourists are routinely following their GPS down lanes that are unsuitable for cars and onto off-road tracks in a bid to make their way to “hidden” beaches, needing to be rescued by the local fire brigade when they get stuck.

The move follows 144 emergency call-outs for both cars and hikers in the province over the past two years. The final straw: the two tourists in a Porsche who were rescued by emergency services on a rough track in the Supramonte mountain range, known by climbers for its vertical rock faces.

They were looking for the pristine “cale,” or white sand coves at the foot of plunging cliffs, which Ogliastra is famous for.

The emergency services are effectively funded by the local community. Tourists do not have to pay for their rescue.

Mayor of Baunei, Salvatore Corrias, told CNN that authorities have erected signs around the area in Italian and English, advising tourists “don’t follow the directions on Google Maps”, and that the tracks are only suitable for all-terrain vehicles.

“Too many sedans and hatchbacks are getting stuck on unpassable tracks — sometimes offroad vehicles too. All because they follow Google Maps, whose instructions are often misleading on our roads.”

The authorities have contacted Google Maps, who have promised to look into it. “We’re waiting,” Corrias told CNN. “We have faith that they’ll do it.

“But we’ve seen nothing concrete yet, so we’ve gone ahead with the signs, putting them at the entrance to the most used roads, from [beaches] Cala Luna to Cala Goloritzé.”

“Even better, use our expert local guides — none of them would ever put visitors in danger,” he said.

Google Maps told CNN: “We’re aware of an issue in Sardinia where Google Maps is routing some drivers down roads that can be difficult to navigate due to their terrain. We’re currently investigating ways that we can better alert drivers about these types of roads.”

Do I need a visa to visit Switzerland?
The best hotels for woodland walks in Britain this winter
Spain adds long-distance buses to its free train and transit journeys
An expert guide to ski holidays in Vail
Do I need a visa to travel to Ireland?