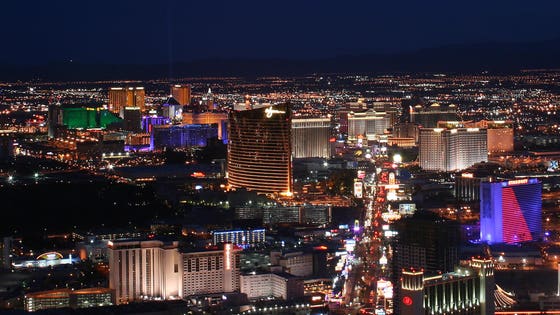 I just received an invite from someone at WYNN to spend an upcoming holiday weekend at one of their many Las Vegas resorts. It’s the first time I’ve heard from the big casino operator since I stayed at one of their Sin City properties about 3 or 4 years ago.

What made this odd is that the letter arrived just after I’d been reading in Forbes about how Nevada gaming regulators had asked to exclude Steve Wynn from the casino industry. The former CEO quit the company last year after sexual harassment charges that he denies.

In the meantime, the company carries on and sends out form letter invitations like the one I received trumpeting holiday rates at various locations. The whole situation brought back memories.

I met Steve on the morning that he and Elaine opened the Mirage thirty years ago. I was working on the morning show at KLUC-FM along with my then sidekick, Mike O’Brian, when they joined us just in front of the new property as the doors opened.

I remember that Steve was having vision problems back then and that Elaine seemed in charge, was gracious and very well-dressed. Their daughters, Kevyn and Gillian, joined us and I recall talking to one of them about how Boulder seemed now that she was attending the University of Colorado – but I’m embarrassed that I am unable to remember which daughter it was. I think we compared notes about Naoki’s, a Boulder restaurant that’s come and gone.

The Mirage seemed glorious and wonderful and quite the change from their old-school downtown property, The Golden Nugget – but they were only getting started, looking back on it. I didn’t mention to the Wynns that I’d been counting cards at the Nugget’s blackjack tables which I’ve written about for Forbes right here.

I can’t tell you how stunning and odd it seems that one of the real visionaries behind the growth of the city may now be excluded from the businesses – and the culture – he created. Maybe I’ll take up the invitation I’ve received and check out how things look now.

Meantime, here are the charts, beginning with the daily:

Investors will want that support level at 102 to hold – it’s held 3 times this year but seems to keep returning there. A close or 2 above the downtrend line connecting the April high with the July high (above the price) might be a helpful sign.

Whoever unloaded in early 2018 had remarkably good timing. You can clearly see the 102 support level here as well.

The price has returned to that uptrend line that connects the 2009 trough with the early 2016 low. A close or 2 below that line might be a problem.

And for those of you who can remember what it was like to make up price charts with pencil and paper, before computers, here’s the point-and-figure look:

Full disclosure: I miss the days when it was just the Golden Nugget and no corporate types could be seen anywhere up or down Fremont Street. I understand that things change and sometimes mightily, but still.

I do not hold positions in these investments. No recommendations are made one way or the other.  If you’re an investor, you’d want to look much deeper into each of these situations. You can lose money trading or investing in stocks and other instruments. Always do your own independent research, due diligence and seek professional advice from a licensed investment advisor.