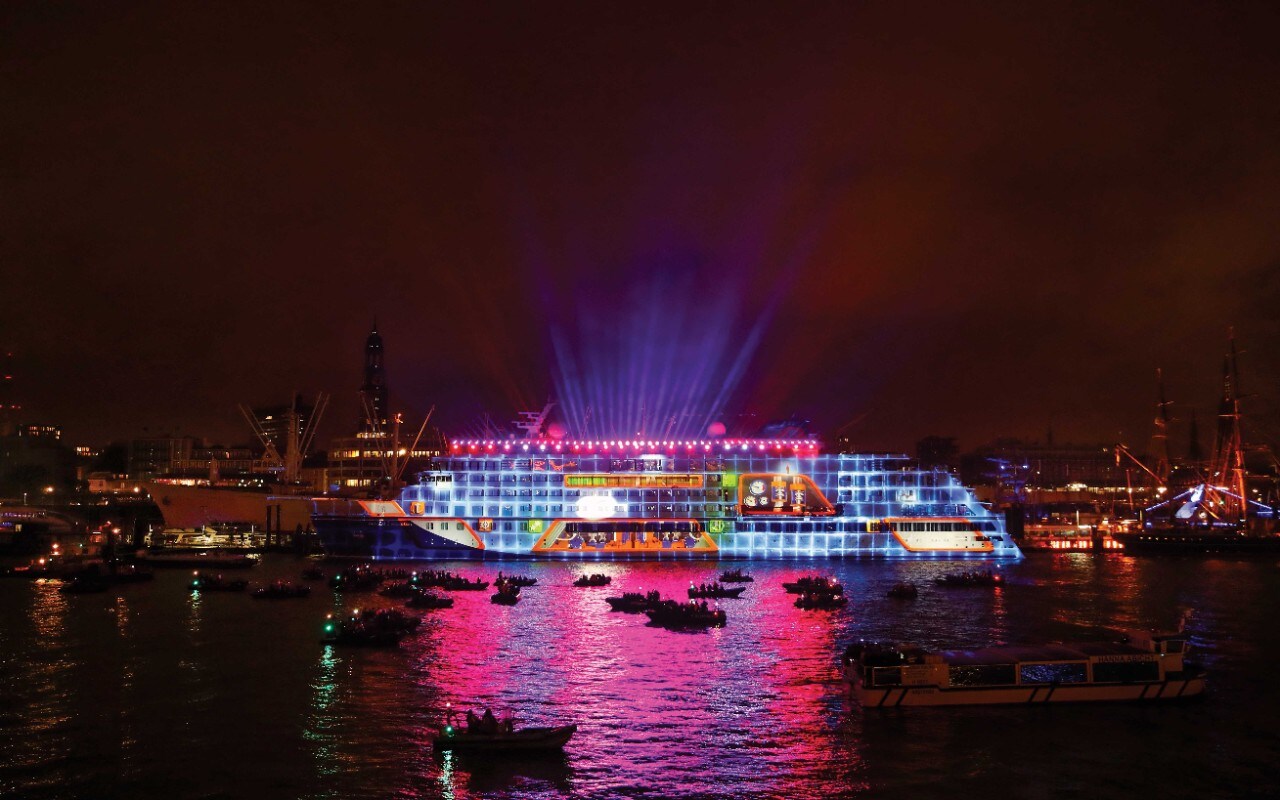 It’s fair to say that expedition cruising is having a moment. In response to the recent trend to be a traveller rather than a tourist, new expedition-style vessels are piquing the interest of those with adventure in their blood. To meet this demand, no fewer than 28 sassy new expedition ships are scheduled to take to the oceans between now and the end of 2022.

The latest entrant to this exclusive armada was christened on October 11 in the Port of Hamburg by Laura Dekker who sailed around the world solo at the age of 14. The spectacular ceremony on the River Elbe projected an animated tableau of iconic off-the-beaten track destinations on Hanseatic Inspiration’s white hull. Guests watched the 3D display from zodiacs and launches positioned around the ship on the water, which was like a paean to adventure shining like a beacon in the night sky.

Why is Hanseatic Inspiration far from cruising clichés?

Accommodating 230 passengers (199 when cruising in Antarctica) and with a crew of 175, the on-trend Hanseatic Inspiration is one of three new expedition ships from the acclaimed German company Hapag-Lloyd Cruises. The subtle difference with Hanseatic Inspiration is that it is bilingual – meaning all crew speak English, menus are printed in English, lectures and port talks are conducted in English and the expedition leaders and guides are also fluent in English.

What are the ship’s most novel features?

Extendible glass balconies on the Sun Deck where you feel like you are floating above the water; an Inspiration Walk which allows guests to access the bow of the ship (think of the scene in Titanic with Kate and Leo); and an Ocean Academy with interactive computers, four Study Seats and a Study Wall for enhanced learning as well as scientific microscopes for studying samples garnered during explorations ashore. There’s also a fleet of 17 Zodiacs as well as two eco-friendly, battery-powered Zodiacs for explorations in particularly sensitive areas.

What about personal space?

In the cruise world a yardstick of comfort is known as the space-to-passenger ratio, on the 15,650-tonne Hanseatic Inspiration this is 68.04 – one of the highest in luxury cruising let alone expeditionary ships. Raising the bar when it comes to creature comforts, there are 120 cabins and suites in six categories all with separable beds. These include 226 sq ft Panoramic cabins; 237 sq ft Outside cabins; similarly sized French Balcony cabins; 291 sq ft Balcony cabins (the majority of the accommodation); 452 sq ft Junior Suites; and 764 sq ft Grand Suites.

The décor is one of contemporary elegance and style that’s in harmony with the sky and ocean. Each has undulating lines and a natural palette. There’s a coffee machine and mini-bar with soft drinks (spirits are stocked in Junior Suites and Grand Suites). In keeping with the expedition theme there are Swarovski Optik binoculars and Nordic walking poles. 24-hour cabin service is also available and shipboard information is displayed on interactive flat-screen TVs (sadly BBC World and CNBC are the only English-language channels). Bathrooms have a rain shower and heated wall to dry clothes after explorations ashore. Junior Suites and Grand Suites have butler service.

All restaurants on board are open seating and offer top quality cuisine with a European influence. With plenty of tables for 2, 4, 6 and 8, the stylish Hanseatic Restaurant seats 180 guests and is open for breakfast, lunch and dinner; the buffet-style Lido Restaurant has space for 84 guests inside, 100 outside at the stern of the ship and is also open for breakfast and lunch. The intimate 44-seat Nikkei Restaurant specializes in Japanese – Peruvian cuisine.

Where’s the best place to chill?

The HansAtrium is the venue for presentations by expedition leaders and Polar experts such as David Fletcher who has spent four winters and 44 summers in Antarctica, winning the Royal Geographical Society’s prestigious Polar Medal. A special feature is the floor to ceiling LED screens around the room where stunning images of the remote regions visited by the ship are projected to great effect. There’s also a cocktail bar and the Invisible Lounge next door – currently a humidor, this will be transformed in October 2020 when Hanseatic Inspiration becomes a non-smoking ship.

The Observation Lounge offers 180-degree panoramic views which can be enjoyed while relaxing with an aperitif at the bar. This is where afternoon tea is served accompanied by music from the grand piano. The central feature is a large globe under a crystal canopy, there’s also a large selection of books in the library. Close by is the Pool Bar where snacks and ice creams can also be enjoyed.

What about relaxation and fitness?

There’s a swimming pool and whirlpool as well as sun-loungers under a retractable roof. The Ocean Spa with a massage room, facial room and pedicure room uses only organic products such as Vinoble in its treatments. The Sports Club has a range of Precor and Spinner equipment including treadmills and bicycles; there are also boxing classes, yoga sessions and spinning classes in the Fitness Room. The marina at the stern is ideal for watersports activities such as kayaking. A Mud-Room and changing room with lockers is a useful facility when returning from adventures ashore. A boutique sells quality logo’d wear as well as high-end fashion items.  WiFi is available throughout the ship.

All gratuities for the crew are included, so too are all landings and rides aboard the ship’s Zodiacs. There’s also a welcome bottle of champagne and mini-bar restocked daily with a selection of soft drinks. Also included are all meals, use of Finnish sauna and one hour on Internet. Alcoholic drinks and wine in bars and restaurants are charged for.

Is it just Pole to Pole?

Expedition cruising is in Hapag-Lloyd Cruises’ DNA – they were the first cruise line to sail around Svalbard, transit the challenging Northwest Passage as well as navigating the previously impassable Northeast Passage.  With the highest ice class for passenger ships (PC6), Hanseatic Inspiration can explore remote Polar Regions. In the British winter the ship offers Antarctic explorations of varying lengths from 12-days to 32-day semi-circumnavigations of the icy continent. There are also cruises to the Chilean fjords. In summertime there are voyages to Svalbard, Greenland, Canadian Arctic and Russian Far East. Other cruises head to the Amazon, the Azores, Cape Verde, South Africa and Iceland. Hapag-Lloyd Cruises is also one of the few companies to sail the Great Lakes in North America. Hanseatic Inspiration has retractable bridge wings (lookout points for the captain), which are required to enable the vessel to transit the many locks that are integral to the Great Lakes.

Idli Sambar – Eating Steamed Rice Cakes on a Narrow Lane in Varanasi
A postcard from the Austrian Alps: my ski trip to Gurgl in pics
The best après ski in Jasná
Thai stink beans with shrimp recipe (วิธีทำ กุ้งผัดสะตอ) – my favorite!
Wine In A Bag, In A Box, With Recylable Packaging And It’s Delcious? Yes, Juliet Wine Is The Real Deal