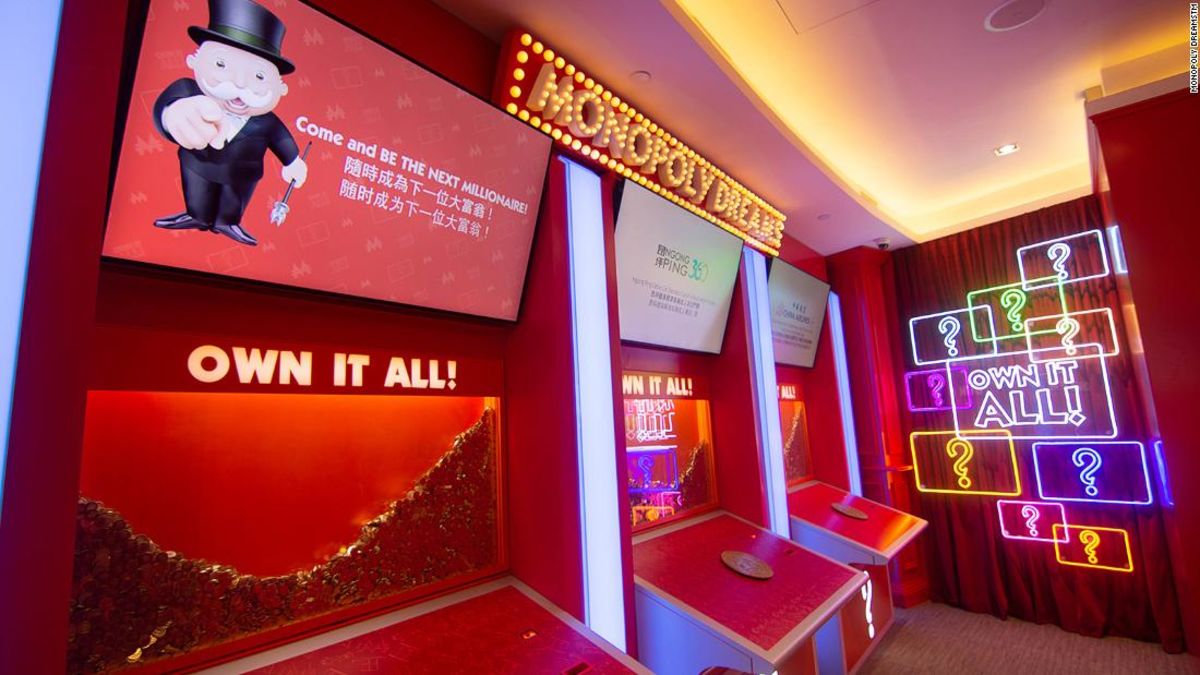 Opening at The Peak on October 26, Monopoly Dreams is said to be the world’s first fully immersive attraction inspired by the 84-year-old board game.

“The Peak is the most valuable piece of land in the Hong Kong version of Monopoly … it was why we chose this location to start with,” Macci Li, public relations representative for Monopoly Dreams, tells CNN Travel.

Created in 1935, Monopoly is one of the world’s most popular board games, available in more than 40 languages and sold in over 100 countries.

The first Chinese version of the game launched in 1965, called “Choi Yuen Kwong Chun” and featuring local properties and railroads.

The new 20,000 square-feet attraction is a collaboration between Hasbro — Monopoly’s owner — and Monopoly Dreams, a company established to design and create the new Hong Kong attraction.

“The biggest challenge is how to bring a 2-D game alive into an immersive experience,” says Li.

“As it’s a well-loved game, we don’t want visitors to come in to see and expect what they already know. We hope the attraction can transform familiar elements into refreshing interactive experiences.”

Mr. Monopoly is the star of the new Peak attraction. Visitors will first ride on an elevator to access his secret residence, one of seven major themed areas within the park. His home features rare Monopoly collectables as well as an oversized version of the classic metal car game token — Mr. Monopoly’s antique race car.

After walking through Pass Go, a neon light-lit tunnel, visitors will arrive at the town of Monopoly.

The Fortune Board gives visitors a chance to win gold tokens and plane tickets.

The attraction is packed with all the classic Monopoly elements like “Jail,” “Water Works” and “Electric Company,” while some of the themed zones include interactive activities.

At “The Bank,” for instance, visitors can catch Monopoly cash coupons, which they can spend at the park’s gift shop and café.

The “Train Station” features a 4-D cinema screening a short film about the adventure of Mr. Monopoly and his dog.

The biggest highlight is the Fortune Board, where visitors can spin the wheel to win prizes, which range from business class plane tickets to food coupons.

The most valuable prize is a one-kilogram pure gold token.

“The idea is that none of the players will go home empty-handed — it’s actually the original notion of Monopoly,” says Li.

In addition to the usual merchandise like keychains and mugs, the gift shop also stocks a wide array of special edition Monopoly games.

The Monopoly café, meanwhile, serves a range of Asian snacks including siumai dumplings and guabao.

Can’t get to Hong Kong? Looks like Monopoly Dreams is already planning to expand.