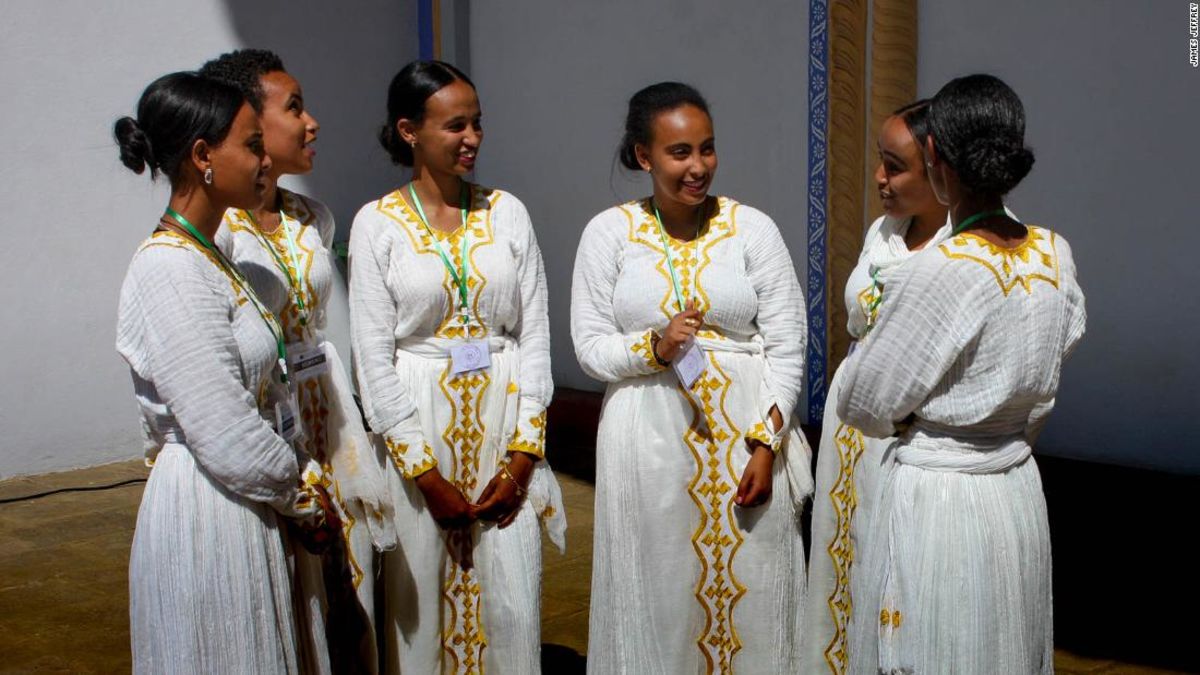 Almost hidden from view on a wooded bluff, its forbidding 40-acre compound was unknown even to some of those living beneath it. Behind its walls, plots were hatched, conquests planned and dark deeds executed.

Red-bereted elite soldiers with AK-47s manned watchtowers dotted around the perimeter. Pedestrians had to walk on the far side of the road surrounding the compound. If a car broke down, it had to be pushed to the far side too.

Symbolic lions guard the entrance to the Throne House.

Today, the soldiers are still there, but the curtain has finally been raised on the mysteries within following renovation of a section of the compound that has housed Ethiopia’s rulers since the days of Emperor Menelik II.

Locals and tourists are now being invited in to explore the 15-acre Unity Park created out of the palace complex. Although it remains the residence of the prime minister, land has officially been given back to the city of Addis Ababa.

The renovation work is at the behest of the charismatic prime minister, Abiy Ahmed; some $170 million has been lavished on it.

“It’s fascinating to get in here, as I am Ethiopian and I never knew what was here before,” says Akilu Fikreselassie, who works with the United Nations on urban development. “It shows people they have access to their leaders and will help build trust. Having the park will also help with changing the urban dynamic of the city.”

As well as symbolizing a government that is meant to be leaving behind an authoritarian past, the unveiling of the park is part of ongoing efforts to beautify a rapidly growing city chock-full of five million residents and rampant construction.

For all its vibrant merits, Addis Ababa is a concrete jungle of a city where open green spaces offering locals and wearied travelers respite from the ceaseless cacophony are hard to find.

The park, covering 15 acres, is much needed in Addis Ababa.

“It’s quite spectacular,” Michael Raynor, the American ambassador to Ethiopia, commented while touring the park during an inauguration event earlier in October. “It’s a new asset for the community. Addis has struggled to have this sort of open space that any world capital needs.”

The park comprises a mixture of landscaped open areas, renovated palace buildings and animal enclosures. There’s a sense of fun and quirkiness to much of the layout and design, a contrast to the darker times the palace has seen, when purges were plotted, and prisoners tortured within its walls.

Now quirky sculptures and the likes of orange hippos submerged in the grass are dotted around the walkway that winds from the entrance up the rising ground toward the palace complex of Menelik, who reigned as emperor from 1889 to 1913.

Behind the Throne House containing the golden-filigree headwear of Menelik and other former emperors such as Lil Eyasu and Haile Selassie is a network of old buildings where Menelik and his family lived. They’ve all been renovated and brought back to life with elbow grease and paintwork.

Menelik’s private quarters include a raised walkway to the so-called “Egghouse,” an elaborate tower with intricate woodwork decorating its spiraling stairwell.

Surrounding it are Empress Taitu’s quarters, as well as other buildings that housed the princes, princesses and guests who came to pay homage and petition the emperor.

A waxwork of former emperor Haile Selassie sits in the Throne House.

Various historical artefacts such as Menelik’s curved swords, his umbrella and fly swatter, and panels giving historical information are dotted throughout rooms illuminated by the bright Addis sunshine pouring through windows.

Opposite the Throne House is an open area with various services including eateries, a book shop, and cafes offering coffee slowly roasted and brewed the traditional Ethiopian way, or more rapidly with fancy Italian coffee machines.

“It means a lot to be able to open here,” says Selome Tadesse, owner of the Addis-based Emoles coffee chain that opts for the faster approach. “Both from a historical point of view, but also in being able to bring in a new style, mixing the old and the new for the new generation, which is a good thing.”

Tadesse admits it’s been a rush to get everything set up in time for the inauguration day and says Prime Minister Abiy Ahmed, who spearheaded the project and was recently awarded the Nobel Peace Prize, came to the café in person to see how she was getting on.

Indian artisans were drafted in to work on the renovation.

A nearby impressionist sculpture garden features nine pavilions representing the country’s nine regions, each championing the vivid culture and traditions that manifest in such a diverse and historically rich country.

It’s a far cry from when the palace grounds were little more than a shabby military camp with dull office buildings during the rule of Mengistu Hailemariam who led Ethiopia’s military junta in the 1970s, and the banquet hall and surrounding palace buildings were boarded up shut.

Renovation efforts included flying in Indian experts from Gujarat and Punjab to help restore the banqueting hall, as architects from the two Indian states participated in its original construction.

Ethiopia’s summer rainy season, the most recent being a particularly strong one, posed challenges for the massive landscaping and renovation efforts. Hence on inauguration day, not all the animals had moved in, while there were still finishing touches needed around the park.

But nothing extra needs be done regarding the stirring view afforded of Addis Ababa’s skyline.

The park contains a zoo, which will be home to an Abyssinian Lion.

From the park visitors can see a panorama of high-rise buildings and construction cranes dotted around the sprawling city laid out on rolling hills basking in the brightly lit high-altitude air — Addis sits at 2,300 meters, making it one of the highest capitals in the world — all set against dark silhouettes of surrounding hills in the distance.

The park also contains a zoo that will house wild dogs, cheetahs, lions, baboons, monkeys, flamingos and an aviary. A separate enclosure houses the Abyssinian Lion that’s indigenous to Ethiopia — the male’s mane is black — and has been built to replicate the cave complex that is the lion’s natural habitat.

A 175-meter tunnel running through and under the complex allows visitors the chance to get an even closer look at this iconic resident of Ethiopia.

Among a group of ushers handing out bright yellow Meskel flowers to guests arriving at the inauguration day, opinions about the park varied.

“It’s beautiful, I like it, and will definitely come back with my friends,” says 21-year-old Mettie Edessa, who added she has already registered at the park’s online site for her friends to come (daily numbers will be limited, hence online reservations are advised).

Her colleague, 24-year-old Kalkidan Kedir, says that seeing the park once was probably enough for her, noting that a recent advertising campaign had made it look more attractive than it is, though she acknowledged “that always happens.”

A couple of kilometers away is another secluded historical enclave, the Jubilee Palace, the former home of Emperor Haile Selassie — replete with stone Lions of Judah flanking its entrance — and where the current Ethiopian president, Sahle-Work Zedwe, lives.

The plan is for the president’s residence to move and join the prime minister’s in the Imperial Palace compound, with the Jubilee Palace being opened to the public in the first half of next year.

A portrait of Menelik II painted on animal hide hangs in the palace.

After years of its tourism industry growing briskly, ongoing civil unrest across Ethiopia — Addis Ababa remains relatively insulated — and accompanying stories in the international media may well explain the scarcity of foreigners visible around the city.

Mid-October is meant to mark the start of Ethiopia’s peak tourist season now that the incessant rains have been replaced by continuous days of brilliant sunshine.

The hope is that opening up the likes of Unity Park and further follow-on projects will reinvigorate the tourism sector of one of the world’s most intriguing and spellbinding countries, as it tries to cast off the legacies of a tumultuous past.

U.S. World Cup team pelted with political questions in tense news conference ahead of crucial Iran game
Surfing as Santa Claus in Venice Beach California
How to get around Toronto like a local
An expert guide to ski holidays in Vail
10 Coolest Winter Places in America