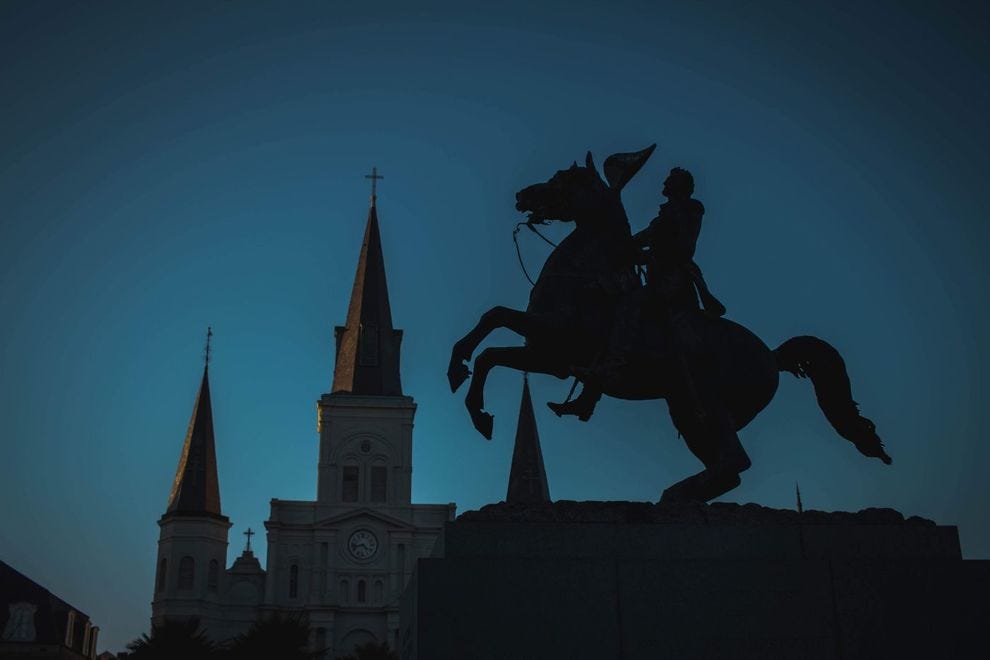 Most successful businesses have had to face a major hurdle or two along the way, but for French Quarter Phantoms in New Orleans, their biggest hurdle was actually the catalyst that inspired owner Cindi Richardson to start the tour company.

When Hurricane Katrina hit in 2005, Cindi and her neighbor, Mike, remained in their homes. As they got to know the rescue workers, they noticed there was an air of “Why rebuild? Why even stay in a city built on a swamp?”

Inspired by these questions and grateful for the hard work of the volunteers and rescue workers, Cindi and Mike had the idea to introduce the workers to the city they love through historical ghost tours of the French Quarter.

Cindi recalls thinking, “Let’s walk them around, tell them some stories and try to give them this passion we have for New Orleans. Then they can better understand why they are here…and walk away with a new interest, curiosity, love and respect for what New Orleans really is.”

During the day, Cindi would walk around to the different work sites and invite the people she met to join her and Mike, a licensed tour guide, in the evening for a guided tour. In the evening, Mike would lead whoever showed up on a free tour.

“If you love this city, you love it,” Cindi explains, “And you want to let people know why you love it, what is so wonderful and unique: the deep history and the passion of the people who live here.”

Introducing the volunteers and workers to their home and sharing their love for New Orleans was their way of saying “thank you” while working to shift the country’s narrative about the city.

The two continued to offer free tours for close to a year, until visitors began trickling back in – many of whom were rescue workers returning to introduce their friends and family to the city they’d grown to appreciate through a tour with Cindi and Mike.

Over the last fourteen years, French Quarter Phantoms has expanded and now offers seven tours: Ghosts and Vampires, Saints and Sinners, True Crime, Cemetery, Treme, Music of NOLA and the Garden District, all of which are based on historical documentation, news stories and police reports.

French Quarter Phantoms has received many accolades and awards over the years, including being voted Best Ghost Tour of 2018 by 10Best readers.

French Quarter Phantoms sets themselves apart by employing “Master Storytellers” as their guides. Each of these individuals is highly educated and incorporates their own research, personalities and experiences into the tour, meaning each tour offers visitors a unique experience.

Trusting that the French Quarter Phantom guides are some of the best in the business, we asked them to share some of their favorite haunted spots in the city.

These stories are sure to get you in the spooky spirit and inspire you to check out French Quarter Phantoms on your next visit to New Orleans.

“Inside of St. Louis Cemetery #1, there are a ton of massive tombs known as society tombs. They’re a kind of mass grave for members of organizations to be buried in. The Italian Mutual Benevolent Society tomb, also known as the ‘Hex Tomb,’ is one of the most beautiful structures in the city and is not to be missed. It’s carved completely from imported Italian marble called Carrara, and it stands as the tallest structure in the entire cemetery.

“The tomb is believed to have a ‘hex’ on it because the man who built it was also the first to be buried inside of it. In the act of building it, he contracted yellow fever and never made it back to Italy. Imagine traveling to the ends of the New World for no other reason than to build your own tomb.” – Stephen G.

“On St. Peter Street right across from St. Louis Cathedral sits Le Petit Theatre du Vieux Carre…Like many theaters it has its share of ghost stories, including the tragic tale of a young choral girl who took the eye of the producer and found herself starring in leading roles.

“After a time, the eye of the producer moved to another young girl and she found herself demoted to lesser roles. As vengeance, she hung herself in the middle of the opening night performance of the largest production of the season. Legend says she continues to appear to the audience each opening night as a shadowy form hanging against the backdrop of the stage. Break a leg…or neck!” – Luke S.

“This austere Creole townhouse was once the home of Norma Wallace, the infamous ‘Last Madam of New Orleans.’ During her time here, she was known not only as a highly successful business woman, but also as a gracious hostess with a keen eye for detail.

“Nearly a century later, time has done nothing to loosen her hold over the house – but this is no ordinary ghost! She is known to appear to young men in need of assistance, readily providing them with whatever they may need. These gentlemen all the while are unaware that the solicitous, quaffed lady has not drawn breath since long before their own birth.” – Rt. Hon. Lee Sensibaugh

“Creole Cookery, formerly O’Flaherty’s Irish Channel Pub, is home to three spirits: the former lady of the house, Mary Wheaton; her husband, Joseph, and his mistress, Angelique. Ever the savvy hostess, Mary haunts the 2nd floor of the building, wearing a white dress and supervising business.

“Flirtatious Angelique, killed by Joseph in a brutal lovers’ quarrel, resides in the courtyard. And Joseph, the angriest and most terrifying of the ghosts, inhabits the topmost floor and is known to cause nausea and dread as visitors climb the stairs.” – Hope K.

On Chartres Street in the French Quarter of New Orleans sits the Pharmacy Museum, originally home to the first licensed pharmacist in the United States. Medicine of the 19th century was nothing short of barbaric. From trepanning tools used to drill holes in the skull to ‘release pressure’ (to remedy headaches), to chemical substances that today would get one thrown in prison (being prescribed for a variety of ailments), to early beauty practices that would chill the soul, the 19th century pharmacy was not a place for the faint of heart.

“It doesn’t help that the second doctor to inhabit the property was said to kidnap pregnant women for various experimentation. It is said that this grisly spirit continues to haunt the location and that pregnant women still feel nauseous when near the building.” – Luke S.

“Late 19th century New Orleans was a city of duality, and no one was more aware of that than Julie, a free woman of color, and Michi, the Frenchman whom she loved. Julie had been pressuring him to marry her, and one December night, Michi snapped. In a fit of frustration, he issued an ultimatum in jest: Julie was to prove her love for him by stripping naked and waiting for him on the roof – where he later found her, disrobed and frozen solid.

“It is said Michi died soon after of a broken heart. On cold nights in December, people will sometimes claim they see a woman standing on the roof of 734 Royal Street. Some have gone so far as to call the police to report it; once they give the address, however, many an officer will respond, ‘Oh, that’s Julie. The poor girl is still waiting.'” – Malika Hadley Freydberg

“St. Vincent’s Infant Asylum in the lower Garden District was built in 1861. The Asylum housed orphaned children ages birth to 5 years through the Civil War and the Yellow Fever Epidemic. Now operating as a hostel, many guests report apparitions of children laughing and playing in the hallway.

“The shadowy spirit of a nun is often reported being seen descending the main staircase in the wee hours of the morning. Recent paranormal investigations confirm ongoing activity. Investigators were able to get the children to roll a ping pong ball, spin dowsing rods and speak to them through the spirit box!” – Cindi R.

The Cursed Block of Ursuline

“Here on the ‘Cursed Block of Ursuline,’ a strange trio of eerily similar murders has echoed down through the years. The first murder was committed by Hans Mueller, a German immigrant, who had moved to New Orleans to set up his butcher shop. After his wife, Gerta, discovered his infidelity, he killed her. Having no idea how to dispose of the body, he chose to become a Cajun Sweeney Todd. Upon being caught, he would claim no knowledge of the crime…at first.

“The report describes him as two men in one body: ‘flipping over’ and beginning to admit to everything and then ‘flipping back’ and denying any memory of confessing. Of course, dissociative identity disorder might explain Hans, but it certainly doesn’t explain the two copycats who would follow and the mysterious ‘man’ they would describe as forcing them to commit the crimes. Who is this man? The ghost of Hans…or perhaps there is something even darker at work here.” – Luke S.

“Saint Roch Chapel and Cemetery were built to show gratitude to the patron saint of plague sufferers, after the saint answered the prayers of a local priest, sparing his entire congregation from the 1867 Yellow Fever Epidemic. Within the chapel is a room containing offerings from those wishing to be healed by Saint Roch, including many prosthetic limbs and medical devices.

“Two apparitions haunt the cemetery: a cloaked figure known for walking through walls, and a large, unearthly black dog. Saint Roch is, curiously, also the patron saint of dogs. This well-maintained city of the dead, like all cemeteries in New Orleans, exudes a haunting tranquility, its tombs gleaming bone-white in the sun.” – Evian James

The 8 best beaches in Malawi
How to visit Taiwan on a budget
Spain adds long-distance buses to its free train and transit journeys
How to respectfully engage in Indigenous tourism in British Columbia
U.S. World Cup team pelted with political questions in tense news conference ahead of crucial Iran game