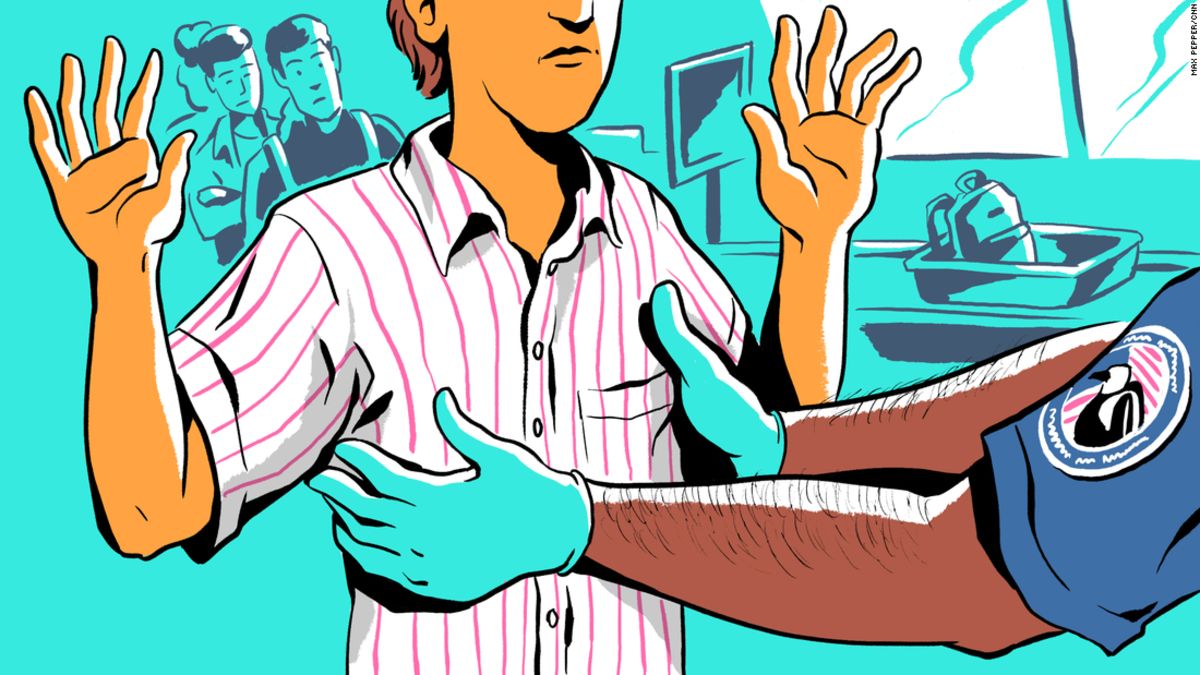 (CNN) — For Rev. Yunus Coldman, an interfaith minister and a New York-based transgender man, the anxiety of going through a TSA checkpoint starts days before he arrives at the airport.

“I begin to sweat the night before I know I’m getting on a plane because I’m trying to anticipate anything and everything that can happen. What are they going to ask me today? Am I prepared?” Coldman recently told CNN Travel.

Coldman flies for work on a semiregular basis and has faced varying degrees of difficulty getting through security. He claims to have been subject to negative treatment by TSA agents since he started identifying as trans six years ago.

“I had no such encounters with the TSA prior to my transition,” he said.

Flagged by body scanners multiple times because the gender that the agent selected didn’t match the anatomy of his body that the machine identified, Coldman has consequently been subject to pat-downs and bag searches. A couple of years ago, he was detained at New York’s John F. Kennedy International Airport when an agent questioned whether his ID, which was taken when his facial-hair-free face appeared more feminine, was actually him.

Suspicions of his identity are one thing. Coldman’s prosthetic penis, which he compares to “a prosthetic just like someone’s arm or leg,” is another.

To avoid getting flagged by TSA machines while wearing the prosthetic, Coldman lately chooses to pack the item — though he says he has experienced issues in both situations (wearing or packing).

Still, he recalls one instance a few years ago in which TSA agents waved the phallus in the air in plain view of other travelers. Questioning what it was and why Coldman was traveling with it, the agents, according to Coldman, acted inappropriately and unprofessionally.

TSA has specific guidelines on how it handles prosthetics, including that “screening involving a sensitive area may be conducted in private with a companion or other individual of your choice.”

But there may be a fine line between what the agency might classify as procedure and what a passenger would call a humiliating experience.

“For many transgender, nonbinary and gender nonconforming people, going through airport security is a grueling and often humiliating and traumatizing ordeal,” says Shannon Minter, legal director of the National Center for Lesbian Rights (NCLR), a nonprofit group that advocates on behalf of LGBTQ people. (“Nonbinary” refers to people who do not identify with either of the two traditional genders, narrowly defined. Intersex people have sex characteristics such as genitals or chromosomes that don’t fit typical binary notions of male or female bodies, according to the United Nations.)

“Some of the worst stories we hear are from gender nonconforming women who are subjected to intentionally assaultive pat-downs from TSA agents. In effect, these women are being asked to accept being sexually assaulted as the price of traveling by air,” Minter said.

TSA’s guidelines, which are publicly available, leave room for what some people might consider an aggressive screening.

“We have very specific instructions on pat-downs,” TSA press secretary Jenny L. Burke told CNN. According to TSA guidelines, agents may inspect “head coverings and sensitive areas such as breasts, groin and the buttocks. You may be required to adjust clothing during the pat-down.”

TSA guidelines also state that during screenings, “you will not be asked to remove or lift any article of clothing to reveal sensitive body areas.”

When asked whether TSA agents asking passengers to show their genitals was against protocol, Burke relayed, “TSA does not conduct strip searches.” According to Burke, TSA agents also undergo official sensitivity training as part of their annual requirement.

But many trans and gender nonconforming people tell a different story about their experience going through airport security.

In fact, a recently published investigation by ProPublica, an independent, nonprofit newsroom for investigative journalism, covered civil rights’ complaints filed from January 2016 through August 2019. It found 5%, or 298 complaints, were related to screening of transgender people. The figure is notable because transgender people are estimated to make up slightly less than 1% of the US population.

As part of the research, ProPublica put out a call for stories from trans and gender nonconforming people who were mistreated by TSA and received nearly 200 responses. And yet only 14 of the responders said they reported the incident to TSA.

According to the report, many did not file complaints because they didn’t know how or they were afraid of outing themselves as a transgender person. Many also expressed concerns related to reliving the negative experience.

This is true of Devin Alexander, a Washington-based transgender man.

In 2013, he filed a formal complaint via email after a negative encounter with the TSA. He received an automated reply stating someone would get back to him.

When no one did, Alexander followed up via a phone call, he said.

But he didn’t fare much better there. After waiting on hold for more than an hour to speak with someone, he was told he would be sent a letter requesting a written statement. After waiting several weeks to get the official letter detailing next steps for his complaint and receiving nothing, he followed up again.

This time, his call led him to a person who informed him there was no record of his complaint, Alexander said.

Burke confirmed this, saying “TSA does not have a complaint with that name in the civil rights complaints database. Also of note, under published records management protocols, our electronic records are purged after six years from date of closure.”

“And honestly? I couldn’t stand repeating the story. Even now it makes me feel icky,” he says, referring to his experience going through a body scanner wearing a binder, an undergarment used to flatten one’s chest, at John F. Kennedy Airport several years ago.

“I had to go through a pat-down and was asked what I was wearing under my shirt. When I said, quietly, I was a transgender man, and wore a chest binder because I hadn’t had surgery yet, she very loudly called to another worker and said ‘Hey, we’ve got another one of those trannies again, can you believe the beard on her? You have to pat her, oh right, HIM, down, I can’t, I’m a female.'”

“I was never so f***ing embarrassed in my life. It was so traumatizing I didn’t fly again for about three years!” Alexander told CNN.

Alexander’s experience is, in fact, a common refrain among transgender travelers.

According to ProPublica’s report, transgender people reported varying levels of mistreatment, including multiple instances of being asked to show their genitals to agents — in spite of the TSA guidelines about passengers not being asked to reveal sensitive areas.

And yet the abuses against transgender people continue because of a flawed system that presumes gender at the screening stage.

The body scanners, also known as millimeter-wave scanners, were originally deployed in 2008 and updated to include Automated Target Recognition in 2013, according to Burke.

The update, mandated by Congress, displays a generic outline of a person on a monitor and highlights any areas on the body that might require additional screening.

The machines rely on fixed technology to identify objects on the body that don’t belong. When you step into the body scanner, the technology scans you and indicates areas on the body warranting further inspection based on bulges or anomalies that don’t align with what the machine was taught is the correct body part for the gender selected by the agent.

That means if the agent thinks you’re male and hits that corresponding button but the machine detects lumps on your chest, you may be flagged.

When the alarm is triggered, what follows are additional screenings intended to determine whether a prohibited item is present on the flagged individual. This added security measure frequently includes a pat-down.

On the experience of getting flagged by the body scanners, “it creates this vague sense of menace; that you’re being surveilled, being flagged as different. And you don’t know for what. It’s disturbing in that manner,” said Susan Stryker, presidential fellow and visiting professor of women’s, gender and sexuality studies at Yale University.

Stryker, who describes herself as having a “culturally woman’s name and post-surgical body,” acknowledges that as a Caucasian woman, she may carry privilege that other trans people do not.

Still, from 2009 to 2011, Stryker flew weekly between her home in San Francisco and her then job at Indiana University Bloomington, during which time she was flagged by the body scanners and subjected to pat-downs every single week.

“There’s this false belief that there’s something scientific going on,” Stryker said of the body scanner technology.

“But it requires an actual human being to look at another human being pink, or blue, and which button do I push to measure this body against? It’s just a machine of humans observing humans that import all the stereotypes — the scanner doesn’t get rid of that. In some ways, it intensifies it.”

In March 2019, Emma Smith, a New York-based transgender woman, was stopped by TSA at the security checkpoint in San Francisco International Airport.

“The machine identified a potential threat in my groin,” she said, after an agent pointed to the body scanner machine, which displayed a yellow square hovering over the crotch of a stick figure holding its hands in the air.

Smith was offered a choice to have a pat-down at the checkpoint or in private. She chose the private room option and told the four agents who accompanied her, “I’m trans, and I’m sure that’s what this is about.”

A female agent gave Smith a full pat-down — including the groin area — per protocol.

“I was shaking inside. I collected my things, put on my shoes, the door open now, wondering if the people waiting in line wondered if I was some sort of threat,” Smith says.

The experience was so unsettling it’s impacting Smith’s travel plans involving flying. Smith says she’s considering going to a conference in North Carolina. “The only thing holding me back is fear of encountering trouble while traveling. This includes the TSA, especially in areas known to be not so friendly to trans people,” Smith adds.

According to Burke, it’s at the discretion of the individual TSA agent to make a split-second decision about someone’s gender and hit the “male” or “female” button on the body scanner machine.

“It is unacceptable that in this day and age, TSA agents are not trained to deal respectfully and reasonably with the reality that many people may have bodies or articles of clothing that do not fit neatly into stereotypical assumptions about gender,” said Minter.

Agents do undergo training, according to Burke.

Still, there are enough cases where TSA agents have left trans people with troubling accounts of security screenings.

The TSA said in April it is exploring updating the body scanners to help streamline security for all travelers.

PreCheck, though, may not be worth the $85 (good for five years) for everyone.

Burke relays that anyone wanting the assistance of a passenger support specialist at the security checkpoint can contact the TSA Cares helpline at (855) 787-2227 in advance. That hotline is also available for questions about screening policies, procedures and what to expect at a checkpoint. Travelers can also reach out to @AskTSA on Twitter for support.

No More Vlogging (not clickbait)
Ilegal Launches A Rare Aged Mezcal
Holiday Gift Guide: The Best New Scotch Whisky Of 2022
Udaipur | India’s Beautiful City of the Lakes
Why you could skip Musée d’Orsay to visit this artist’s house-museum instead