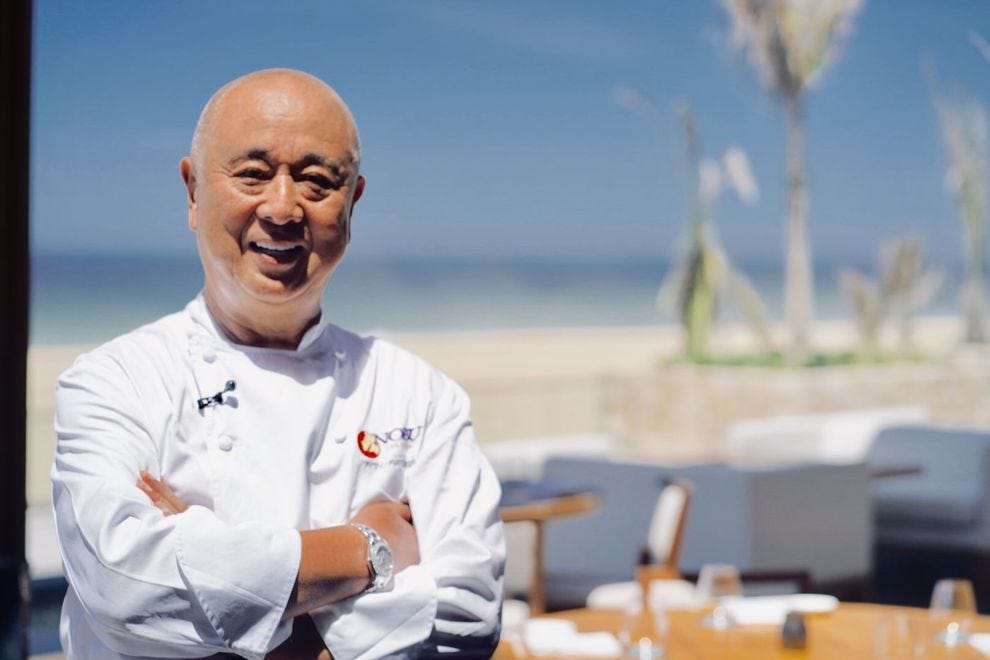 Chef Nobu Matsuhisa brings his first Nobu Hotel to Mexico with the opening of Nobu Hotel Los Cabos. It’s a bit off the Cabo beaten path, located on the western side of the southernmost tip of the peninsula, on the far side of the city of Cabo San Lucas.

Open since April 2019, the resort is slowly taking on visitors through the summer off-season months (the hottest and most humid time of year in Cabo) as they gear up for more guests in the fall.

That’s when the temperatures moderate and Cabo becomes the paradise that draws visitors in droves to this desert-like destination where it rarely rains. Nobu Hotel Los Cabos is the eighth of Matsuhisa’s hotel projects to open; Barcelona and Chicago are also opening in 2019, as he and business partner Robert De Niro rapidly expand their empire. 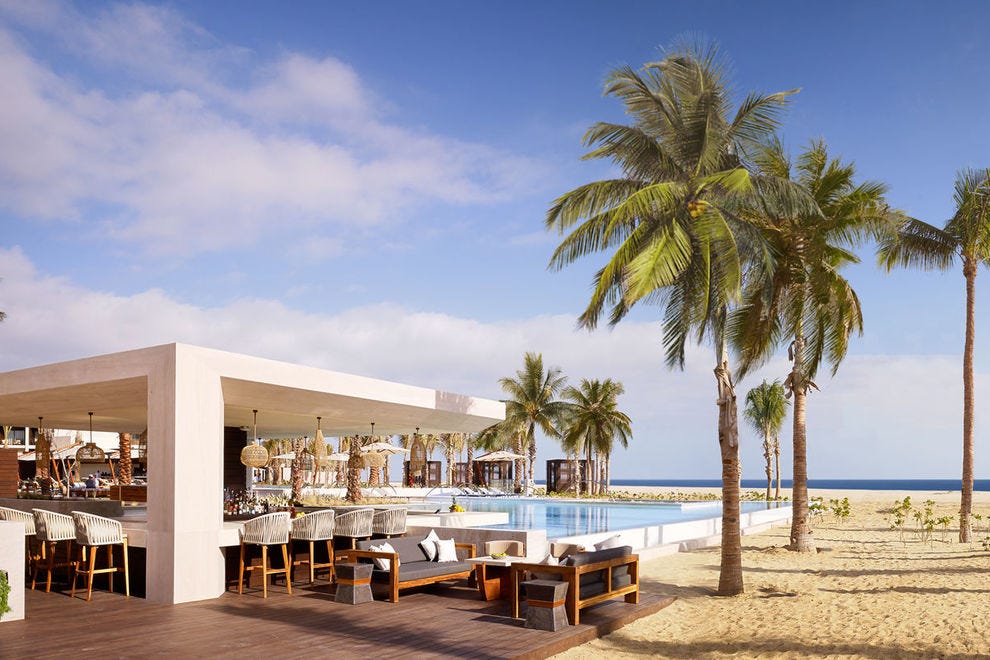 Chef Nobu recently stopped in for a visit, bringing along his wife and grandchildren, to take a look at what his team of talented local chefs and hotel staff have been serving up so far. The hotel includes a Nobu Restaurant, the latest outpost of his award-winning culinary empire that counts over 40 branches around the globe.

That’s where lovers of his inventive Japanese cuisine know they will find favorites like his signature dishes – melt-in-your-mouth black cod miso, swooningly delicious yellowtail jalapeño and crunchy rock shrimp tempura – each with a unique taste that lingers long after the last bite has disappeared.

As the famed chef explained while preparing delectable bites at the long sushi bar counter in the hotel’s Nobu Restaurant for a lucky group of diners, he doesn’t mind that many other Japanese restaurants have copied his iconic dishes, like the black cod miso, for example.

“I’m very proud that people love the black cod miso. I started making the cod before I was in Los Angeles, in Anchorage, Alaska. Then 35 years ago, I moved to L.A. and cod was twenty-five cents a pound, so it made sense [to serve at Matsuhisa, the first restaurant that made him famous]. But more important is that cod is a very soft fish and I blend it with the miso sauce and marinate it for three days. After three days, it’s cooked. That’s the traditional Japanese way to make it,” he said.

Nobu prides himself on the consistent quality of the fish and other ingredients used throughout his restaurants and hotels, but also makes use of locally sourced foods whenever he can. At the Cabo San Lucas outpost, they are growing herbs and vegetables in a garden on the hotel property and sourcing fish right out of the nearby ocean, so freshness is guaranteed. 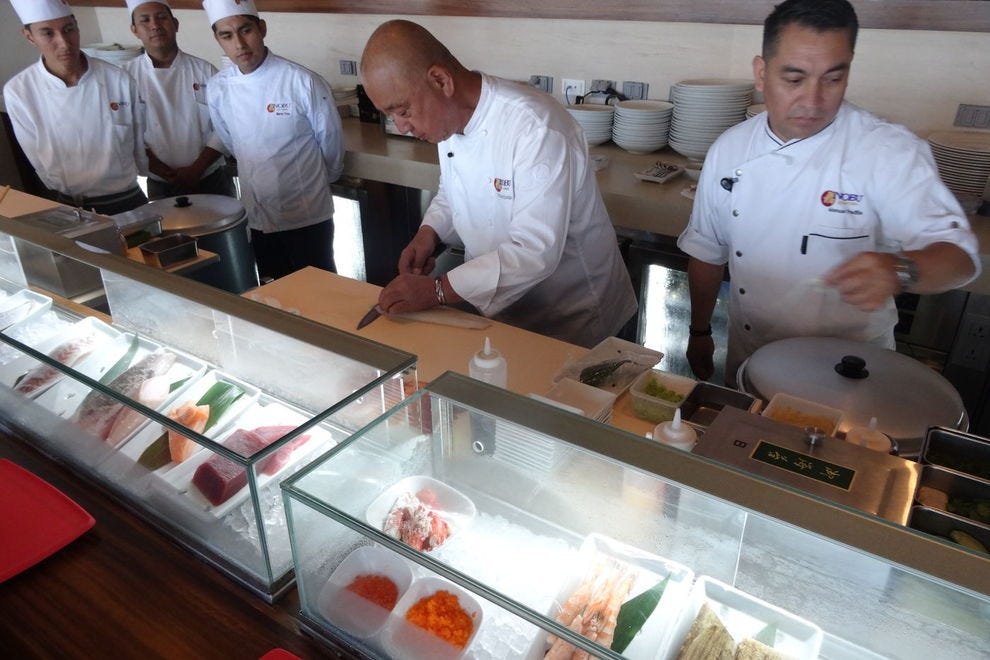 That fact was plainly obvious with Nobu behind the sushi bar, super-sharp knife in hand.

“You should eat sushi the moment it is handed to you,” the chef insisted. “When you eat sushi that has been put onto a big plate and brought to a table, it has changed. So the best way to eat sushi is sitting here, at the sushi bar. Immediately, one piece at a time. And also, do not add soy sauce. Too much soy sauce adds too much salt and changes the taste. I give you the perfect piece of sushi, you eat it just as I give it to you.”

That is his philosophy, no matter what sushi chef is working the bar; it is also his philosophy to bring up chefs under his tutelage as well, which is evident in “World of Nobu,” his recent cookbook release. He insists that this is his “last cookbook,” and it just may be, for the 70-year-old chef has spilled most of his secrets in the first section and stepped aside for the rest of the massive tome, giving 68 of his chefs and mixologists the chance to contribute their favorite dishes to the book.

But make no mistake, Chef Nobu Matsuhisa is not planning to retire from his life’s work. “I like to try as much as possible,” he said with a broad smile. “One day, maybe mentally, I will have to, but I never think about retiring. Why should I? I can still make sushi, I am still healthy, it is good.”

The dining experience at the Nobu signature restaurant is a definite draw of the Nobu Hotel Los Cabos, as well as the other culinary offerings, which include a Malibu Farms casual eatery, a swim-up pool bar and a private outdoor dining pergola enhanced with views of the ocean (and the sunset). 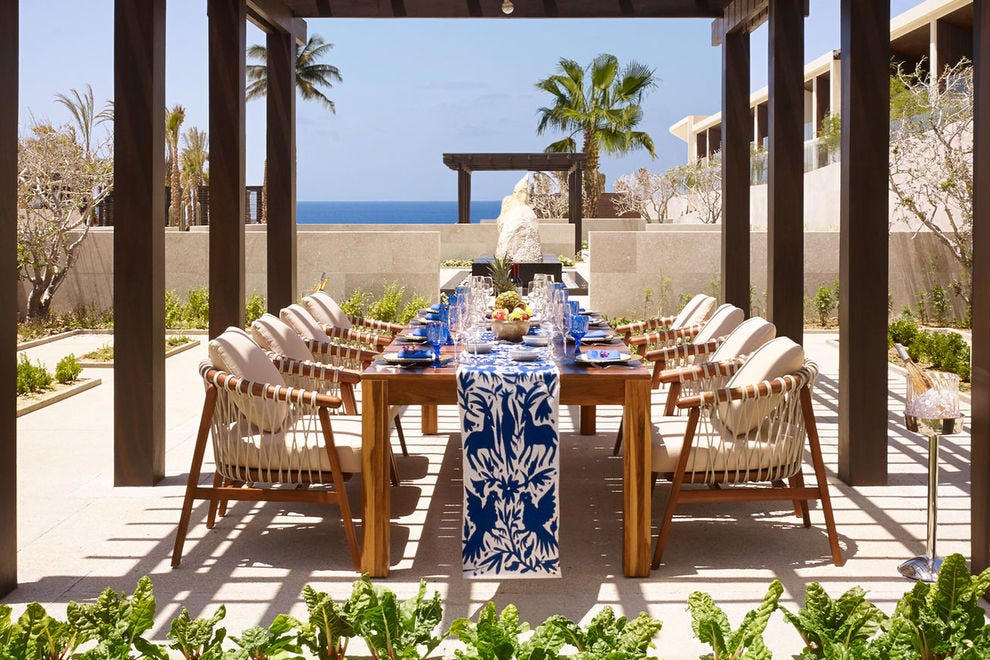 And there’s much more to this luxurious getaway spot than simply great food. With 200 rooms and suites, each one designed with a Japanese aesthetic that features clean lines, light woods and minimalist (yet comfortable) furniture, the resort makes you feel right at home.

The incredible bathrooms are complete with natural lighting, deep wooden Onsen soaking tubs and breathtaking rock walls. Some rooms have lovely views of the massive main swimming pool and the ocean beyond, while others have a “swim-up” feature, allowing you to walk directly from your hideaway straight into another, more secluded pool. 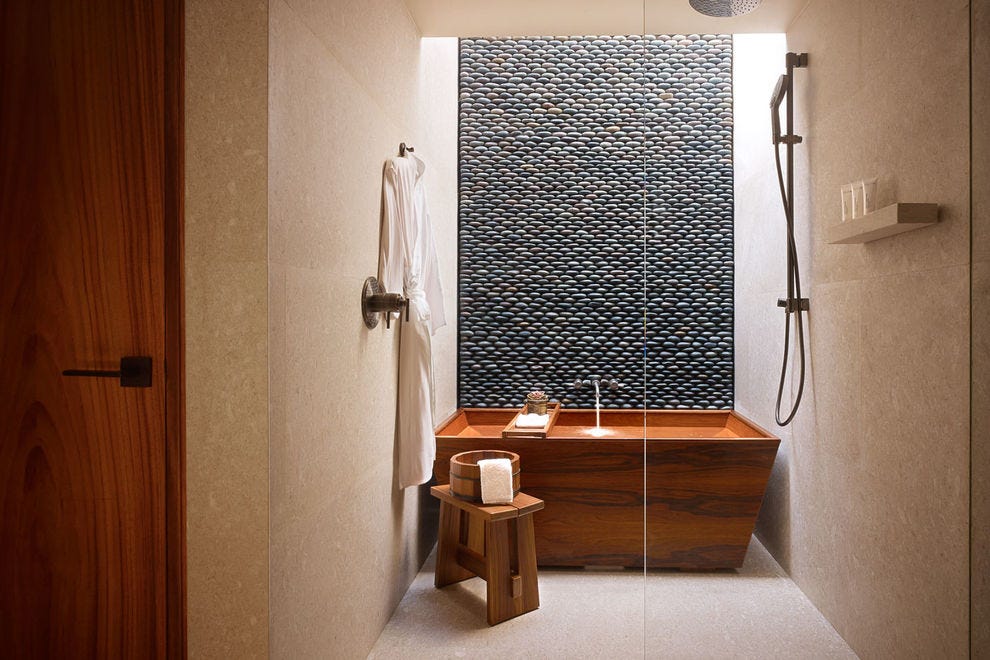 Over at the main pool, private poolside cabanas await, complete with personalized service and comfortable shaded spots designed for relaxation and comfort; the larger cabanas are even outfitted with outdoor showers. There’s spots on the sand to soak up some sun, a beach volleyball court to get your blood flowing and yoga classes, too.

Unfortunately, like many Cabo San Lucas resorts, there’s no ocean swimming allowed (the water is too rough), but if you book a trip to the famed El Arco rock formation found at the very tip of the peninsula, most of those excursions will also take you to a place where ocean swimming and snorkeling can be safely enjoyed. 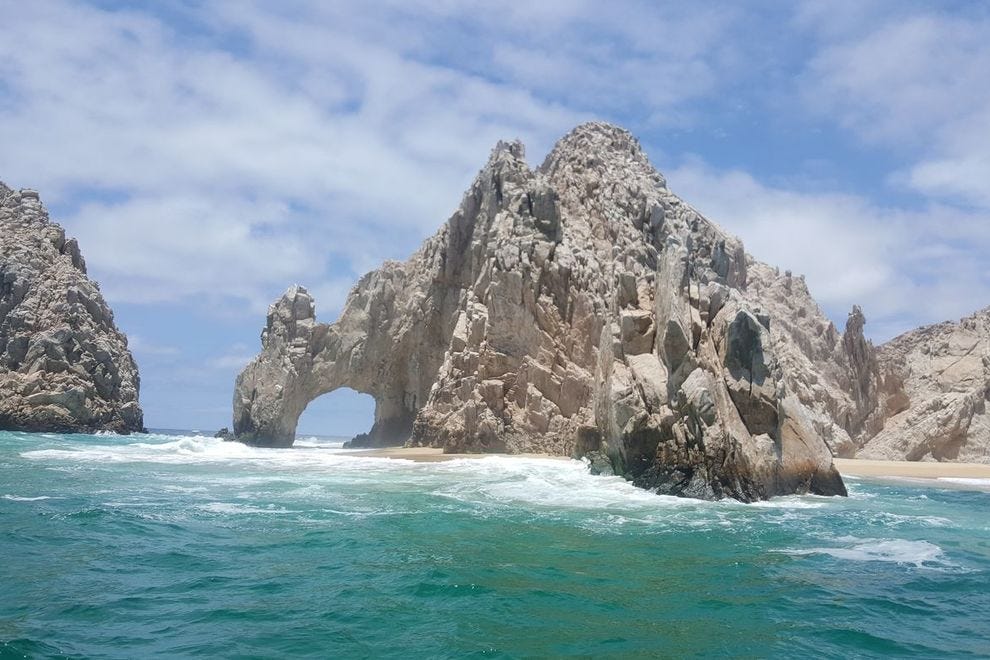 Golfers will find that the Nobu Hotel Los Cabos has a reciprocal agreement with Diamante, the private club just moments away from the resort, where two world-class courses await. The Dunes Course, designed by Davis Love III and rated one of the best in North America, is one choice, while the Tiger Woods-created El Cardonal is the other.

Access to both is included in a stay at Nobu. Even kids can play along, on the three-par, 12-hole Oasis short course, also created by Woods with beginners in mind. 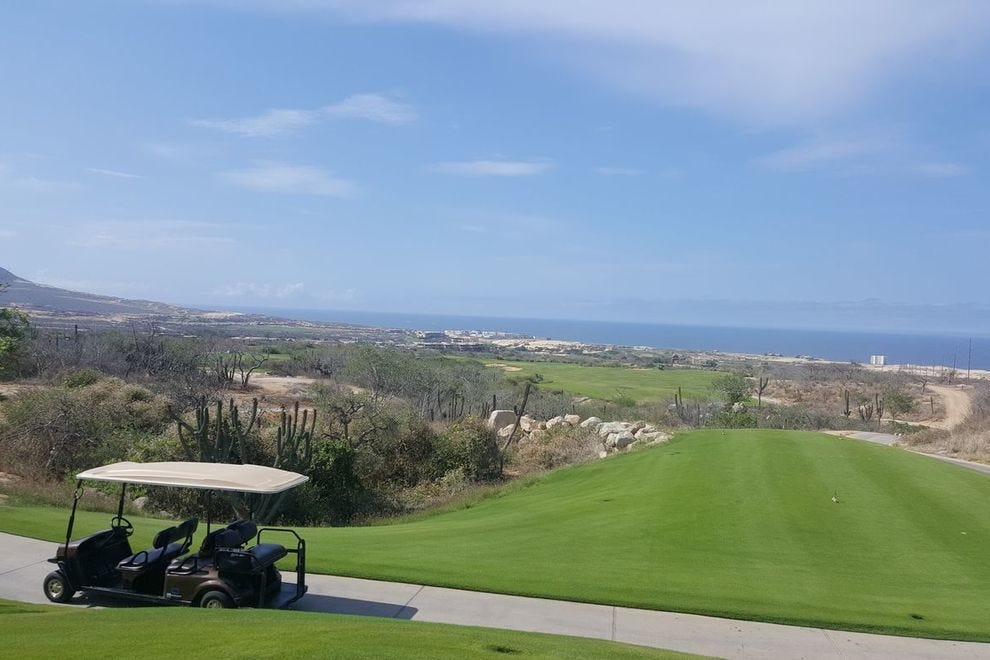 The Nobu Hotel also has a large, welcoming spa, with numerous treatments designed to restore balance and wellness after a long day of Cabo adventuring. Don’t miss the well-thought-out outdoor hydrotherapy garden, where going through the water circuit is a delight in itself.

With so much to do – or to just do absolutely nothing at all – the Nobu Hotel Los Cabos is a welcome addition to the Cabo scene, a getaway destination resort created for ultimate pleasure.

— If you book a hotel by clicking one of our booking links, 10Best may earn a small commission.

Surfing as Santa Claus in Venice Beach California
Tequila Herradura Legend Aims To Fill Luxury Drinkers Glasses
Holiday Gift Guide: The Best New Scotch Whisky Of 2022
Getting around Vancouver: How to see the city’s best sights, with or without a car
Cafeteria culture in Indiana: try the ultimate comfort food