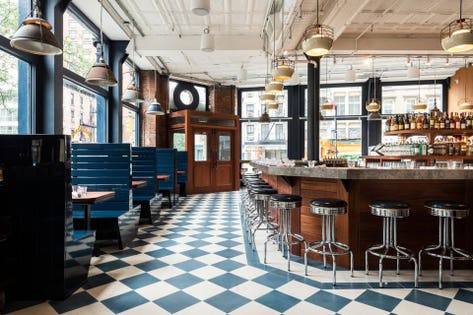 The first thing you notice are the windows.

The building on the corner of Canal Street and West Broadway has giant, cast iron ones between the banded limestone piers of the ground floor, plus a Beaux Arts-decorated transom window above the egg yolk-yellow door at the chamfered corner entrance. Light streams in, particularly during the golden glow of sunset.

Criminally, for twenty years, those windows haven’t seen or let it in the light of day.

For Anthony Martignetti, one of the minds behind Canal Street Oysters, which opened up in the space in September, the first order of necessary business was obvious. “The first thing I did was rip out the sheetrock and tear down the curtains and look out these massive windows,” he says. “It was liberating and exciting to be looking out windows that no one had looked out of for 20 years.”

On a recent Friday evening, the vast central limestone bar was where the main action was at, including one couple braving a medium-sized shellfish tower (they come in “Dinghy,” “Tugboat” and “Battleship” sizes), while David Bowie’s “Golden Years” and George Harrison’s “What is Life” played over the sound system.

The 1897 Beaux-Arts Rawitser Building at 285 West Broadway (or 380-384 Canal), at the southeast corner of a dynamic intersection, was designed by the architectural firm Brunner & Tryon. In its earliest years it was home to, among others, International Arithmachine Co., who produced “The Arithmachine”—a small mechanical device that performed adding, multiplication, division and other complicated arithmetical functions (“Saves experts mental strain!”).

In the 1940s, the ground floor was home to Roberts Arts Gallery, which served as a bookstore and curiosity shop as well as a gallery. Its eccentric owner, Henry C. Roberts, was a celebrity occult pundit who claimed to be the reincarnation of Nostradamus. In the 1980s, as Smoke Stacks Lightnin’ bar, it offered a $6.50 brunch, and was noted, by New York Times restaurant critic Moira Hodgson, for its “restful” quality as well as its “large convivial bar” and, of course, those windows (“[It] is pleasant at sunset for a drink”). In 1990 it became the jazz cabaret Tsubaki House and, at some point, those windows were closed to the world. As recently as earlier this year, Redditors were fearing for the building’s fate.

In Anthony and Tom Martignetti—the restaurateur brothers behind The East Pole, East Pole Fish Bar, Pizza Beach and Brinkley’s—the latest incarnation of the storied ground-floor space couldn’t be in better, more able hands. While in a broad sense Tom’s focus is the business side of things, Anthony, drawing on his college studies in sculpture, designs the restaurants, and even gets involved in the construction—he built the white lacquered tables at Pizza Beach and the copper bar at The East Pole, for example.

Think of the look and feel of Canal Street Oysters as restrained nautical chic: checkered floor, polished mahogany, plenty of what I make to be Pantone 303 C and an exquisite vestibule. The aforementioned bar, too, is embedded with shell fossils.

For Forbes, Anthony graciously shared his design philosophy, his love of this remarkable space, and explained his particular approach to Canal Street Oysters.

Firstly, Anthony, can you tell us about the spark of an idea that led to Canal Street Oysters? What was the void you sensed and wanted to fill?

I am really just trying to create the oyster bar that I thought New York was missing: a big, boisterous, casual, oyster and drink-filled bar. There are some great small and fancy oyster bars and then there is Grand Central, which I find lacking in regards to food and beverage; there just wasn’t a grand oyster bar which speaks to the current generation of oyster fanatics, craft beer and natural wine drinkers.

Rewinding a bit, can you tell our readers how a sculpture student ended up doing what you do, and how you continue to draw upon that education?

Moving to New York at 20 to be a metal sculptor, I quickly realized I needed not only a place to put my finished sculptures but people to buy them. So I started making furniture and founded a company, Uhuru Design, in Red Hook with two friends I who were looking to do the same. Starting any company, especially one where you need a studio, lots of tools and material needs some capital and I was lucky enough to wrangle my way into some good bartending gigs around town. At one of those bars, I also convinced the owner he need to remodel to keep up with the times and offered my design and build services which were accepted and I designed, built and then bartended this new addition to an infamous old bar. At this point a lightbulb went off and I thought, Hey, I should really just do this for myself; and here I am regretting that decision every day, 15 years and ten bars/restaurants later.

Walk us through your design for Canal Street Oysters. What were your objectives with the look and feel for the space?

The scale and shape of the room finally gave me an opportunity to build a large bar in the center of the room instead of on one wall like at most places you go. I knew that if I made the bar the focal point with oysters displayed on ice and being shucked, draft beer being poured, drinks shaken and guests watching from all around it would create an anchor and imbue the whole room with its energy. The large bar with 30 seats and the front window looking over Canal Street also add the bar seating which I—and most New Yorkers—love to sit at.

Those giant windows create a tremendous sense of place. Any thoughts on the location, and any other design details you’d care to highlight?

Before we took the space it had been a nightclub for decades and the windows had been covered and the room turned inwards without any interaction with the dynamic corner of Canal and West Broadway. The first thing I did was rip out the sheetrock and tear down the curtains and look out these massive windows; it was liberating and exciting to be looking out windows that no one had looked out of for 20 years and imagining what it would be like to bring this view to our guests sitting there at the window seats looking out on bustling Canal Street over some oysters and a cold beer as people did in the late 1800s when Canal Street was filled with oyster bars.

Lastly, you not only design your projects, but get your hands dirty in the construction. What do you personally gain from being so involved in every aspect of realization?

Well as the designer, contractor and quite often the carpenter, demolition man or painter, I get to change my mind really quickly when I think I have a better plan. It also means that I don’t have to have everything figured out months ahead of time and signed off on and approved. The tables can change and the lights can change and bar top itself wasn’t even ordered until a month before opening. I learn so much about the space by spending so much time in it and thinking like a future guest and trying to interact with it like our bartenders, chefs and servers will as well; a restaurant cannot just be aesthetically pleasing, it has to function smoothly and in manner commensurate with the style of service you want to have. At the end of the day, I have to be extremely happy with how the project turns out as I am my harshest critic…and if I’m happy, then there is a chance the guests might be as well.