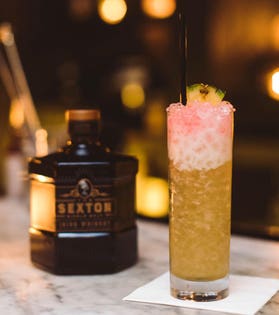 Designed as an after-hours destination for the hard-working people in the restaurant industry, The Sexton Single Malt Irish Whiskey debuts The Sexton Midnight Club, a late-night culinary experience ‘For Chefs, By Chefs’ celebrating the men and women leading today’s modern food and drink scene. The traveling party has successfully celebrated restaurant industry folks in New York City and New Orleans and will arrive in Austin on October 23.

Seeking to herald the changing face of the culinary landscape, The Sexton is championing the new generation of chefs that have used innovation and perseverance to rise to the top, and they encourage the public to raise a glass in honor of those who dedicate their days and nights to bring us the very best culinary experiences.

Host chefs invite their peers in the industry to attend each event, which is meant to feel like a dinner party with close friends. Each host chef curates their own menu to honor the local chef community, with food and drinks featuring The Sexton whiskey.

“The Sexton Midnight Club is a series of exclusive ”for chefs by chefs” experiences born out of the idea that we are in the modern era of food and drink,” says Jack Ferris, The Sexton brand ambassador. “Eating and drinking well is no longer reserved for white table cloths and fine wines; it’s all about chefs who are doing things differently in the culinary space comparable to how The Sexton behaves in the whiskey category - the modern malt for the everyday.”

The Sexton Single Malt Irish Whiskey is a recently launched single malt, crafted with 100% Irish malted barley and triple distilled in copper pot stills resulting in a smooth, light and fruit-forward spirit. The barrels are hand-selected from European oak, air dried for a minimum of 16 months, toasted to a medium-high level and seasoned with Oloroso Sherry for two years before shipping to the north coast of Ireland.

The whiskey is aged for four years to achieve a perfect balance between rich, dried fruits and toasted oak notes. Master Blender Alex Thomas, one of the few female master blenders in the world, has spent over 13 years honing her craft.

For the Austin celebration the team selected Holy Roller, the whimsical all-day brunch restaurant helmed by Callie Speer. Since opening in July 2017, Holy Roller and Chef Speer have received numerous accolades and recognition. Named “Eater Chef of the Year” in 2017, Speer was also a 2013 Food & Wine Magazine “People’s Best New Pastry Chef” nominee and a 2015 Culturemap “Pastry Chef of the Year” award-winner.

Prior to opening Holy Roller, Speer helped craft the pastry and bread programs for some of Austin’s most lauded dining destinations including Geraldine’s and Café 605 at Hotel Van Zandt, Parkside, Jeffrey’s, Swift’s Attic, Delish Bakery and Wu Chow.

“When The Sexton Midnight Club approached me to host the club in Austin I was really intrigued,” says Speer. “It’s not so often that anyone wants to cater to people in the restaurant biz – that’s usually our job! – so I loved the idea. A late-night club for chefs and bartenders to gather and eat and drink well? Couldn’t ask for a better way to unwind and catch up with friends.”

Speer is going to have friends crawling out of the woodwork to get an invite. Check out the food that will be enjoyed by her guests.

Spain adds long-distance buses to its free train and transit journeys
Why kids will love New Orleans as much as you do
For The Love Of Ice-Cream: Why An Upstate Auto Dealership Opened An Ice-Cream Shop
The best Edinburgh hotels with parking
A Family Wine Estate Lost While Dealing With Father’s Alzheimer’s