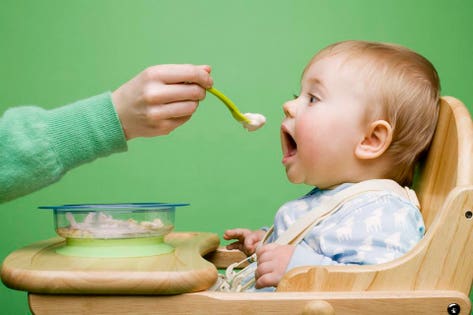 Heavy metal music is one thing. Heavy metal in baby food is something completely different.

Senator Chuck Schumer (D-NY) just expressed concerns about the latter. His views about the former are unclear.

After the Healthy Babies Bright Futures report recently came out, Schumer tweeted out the following:

According to the report, 95% of baby food containers tested had “toxic heavy metals.” Oh, baby, baby, that does not sound good.

The testing involved checking 168 containers of 61 brands of 13 different types of baby food for four types of heavy metals. Arsenic was in 73% of the baby foods tested, cadmium in 75%, mercury in 32%, and lead in a whopping 94%. In fact, 26% of baby foods tested had all four of these metals, and 40% had three of them. As Marty McFly said in the movie Back to the Future, that’s heavy.

These weren’t bullets and batteries that were being tested. Rather they were things that go into the mouths of little Johnny, Janey, Baby Groot, Zuma Nesta Rock, Pilot Inspektor, or whatever you end up naming your baby. The baby food products had come from 17 different retailers (supermarkets, dollar stores, baby stores, and superstores) located in 14 different metropolitan areas. The 13 types of baby food included puffs and other snacks, teething biscuits, infant rice cereal, infant cereal (multi and non-rice grains), fruit, vegetables, mixed fruits and veggies, jars of meat, infant formula, apple juice, 100% fruit juice, other drinks, and meals (veggies, grains, pasta, meat combos).

This is not the first analysis to find such heavy metals in baby food. For example, according to an Environmental Defense Fund (EDF) report, 20% of baby food sampled by the Food and Drug Administration (FDA) had detectable levels of lead. This was based on an analysis of the FDA’s Total Diet Study (TDS) data from 2003 to 2013 that included 2,164 samples of baby food and 10,064 samples of other food. Lead appeared in at least one sample in 52 of the 57 types of baby food and was particularly common in fruit juices (89% of grape, 67% of mixed fruit, 55% of apple, 45% of pear) and root vegetables (86% of sweet potatoes and 45% of carrots). There was also lead in many baby cookies: 64% of arrowroot cookies and 47% teething biscuits.

Then there were these Consumer Reports findings covered by Good Morning America last year:

In her song Toxic, Britney Spears asked, “don’t you know that you’re toxic?” Even though Spears is not a heavy metal artist, the words do apply to arsenic, cadmium, lead, and mercury. In the body of a growing child, such heavy metals may interfere with normal brain and body development. For example, as the Centers for Disease Control and Prevention (CDC) indicates, “no safe blood lead level in children has been identified. Even low levels of lead in blood have been shown to affect IQ, ability to pay attention, and academic achievement. And effects of lead exposure cannot be corrected.”

Why are these heavy metals even in baby foods? After all, baby products typically don’t have names such as “Lead and Lettuce”, “Mercury Meringue Pie”, “Arsenic, We-senic, You-all-senic”, or “Cadmium Easter Bunny.” Some of the metals can be from the environment, which would be more evidence that something needs to be done about better controlling pollution. Additionally, machines used to chop, grind, package, and otherwise process baby food could be introducing various substances into the food. This is yet another reason to be wary of processed foods.

The bottom line is that heavy metal and babies should not mix. Musically, head banging is not good at that age. Chemically, exposure could lead to brain and body problems. It isn’t even clear what levels of such heavy metals in food may be safe, especially since exposure can accumulate over time from other sources such as the environment. How might exposure to these metals be related to rising rates of conditions such as autism and attention deficit hyperactivity disorder (ADHD)? How well is our food supply being monitored for contaminants? There is a lot of unfinished business when it comes to the safety of our food supply. Any threat to our food supply is serious stuff. As David Carradine said in the movie Kill Bill, baby, you ain’t kidding.