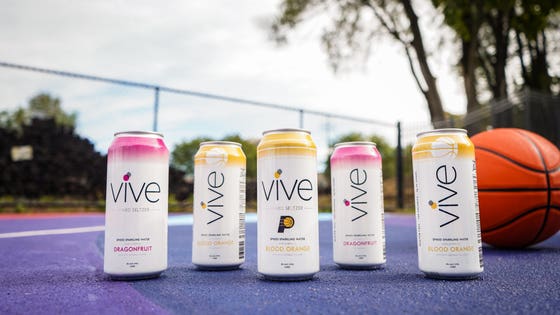 With the so-called summer of spiked seltzer now in the rearview mirror, one craft brewery is turning its attention to the winter of hard water.

The deal gives the small Cincinnati-area beer maker access to selling opportunities inside Indianapolis’ Bankers Life Fieldhouse and enables the company to use the Pacers logo on packaging.

It’s the fourth major professional sports sponsorship that Braxton has inked since it launched the Vive brand in March, including similar deals with the NFL’s Cincinnati Bengals, the NHL’s Columbus Blue Jackets and FC Cincinnati in the MLS.

The partnerships have given Braxton the ability to feature team logos on Vive packaging and marketing materials, and enabled the company to activate the brand in the marketplace through co-branded promotions, but they have also come with a mid-six figure price tag.

So why would a relatively unknown hard seltzer brand from the Midwest go after expensive sponsorships that are traditionally reserved for larger companies with bigger marketing budgets?

“This gives us the chance to get liquid to lips in a scalable way,” he said. “Our deals with these teams helps us build instant credibility, while driving sampling in local markets.”

And since Braxton is allowed to use team logos and other imagery on “commemorative cans” and special variety packs, the deals have also led to lucrative retail authorizations at chain accounts like Kroger, Meijer and Walmart, among others.

“It signals to key buyers that we are willing to invest in this brand in a very big way,” Rouse said, adding that his company earned its first shelf placements at Walmart as a result of the professional sports affiliations.

Braxton has also created billboard and radio ads to help drive off-premise sales of Vive, which is now available at more than 700 retailers in the greater Cincinnati area, and purchased additional fermentation tanks to keep up with increasing demand.

Rouse said Braxton’s substantial investment behind the Vive brand helped his company secure meetings with retailers who have been tasked with sorting through more than six dozen hard seltzer brands that are all fighting for spots in the spring 2020 sets.

“It gives us a really great story to tell, especially when we’re competing in the hottest category in adult beverage right now,” he said.

Indeed, there are now more than 75 hard seltzer brands being sold across the U.S., up from just six in 2016. All of the major beer companies are investing in hard seltzer – some with multiple product lines – and numerous craft beer makers are making a run at the space as well.

Meanwhile, Constellations Brands and Anheuser-Busch are also preparing to launch Corona and Bud Light hard seltzer line extensions, and Rouse expects those brands to get significant attention from retailers.

Since slotting fees – supplier payments made to retailers for guaranteed placements – are illegal in beer, major sponsorships like the ones Braxton has inked are critical as smaller companies work to earn share of mind with their wholesaler and retailer partners.

“We are investing significantly in getting the product off of their shelves,” Rouse said.

Braxton’s strategy appears to be working. The Vive line has already grown to become 28% of the brewery’s overall business in just six months, a figure Rouse believes could grow beyond 30% by the end of the year.

The growth of Vive has also contributed to increased beer sales, as accounts have added various Braxton offerings to the mix.

“It has provided an incredible halo for the beer business, and we are now able to have more conversations with buyers about Braxton and Vive together,” Rouse said.

However, competition for these sponsorships is heating up. Most of the larger players have aligned their brands with major sporting events, including Mark Anthony Brands which inked a Kentucky Debry sponsorship for White Claw in April, and Boston Beer which recently announced struck a five-year deal with the NHL for Truly. Meanwhile, Anheuser-Busch’s Bon & Viv brand is the official hard seltzer of the NFL, and its Natural Light hard seltzer line extension is the official hard seltzer of the Big 12 Conference.

As all of these companies grapple for market share in an ever-crowding hard seltzer market, industry watchers are questioning how big the sector will get and which brands will succeed.

Brewers Association chief economist Bart Watson estimates the category could grow to 55 million cases in 2019 (about 2% of total beer volume), while longtime beer industry analyst Robert Ottenstein with Evercore ISI believes hard seltzer is poised to become 5% of total beer volume by the end of 2021.

White Claw and Truly will likely capture the lion’s share of that growth, but other brands could emerge as strong third or fourth options at the regional level.

I’ve personally tracked 80 different hard seltzer brands, and the vast majority of them check in at 5% ABV, 100 calories, one gram of sugar and two grams of carbs.

Moving forward, the most difficult part of competing in a segment that is now worth $1 billion will be articulating a unique point difference – something Braxton has demonstrated it is willing to invest behind as it works to cut into White Claw and Truly’s combined 75% share of the hard seltzer market.

First-timer’s guide: There’s so much more to Pittsburgh than steel
California Museum Under Attack by Evil Presence | The Dead Files | Travel Channel
Paris Train Stations Explained: Which One Is For You?
Unexplainable Music Echoes Through Tunnels | Destination Fear | Travel Channel
Introducing Finland