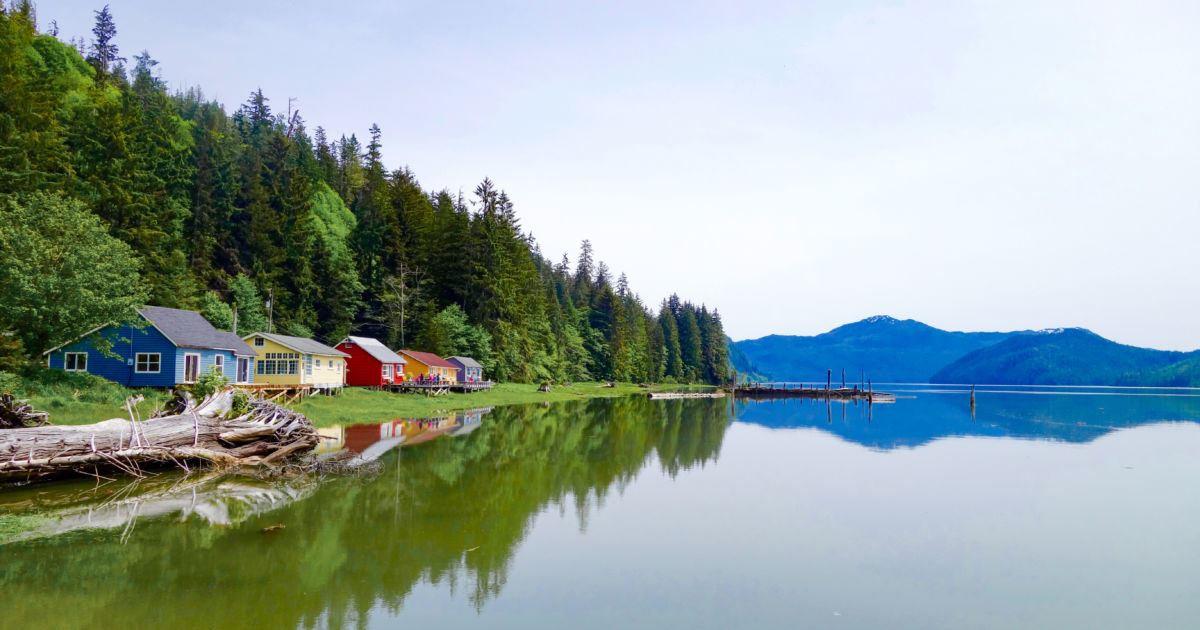 Fresh off the back of researching their new guide to glamping, Comfortably Wild, Mike and Anne Howard have some things to say about the outdoorsy travel trend. Here are their favorite glamping spots in North America under $150.

You don’t have to be Prince Harry on honeymoon to afford unforgettable glamping destinations. There are tons of budget-friendly glamping options throughout North America, places where incredible outdoor experiences are right next to luxurious campsites packed with all the amenities of a five-star hotel. You just need to know where to look to find them.

To research our new book, Comfortably Wild, we spent three years, traveling 73,000 miles across 9 countries in search of the best glamping destinations in North America. Even after staying at Relais & Châteaux treehouses and Forbes Five-Star Ranches, some of our favorite outdoor getaways were those under $150 a night. Packed with character, natural beauty, and unconventional experiences, these affordable picks will make you feel like you’ve struck it rich.

Take the train through the Canadian Rockies and along the Skeena River to the secret stop: Cassiar, the former metropolis of the BC fishing world. Over the course of 107 years, tens of thousands of workers from around the world ran 22 different canneries along these shores. The last one standing and longest consecutively operating cannery on the West Coast was none other than Cassiar. Walking the historic grounds with Justine Crawford and Mark Bell, owners of this salmon-cannery-turned-glamping retreat, this forgotten world comes into focus. With their vivid descriptions, you can imagine the expansive dock, net loft, machine shop, and general store bustling with life. The five jewel-colored cottages with waves lapping beneath their porches, once the homes of the cannery managers, are now yours to enjoy. Take a jet boat to see the remnants of fellow canneries, or catch some salmon of your own. Want to dig deeper into the area’s history, ecology, or meditative qualities? You’ll love their multiday retreats.

What do you get when you cross Airstream trailers, a brewery, a music venue, and snowcapped mountains with an art colony? Glamping heaven. Taos Mesa Brewery was built on 24 acres to relish the stunning scenery of the Sangre de Cristo Mountains and have ample space for festival camping. Seeing people enjoy themselves at multiday concerts, brewery cofounder Dan Irion and his brother Ryan (a civil engineer that designs RV parks), had the brilliant idea to create Luna Mystica. Each camper has been renovated with the stories of their original owners and travel history top of mind. You’ll meet Ralphie, the Airstream who spent 55 years cruising the valleys of New Mexico, and Rosie, who was in a traveling circus and decorated to reflect her gypsy flair. Staying next to the hottest music venue in Taos affords a rare combo of being in nature and the heart of the action. For even more culture, you’re 15 minutes from the art galleries downtown and the Unesco World Heritage site of Taos Pueblo.

With the opportunity to watch the lava flow at Hawai’i Volcanoes National Park, stargaze from the tallest mountain in the Pacific, and stroll green sand beaches, anyone would want to stay on the island of Hawaiʻi – but you’re the savvy traveler that knows a big-box hotel isn’t the way to experience its natural beauty. Stay at Honaunau Farm and you’ll have pristine forest all the way from your ocean-view cottage to Mauna Loa volcano. From this organic farm, you can easily access the tourist attractions while having the local insights and hands-on access to Hawaii’s bounty. See the landscape from the eyes of a permaculturist, learn the latest in medicinal hemp, take a class on regenerative farming, and eat all the tropical fruit you can carry back to your safari tent or tea house. Honaunau brings the Big Island back to its purest form.

Planting seeds since 1941, the Schnepfs are excellent farmers, nationally renowned for their peaches, but their ambitions were always bigger than stone fruit. Looking to celebrate the farming heritage of Maricopa County, Arizona, they have restored the area’s historic farmhouse buildings, created a U-pick veggie patch, and they host nearly 100 days worth of festivals per year. To further immerse guests into their 300 acres of orchards, forest, and fields, they opened Cozy Peach glamping, with 10 vintage travel trailers. Just the right blend of nostalgic and contemporary, each camper has been polished like a gem. Take one of the complimentary John Deere bicycles for a ride among 5,000 peach trees, and join the farm happenings – including gardening, a cooking class, or one of their multiday festivals with live music, vintage amusement rides, and crafts.

Tamarindo, Costa Rica, is known as one of the world’s best beaches to learn surfing. Dive in with a seven-night stay at Dreamsea’s surf-camp-meets-yoga-retreat. Settle into your bell tent, complete with private deck to enjoy the jungle’s tropical birds and acrobatic howler monkeys, and meet your professional instructors and new surf buddies. Try the breaks at any of their four neighboring beaches, then stretch it out each evening with some downward dog. Promoting a healthy lifestyle, the chefs embrace Costa Rica’s tropical bounty and spice it up with global recipes. Stay for a one- or two-week session (it’s all-inclusive for less than $100 per person per day), or make it a true Endless Summer by applying to be a volunteer in exchange for free room & board (yeah, both kinds).

Many city folk like the idea of a nature getaway, but may feel a little better knowing that top-notch restaurants, art galleries, and Pilates studios are nearby (you know, in case of emergency). When the founders of Mendocino Grove spotted a property on the wooded bluffs of the Pacific, just a quarter-mile from downtown, they thought, “This is the yin and yang we all need.” Mendocino was once a prosperous logging town with Victorian mansions but today the 19th-century buildings are now home to bookstores, coffee shops, organic markets, and fantastic restaurants. Trees once cut at the mills are now protected by seven state parks within a 10-mile radius. From Mendocino Grove, you can access hikes into the grand fir forest, vegan white-tablecloth meals, and award-winning theater…without even getting into a car. Though with a camp this seductive, you might never make it to town. Breakfast is served in the meadow followed by weekend yoga, your tent has ocean views, and a s’mores kit can be delivered right to your fire ring.

Inspired by the fanciful architecture, decor, and pursuits of medieval European nobility, Good Knights is where you can play princess and feel like a king. After a decade of hosting a Renaissance fair–style festival on their property in the Alberta countryside, they decided to keep the fantasy going for guests all summer long. They built a feast hall, longbow archery range, tournament field, classical arts studio, and lavish tents, all in 14th-century fashion. In 2017 they opened their wooden gates and were an instant hit with the fantasy crowd. But the real test of their success? Skeptics like us. We initially came for the novelty of Good Knights, but after seeing everyone dressed up, learning new skills, and frolicking in merriment, we couldn’t resist the magic of this place.

After working as a physician around Jamaica for decades, Dr. Paul Rhodes had a vision for a resort that would celebrate the country’s West African roots and aid his humanitarian work. Collaborating with local architects and artists, Great Huts has built African-inspired structures with motifs from the Akan, Igbo, Ibibio, Mandingo, and Yoruba tribes (from which most Jamaicans descend). Bamboo huts, almond treehouses, stone towers, millet silos, and royal-themed rooms showcase African art and antiques alongside local works. More than 250 pieces of art adorn the seaside property, and various cultural events, including four-day art and film festivals, happen throughout the year. A portion of each guest’s stay and all proceeds from the festivals support eastern Jamaica’s only homeless rehabilitation center, cofounded by Dr. Paul (as he’s fondly called around the island). If you’re looking for even more good vibes at Great Huts, just practice yoga overlooking the Caribbean Sea, soak in the cliffside pool, or dance the night away to live reggae.

One of the only bubble hotels in North America, Campera Hotel Burbuja’s spherical tents line up like a string of pearls against the Docepiedras vineyard of Baja California. A well-crafted French design pressurizes the bubble so that only a thin clear wall separates you from the vines and the Milky Way. Draw back the privacy curtains on your canopy bed and catch a shooting star without leaving your silky sheets. Wake up to a sea of vines and a day of vineyard hopping at Valle de Guadalupe’s 80 wineries, or just open your minibar to sample the wines grown from grapes outside your see-through door.

Joanna Cahill doesn’t just own Asheville Glamping; she lives it. While dreaming up the concept for this ultra-hip glamp camp, Joanna lived in a yurt she built herself. When she was able to buy the rolling hills just 10 miles north of downtown, she moved into a vintage trailer to save up for geodesic domes. Today the 18-acre property is a glamper’s candy shop, with 5 completely different structures – from bell tents to treehouses. Having started this glamping business in her 20s, she knows what millennials want—a two-story dome with a corkscrew slide to get down to the living room. They want the opportunity to chill around a firepit with views to the Blue Ridge Mountains and hop an Uber when there’s a good indie band in “Beer City,” USA. So whether you’re a hipster or a hiker rolling through North Carolina, you know where to stay.

This article is adapted from Comfortably Wild: The Best Glamping Destinations in North America, published by Falcon Guides and written by Mike & Anne Howard of HoneyTrek.com.